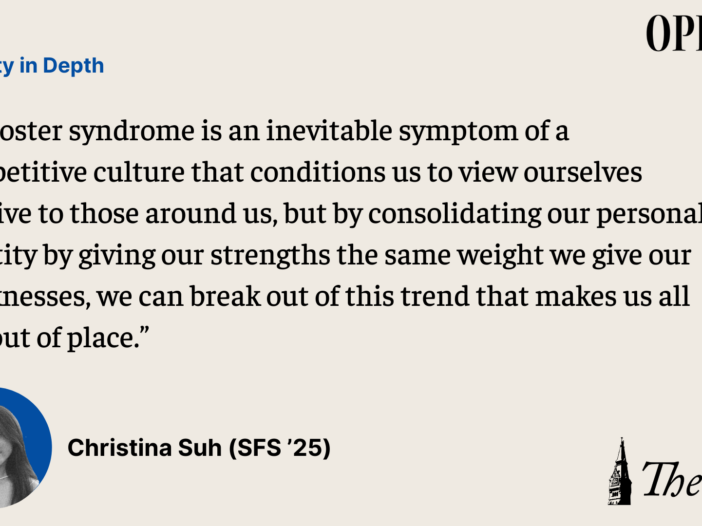 Georgetown University welcomed its class of 2026 on March 29, bringing a very competitive application season to a close. The glee among prospective Hoyas reminds me of my own joy over a year ago.

However, this time is also a sour reminder of the feelings of rejection that inevitably stained my decision week. The mercurial rush of the college application season — this liminal space of highs and lows — is a defining, coming-of-age moment for high schoolers.

This choice to spotlight our accomplishments when we succeed and our failures when we don’t reveals an inherent vulnerability that strains our conceptions of ourselves. However, we should be doing the very opposite.

My Georgetown acceptance was a potent dose of validation, but it wasn’t permanent. When I arrived on campus, I was surrounded by peers who had achieved the same feat, dulling any edge that I may have previously felt I had.

A selective school like Georgetown can easily induce a sense of nonbelonging for the individuals that make up the student body, manifesting in imposter syndrome. Predicated on notions of relative inferiority, imposter syndrome is a deep-rooted personal insecurity brought to the surface by external factors.

It’s easy to look up and see people who appear much more confident, more accomplished, more able and subsequently internalize these comparisons as indicators of your own shortcomings. This process can happen anywhere, but the harsh reality is exacerbated when you’re extracted from a small pond and dropped into a big one.

Georgetown is indeed a big pond, filled with big fish. And it feels like there’s limited space, making the pond a non-conducive environment for growth.

Because even if you’re sufficiently motivated by an internal pressure to catch up with your peers, it’s impossible to do so when external circumstances don’t let you try.

Exclusivity breeds a vicious cycle of depreciating self-worth, and Georgetown’s notorious club culture is a prime example. Students want to get involved, proven by the influx of applicants that clubs attract every semester.

But with high rates of application come high rates of rejection, effectively killing any personal effort to grow. Rejection comes as a shock to anyone, but when you’ve been historically proven academically competent by statistics like a 12% acceptance rate, the blow can be especially crushing. What feels like personal failure, placed in the context of a campus where 92.9% of the student body participate in extracurriculars, perpetuates the inferiority complex that contributes to imposter syndrome.

It’s easy to question your identity when enveloped in feelings of inferiority. Your strengths are shrouded by your weaknesses, and the very things that establish your character feel threatened. The way we understand ourselves is left vulnerable to external influences, and our sense of self is obscured by how these externalities diminish our self-worth.

Imposter syndrome is founded on the assumption that we alone are the interloper, that our identity uniquely fails to stand against everyone else’s.

Almost 70% of people feel like imposters at one time or another, which reveals the fallacy of the phenomenon itself. We must recognize that we are fine-tuned to fixate on our inadequacies while we remain ignorantly blind to the weaknesses of others. In a desperate attempt to prevent the revelation of our own fraudulence, we present the most polished versions of ourselves by maximizing our strengths. Consequently, our perceptions of our peers are based entirely on what they want us to see, but we don’t have the same privilege of selective perception in judging ourselves. Your own impostor syndrome likely contributes to someone else’s, making you a perpetrator as well as a victim.

So to both future and current Hoyas alike, understand that perceived inferiority is a systemic plague, not an individual one. Imposter syndrome is an inevitable symptom of a competitive culture that conditions us to view ourselves relative to those around us, but by consolidating our personal identity by giving our strengths the same weight we give our weaknesses, we can break out of this trend that makes us all feel out of place.