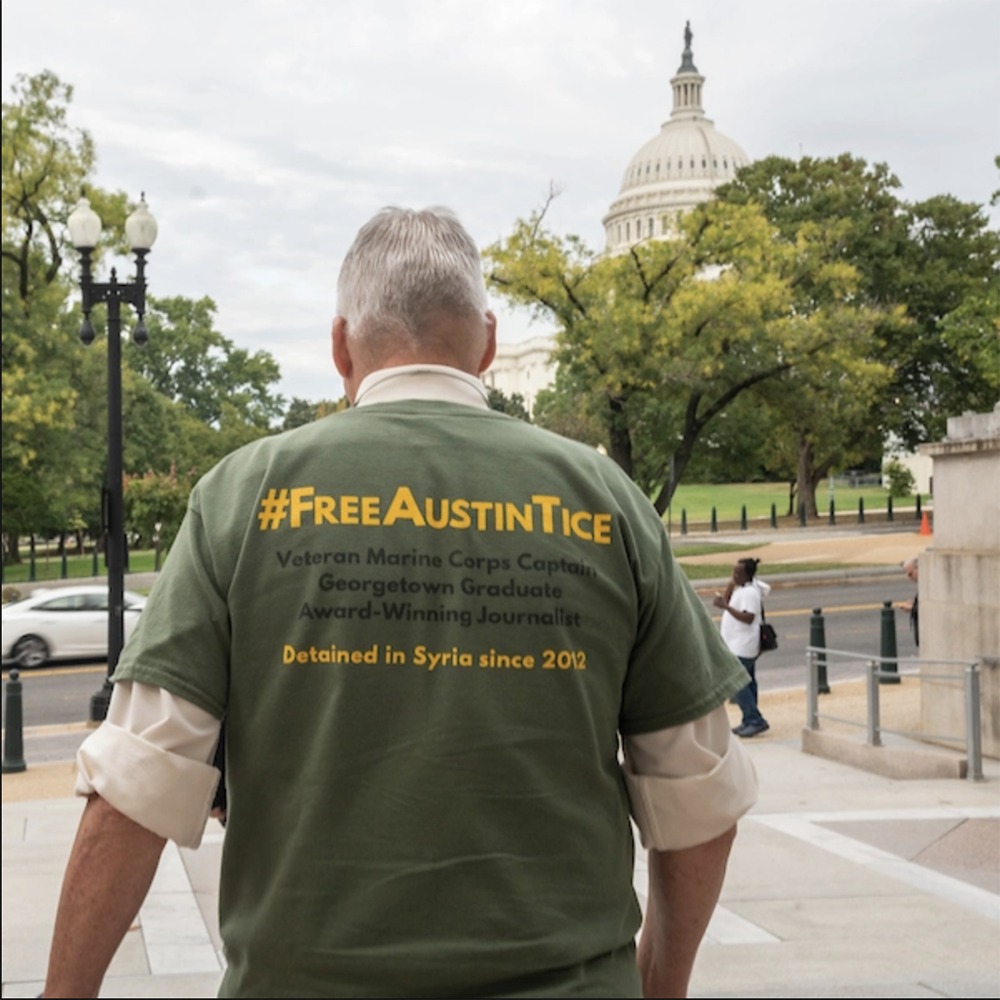 Family members and supporters of Austin Tice (SFS ’02) led an advocacy campaign at the U.S. Capitol on Sept. 23 as a part of the new “Ask About Austin Tice” campaign launched this August.

After completing his second year at Georgetown University Law Center, Tice was kidnapped in Syria in 2012 while traveling in the country to report on the escalating civil war between the Syrian government and rebel forces.

Tice is believed to be a captive of an affiliate of the Syrian government. Five weeks after he was scheduled to return home, a video posted online titled “Austin Tice is Alive” showed Tice alive and surrounded by unidentified armed men, according to The Family of Austin Tice website. Tice is the only American journalist currently being held overseas, according to the National Press Club Journalism Institute, an international free press advocacy organization.

Increased public awareness of Tice’s situation would help encourage members of Congress to take action to secure Tice’s safe release and return, according to Julie Moos, executive director of the NPCJI.

“When our elected representatives know that their communities care, it’s even more impactful,” Moos wrote in an email to The Hoya. “I hope every American will Ask About Austin until he’s safely home.”

The “Ask About Austin Tice” campaign was launched this past August on the seven-year anniversary of Tice’s disappearance. Last Monday, campaign volunteers visited every congressional office on Capitol Hill to ensure that members of the U.S. House of Representatives and U.S. Senate are aware of Tice’s situation, according to the NPCJI website.

Dean of the School of Foreign Service Joel Hellman encouraged students to attend the campaign visit to the Capitol and reiterated Georgetown University’s support of Tice and his family in a Sept. 19 email to SFS students.

The university remains hopeful that Tice will return to Georgetown, Hellman wrote.

“Over the last seven years, Georgetown has stood with Austin’s family pressing for his release and return. Those efforts continue,” Hellman wrote. “We look forward to welcoming Austin back for his final year at Georgetown Law and celebrating his commitment to raising the world’s awareness of the human costs of war in the true spirit of SFS and Georgetown.”

The #FreeAustinTice movement gained significant traction on Georgetown’s campus in recent years. In 2015, the movement featured a social media challenge for individuals to post pictures of themselves wearing blindfolds stating “Free Austin Tice” and challenging others to post the same message.

In 2016, students and individuals associated with Reporters Without Borders, an international nonprofit organization that aims to protect journalists and that has been working with Tice’s family since September 2012, gathered outside the White House and walked around holding signs and wearing blindfolds that said “Free Austin Tice.”

Ann Oldenburg, assistant director of the journalism program at Georgetown, reiterated the need to continue to advocate and spread awareness of Tice and his situation.

“Every day that goes by without Austin coming home is heartbreaking.” Oldenburg wrote in an email to The Hoya, “It’s important that we all remain vigilant in helping the Tice family to maintain the awareness and importance of ensuring his safe return.”

Negotiations for Tice’s release reportedly took place in 2015 with an American diplomat, a Czech diplomat and the Syrian Deputy Foreign Minister in Damascus, Syria. However, State Department officials did not release information surrounding the negotiations at the time.

The Reporters Without Borders North America Bureau, a partner in the Ask About Austin campaign, was present at the Sept. 23 visit to the Capitol.

Tice’s situation is representative of how risky international journalism can be in today’s world, according to Dokhi Fassihian, the executive director of Reporters Without Borders North America Bureau.

“This is a dangerous time to be a journalist, both in the United States and abroad,” Fassihian wrote in an email to The Hoya. “Our organization is more committed than ever before to ensure journalists can work safely and independently, and that those who attempt to silence them are held to account.”

This article has been updated with photo credit to Melissa Lyttle.