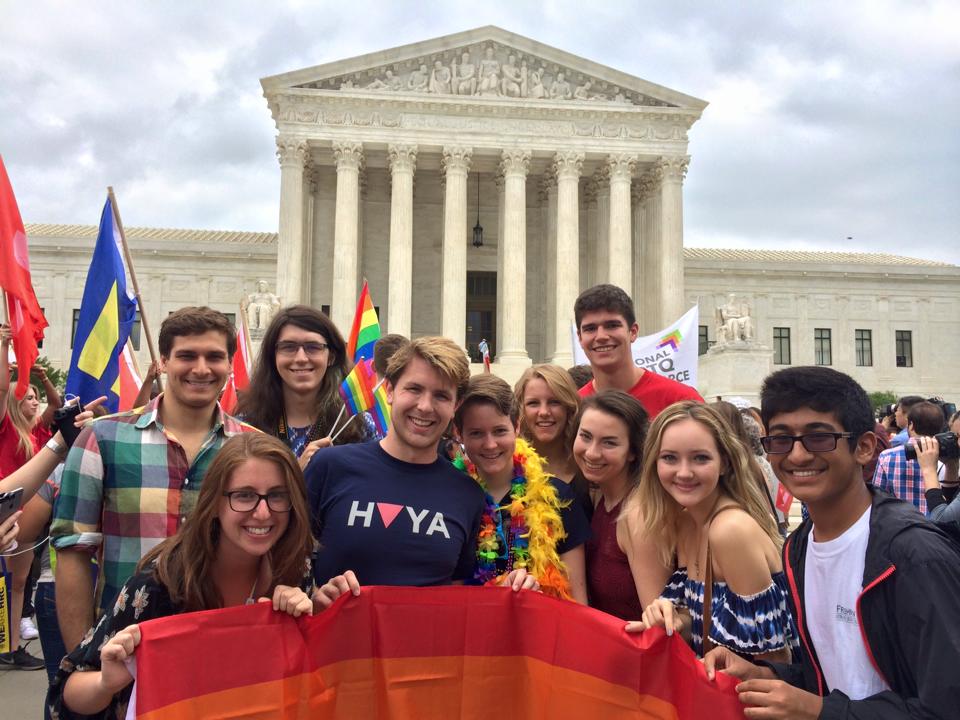 The Supreme Court legalized same-sex marriage nationwide this morning in a 5-4 ruling.

Thousands of supporters, including Georgetown students, celebrated the ruling outside the Supreme Court for hours after the decision was announced at around 10 a.m.

“It would misunderstand these men and women to say they disrespect the idea of marriage. Their plea is that they do respect it, respect it so deeply that they seek to find its fulfillment for themselves,” Kenney wrote, referencing same-sex couples seeking the right to marry. “Their hope is not to be condemned to live in loneliness, excluded from one of civilization’s oldest institutions. They ask for equal dignity in the eyes of the law. The Constitution grants them that right.”

The court’s ruling officially legalized same-sex marriage in all 50 states, including the remaining 13 states that had not yet done so.

President Barack Obama addressed the nation around 11:15 a.m. and praised the Supreme Court for its decision.

“All people should be treated equally, regardless of who they are or who they love,” Obama said. “This ruling is a victory for America.”

Today is a big step in our march toward equality. Gay and lesbian couples now have the right to marry, just like anyone else. #LoveWins

The four dissenting justices presented individual opposing arguments. Chief Justice John G. Roberts maintained that the case regarding same-sex marriages should have been left for the states to decide.

“Whether same-sex marriage is a good idea should be of no concern to us. Under the Constitution, judges have power to say what the law is, not what it should be,” Roberts wrote.

Several Georgetown students were among those celebrating outside the Supreme Court, including GU Pride President Campbell James (SFS ’17).

“We all need to celebrate that queer couples can now share all the benefits and status that marriage bestows, and we should all appreciate the work of those who have fought so hard for this victory,” James said. “The community has such visibility and momentum that I cannot wait to see what fight is next and how the public and the government will help fight institutional oppression for all gender and sexual minorities.”

Noah Nelson (COL ’18) was also in attendance and described the atmosphere of the crowd after the ruling.

“Standing on the steps of the Court today, I felt goosebumps. I felt so honored to share an important victory with the couples impacted by today’s decision,” Nelson said. “Everyone celebrating as a unified front, in support of a fundamental human right, really made me proud of how far our nation has come.”