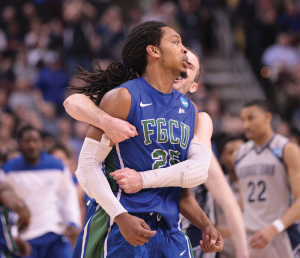 It may have been filled with its own share of exciting victories — included two over a Final Four team (Syracuse) and one over the eventual national champion (Louisville) — but the 2012-13 men’s basketball season will above all be remembered for Georgetown’s humiliation at the hands of Florida Gulf Coast in the first round of the NCAA tournament.

Carrying a rebuilt roster that featured zero seniors after the early departure of standout Hollis Thompson, Georgetown began the season with a rare no-contest, when their opener — against Florida aboard the USS Bataan — was cancelled due to bad weather.

Even after two wins in the District and a victory over then-No. 11 UCLA in the Legends Classic semifinals, Georgetown was not expected to compete against then-No. 1 Indiana in the next day’s championship in Brooklyn. As fate would have it, the Hoyas instead burst onto the national scene when junior guard Markel Starks and sophomore forward Otto Porter Jr. helped force overtime against the Hoosiers before ultimately falling 82-72.

Questions about Georgetown’s offense would soon be raised, however, after it put up just 37 points against Tennessee, 46 against lowly Towson, 48 points in a loss at Marquette and 45 in a Pittsburgh blowout at Verizon.

The Hoyas got even worse news in the days that followed, as sophomore forward Greg Whittington — who had been averaging 12.1 points and seven rebounds — was suspended for the remainder of the season due to academic issues.

But amid the adversity, Thompson III executed a masterful turnaround keyed by an astonishing run of success by Porter Jr., a resurrection that secured both coach and star their respective Big East year-end awards.

The Hoyas were undefeated in February, with Porter Jr. electrifying the Carrier Dome in the final away game of the Big East’s greatest rivalry and then doing it again in a 79-78 overtime grinder of a winover the Connecticut Huskies.

The best part of the show was still to come. Thoroughly dismantling Syracuse in every facet of the March 9 game, Georgetown — in the words of former Head Coach John Thompson Jr. — had seemingly “kissed Syracuse goodbye.” The victory was made sweeter by the fact that with it came a Big East regular season title and the No. 1 seed in the Big East tournament.

But the postseason, as has been the case every year since Georgetown reached the Final Four in 2007, was filled with disappointment, as Syracuse triumphed in overtime in the teams’ third meeting at Madison Square Garden.

Nonetheless, the Hoyas were assigned a No. 2 seed and sent to Philadelphia. But the legions of fans that made the short trip up I-95 were in for a head-scratcher.

In a shocking 78-68 upset, lackluster offense and nonexistent defense allowed Florida Gulf Coast to turn the City of Brotherly Love into Dunk City, exposing the vulnerabilities of heavily favored Georgetown. And so, for another year, Thompson III — honored just a week before as conference coach of the year — was left shaking his head.

“Trust me, more than anyone on this earth, I’ve tried to analyze it, think about it, look at what we could do, should do differently,” Thompson III said. “And I don’t know.”