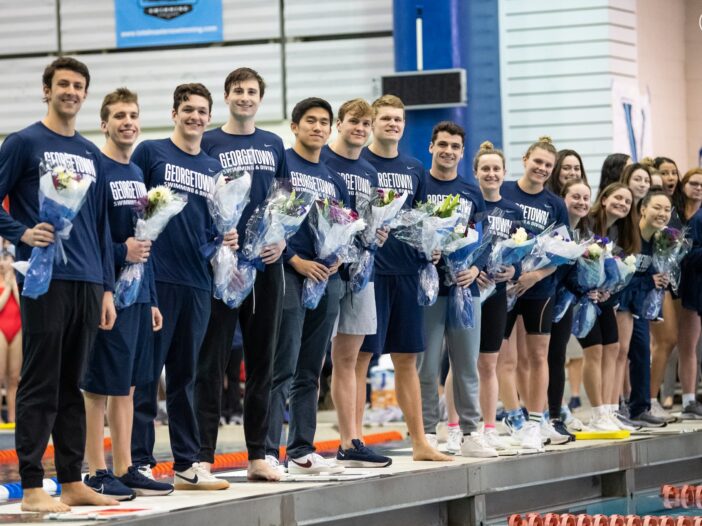 The 2021-2022 season for Georgetown was a historic one. The Hoyas won six of their eight meets, with their most impressive performances being a 222-78 win against UConn and a 199-94 win against Fordham University.

Georgetown also placed an impressive second in the Terrier Invitational at Boston University at the season’s midway mark.

Nevertheless, Georgetown was not the favorite going into the Big East Championships. The Xavier Musketeers stormed into the tournament seeking a fourth straight conference championship and a seventh total championship in the school’s history, making them a daunting opponent for the Hoyas.

Although the Musketeers scuffled in the regular season, they found their groove during the conference championship and led the Hoyas by 9.5 points going into the final day. However, Xavier fell behind as Georgetown racked up four gold medals and one silver medal on the day, giving the Hoyas a 794-784.5 advantage when the dust — or waves, rather — settled.

The swimming coaching staff, led by Head Coach Jack Leavitt, earned the Men’s Swimming Coaching Staff of the Year. Head Coach Mike Tober was a co-winner of the Men’s Diving Coach of the Year.

Following the meet, Leavitt spoke to Georgetown Athletics about the contributions of his athletes and the significance of the win, especially when considering how the odds were not in the Hoyas’ favor.

“Our guys stepped up in a huge way and I think the only people in the pool who thought we could do this was us,” said Leavitt. “We’re super proud of them and we get to bring home our first title in program history.”

Hoya swimmers and divers set many school records throughout the season, but no one could compare to junior Michael Baldini at the Big East championship. He edged Xavier’s Christian Thomas by .12 seconds in the 100-yard free to win gold with a time of 44.68 seconds.

Though he shattered school records with every stroke, Baldini’s most significant race was actually the 400-yard free relay. With a time of 2:59.12, Baldini, Carbone, Devlin and senior Jack Muratori earned a silver medal, placing Georgetown ahead of Xavier and clinching the championship for the Hoyas.

Georgetown swimmers gave everything they had during the competition: 19 Hoyas across the men’s and women’s programs earned All-Big East team honors. Of the 13 Hoya men receiving these awards, Baldini and Carbone notched seven each.

On the diving side, first-year Charlie Reichle picked up a big win for Georgetown in the 3 meter dive. His score of 582.05 points won him first place, giving the Hoyas a crucial 20-point boost in the final day of the championship.

Altogether, Georgetown’s men’s swimming and diving team picked up a conference-leading eight gold medals, tied for the conference lead in silver medals with five and tacked on three bronze medals for good measure.

As only seven members of the team are seniors or graduate students, there won’t be much turnover for next season. Although star swimmer Carbone will graduate this spring, look for Baldini, as well as the younger cohort of swimmers, who will be tasked with maintaining the program’s newfound success next season.