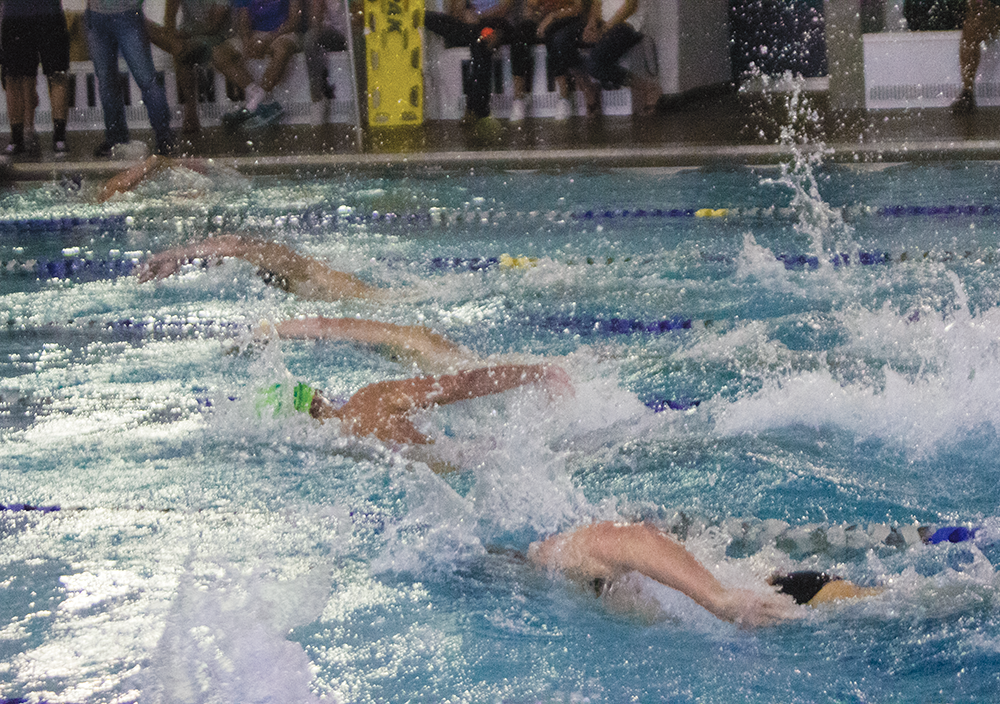 Georgetown swimming and diving will kick off its competitive season this weekend. The Hoyas will travel to Delaware for their first dual meet of the season. The meet is a chance to show off some early-season conditioning and training: it is also an opportunity for the large class of promising freshmen to get their feet wet.

Fourteen women and 10 men recruits have swelled the ranks of the Blue and Gray this offseason, increasing the overall roster size significantly, as few athletes were lost to graduation last spring. The group brings with them a promising level of talent.

“That’s why the freshman class is so big,” women’s senior co-captain Casey Bandman said. “There were so many talented members looking to swim here that [Head Coach] Jaime [Holder] said ‘Yeah we’ve got to take all these girls on’ — at least I can speak to the girls’ side.”

The freshmen will look to contribute in more ways than providing depth, as they compete at the top level in several early-season events, bolstering a team that was already coming off of a solid second place finish in the Big East last year.

“Its not something that we’ve had a lot of in the past — not only depth, but some of these freshmen will be top performers for us,” Holder said. “It adds a lot of elements to us and gives a lot of flexibility to our lineups.”

The freshmen will be competing across a broad breadth of events, including diving. The newcomers have impressed the upperclassmen in the first month of practice.

“We have probably our best class of freshmen ever, so it’s going to be fun to see how they race competitively,” men’s senior co-captain Jamie Gallagher said. “I’m sure they’re going to do a great job, score us a lot of points, so I think everyone’s really excited for the freshmen.”

In addition to the emerging quality that the freshmen are providing, the veteran base is also looking to come back strong. Although races at full speed have not begun this early in the season, the upperclassmen are optimistic with their progress in conditioning.

“For the next few weeks we are really just looking to get our racing feel back,” Bandman said. “These meets aren’t going to matter as much just because they’re so far removed from the championship season, but they’re a great opportunity to get back in racing mode and get up on the blocks and go fast.”

Events this weekend will provide a chance to display how prepared the Hoyas are at this stage in the season. The low-key Potomac Diving Relays today at 5 p.m. provide a chance for the entire team to compete, as only segments of the team travel to competitive meets. Diving will take place at Georgetown’s McCarthy Pool, while swimming events will be held at American University.

Holder said that given all of the new faces on the roster, all-squad meets are important for the team to get more comfortable with each other.

“Right now we’re just trying to get everyone in shape and on the same page because people have come in with different levels of fitness and all that stuff, so that’s just where we’re at,” Holder said. “But we’re starting to get a little more specific, and as we get more into our dual meet season, we’ll get more information as to where everybody is.”

After that event, the team now turns its focus to the first meaningful events of the season, starting the process leading up to the Big East Championship meets in February 2015. For Holder, that means getting to know the team for Holder.

Bandman is confident in the team’s preparation for the important meets down the road.

“I think that we’re still getting in shape, getting back to where we need to be but I know we’ll be there for the big meets,” Bandman said.

For Gallagher, the high talent level on the team results in an elevated level of expectations.

“Expectations are as high as they’ve ever been,” Gallagher said. “I think this is the best team we’ve had in the four years I’ve been here.”

For a team that finished second in the conference last year, the Big East Championship remains the top goal.

“No one ever sets the goal to be second again,” Gallagher said.