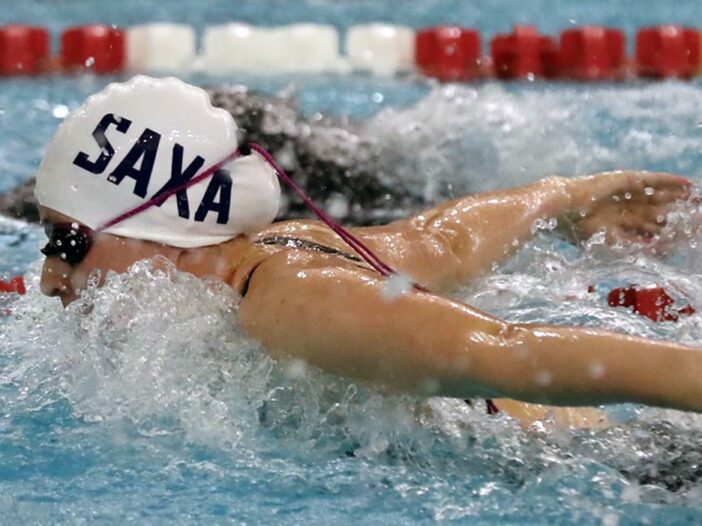 The Georgetown men’s and women’s swimming teams were both defeated by the George Washington University Colonials on Saturday, Jan. 22, marking the first time this season that an opposing team has handed both units losses.

The Colonials traveled across town from Foggy Bottom to Albert G. McCarthy, Jr. Pool for their first contest of 2022, meeting a pair of Hoya squads that had hosted the Blue Jays of Johns Hopkins University the day before. The Colonials returned home with a narrow 159-141 victory over the Hoya men and a 165-127 triumph in the women’s competition.

George Washington got off to a quick start with first-place finishes in the afternoon’s opening two events, the men’s and women’s 200-yard medley relay. Although the Georgetown women’s lineup of senior Grace Chen, sophomore Erin Hood, first-year Genevieve Youngman, and sophomore Isabella Wylie perfectly replicated their winning time of 1:46.45 from the previous day’s meet, the Colonials bested them by 0.07 seconds to secure 11 points for their side.

The Hoyas would not have to wait long for their first victory, however. As his teammates’ cheers echoed through the aquatic complex, Georgetown senior Michael Wheeler clinched the 1,000 freestyle with a 9:35.47 finish, outpacing the closest Colonial by 1.85 seconds. Wheeler also went on to earn 4th place in the 500 freestyle with a time of 4:46.24.

On the women’s side, Hood collected wins in the 100 breaststroke and the 200 individual medley to match her victories in the same two events the previous day against Johns Hopkins. She also came in second-place in the 200 breaststroke, finishing with a team-best of three top-two solo results on the day.

Sophomore Kyle Maziarz produced scores of 287.93 on the one meter dive and 329.55 on the three meter to claim the top spot for Georgetown in both contests on the diving board. Maziarz’s performance marked just the second time this season that a Hoya diver notched multiple victories at the same meet.

First-year Connor Rodgers led the George Washington men, amassing 27 points for the Colonials with triumphs in the 200 butterfly and 200 and 500 freestyles. Junior Durde Matic maintained his excellence in the 100 butterfly, winning by 2.73 seconds one month removed from setting a pool record in the event in a meet against the Naval Academy. The women’s team succeeded on the strength of a collaborative effort, with five different Colonial swimmers recording multiple victories.

After beginning the season 5-0, the last two outings of the Georgetown men’s team have produced their first pair of consecutive losses since early 2020. With their defeat, the women’s side fell back below the .500 mark to 3-4 on the year.

Nevertheless, Head Coach Jack Leavitt was confident about his teams’ level of focus with the Big East Championships approaching at the end of February.

“It’s been mental training as much as physical,” he told The Hoya in an interview after the meet. “Both the men’s and the women’s teams have been really dialed in since we started in September.”

Georgetown’s competitive spirit and mental toughness was on full display in the meet’s final event. The Hoya women took the top two places in the 400 freestyle relay, with first-year Lily Gremmels, first-year Tia Thomas, Wylie and Chen recording the eleventh and final first-place finish for Georgetown with a time of 3:39.05. In the equivalent men’s race, Hoya squads finished in second and third.

Saturday’s meet also gave a glimpse of Georgetown’s promising future with 10 different first-years – six from the men’s team and four from the women’s – reaching the podium.

The Hoyas take to McCarthy Pool for the last time this season next Saturday, Jan. 29, for a Senior’s Day showdown against familiar Big East foe Seton Hall.