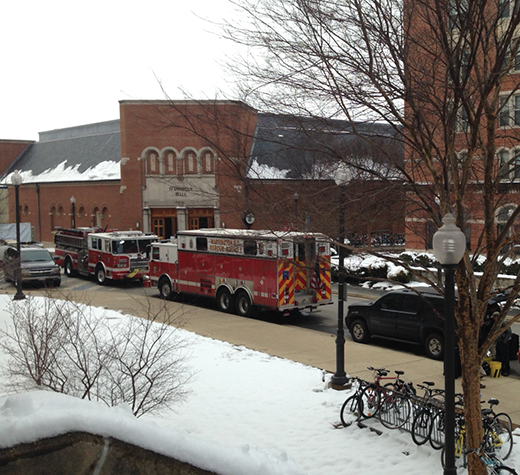 In the wake of Tuesday’s revelation that a substance found on the sixth floor of McCarthy Hall had tested positive for the potentially lethal poison ricin, students affected by the investigation have expressed frustration with the university’s inconsistent communication and its dissemination of information during the event and subsequent investigation.

According to university spokesperson and Assistant Vice President for Communications Stacy Kerr, the Georgetown University Police Department responded to reports of a potentially hazardous substance in McCarthy Hall around 4 a.m. Tuesday. GUPD then alerted the Metropolitan Police Department and D.C. Fire/EMS who brought in hazardous materials teams. They were subsequently joined by officers from the Federal Bureau of Investigation’s Joint Terrorism Task Force.

According to D.C. Fire/EMS spokesman Timothy Wilson, the squad that responded to the incident worked effectively with the other law enforcement on the scene.

“When we work between local and federal jurisdictions we both have similar protocols in how things are coordinated and carried out. It was a seamless process to work with D.C. police and the FBI in terms of the investigation,” Wilson said.

In the meantime, university administrators and officials convened to discuss the developing situation.

At 9:38 a.m., GUPD Chief of Police Jay Gruber sent an email to the university community as well as students’ parents apprising them of the situation, including information that initial field tests had registered negative for hazardous substances.

In order to give law enforcement full access to the area surrounding where the ricin was discovered, residents of the sixth floor of McCarthy were informed at 11 a.m. that the floor would be temporarily closed via an email from the Office of Residential Living.

“Law enforcement had already assured us that we didn’t need to evacuate the building. However, to ensure that investigators had access to all areas, they closed the sixth floor,” Kerr said.

McCarthy 6 resident Margie Fuchs (COL ’16), former deputy editor for The Guide, said she did not receive further updates from the university or ORL throughout the day after initially being told to stay off the floor.

“Throughout the day, all the information I received regarding this incident was either through people posting on Facebook or other D.C. news outlets,” Fuchs said. “And I just find it very concerning that I literally live on this floor and was given no information about it.”

When lab results for the field tests had not yet been returned by late afternoon Tuesday, university officials made the determination to keep the area cordoned off while the investigation remained ongoing. Twenty students living in the area of the floor under investigation were offered temporary housing at the Savoy Hotel, on 2505 Wisconsin Ave. NW, because the Leavey Hotel and Conference Center was full.

Affected students, however, were unable to return to their rooms to retrieve clothing, books or toiletries they might have needed for the night, though each displaced student was given a $20 credit to his or her GOCard for toiletries and food. Daye Shim Lee (SFS ’14) was one of the students temporarily housed off campus for the night.

“They didn’t let us back in for any legitimate necessity, and we were basically told to sleep at the Savoy Hotel; that’s all the way over on Wisconsin Avenue,” Lee said. “The hotel was only provided for the night though, so those of us who didn’t have class until like 3 p.m. didn’t have any access to any kind of shelter until then, and it was just overall really frustrating.”

While students living in the cordoned-off area were informed of the situation via email, the remainder of the sixth floor residents, including residential staff, remained in the dark with respect to updates apart from an email send by Executive Director of Residential Services Patrick Killilee to McCarthy Hall residents at 6:52 p.m.

“Our RA lives on the other side of the hall; she knew less than I and my roommate did. Only the people who were evacuated got any remotely specific emails,” said sixth-floor resident Emily Min (NHS ’16). “Even the rest of the floor knew very little info so I just felt like the flow of information wasn’t effective from the university. I get they were trying to downplay it so as not to cause a panic, but I feel like the order of things they told us was out of order.”

Fuchs was similarly frustrated by the varying levels of information disseminated by university officials to those with rooms in the cordoned-off area and the rest of the sixth floor.

“I think the university acted smartly in that it was a developing situation and they were working within the bounds of what they knew at the time. I just think that more information really would have been helpful for those of us who live on this floor,” Fuchs said.

“The results we got on Tuesday were field tests that were performed on site. The substance that was sent to the laboratory tested positive for ricin. All the field tests had come back negative, but it’s protocol that no matter the results of the field tests it all goes to the lab for further testing,” FBI spokeswoman Jacqueline McGuire said.

Ricin, a poison produced from the waste of castor beans, has been experimented with as a chemical warfare agent by the U.S. military as well as international terrorist organizations. According to the Center for Disease Control, exposure to the agent can occur through inhalation, ingestion or skin exposure, and it damages cells by preventing them from producing necessary proteins.

According to McGuire, while the bureau frequently encounters cases involving hazardous materials, this is only the second time in recent history that the D.C. FBI has come upon samples testing positive for ricin.

“We had a case in June 2013 of someone sending ricin, and she sent it to a few places up here, but that’s the last time we’ve had a positive result for ricin in the District. Our Hazardous Materials team responds on a regular basis to a report of suspicious substance. Most often, they’re white powder letters,” McGuire said, referring to a form of scare-letter modeled after the anthrax letters to politicians in the wake of 9/11.

At 3:20 p.m. Wednesday, sixth-floor residents were informed that field tests for the biohazard had come back negative and that they would be able to return to their rooms. The rest of the Georgetown community was informed in a campus-wide email sent by Gruber at 5:20 p.m.

“They were informed that they could return to McCarthy Hall prior to the notification that went to the whole community that the tests were negative,” Kerr said. “We were very mindful of letting students back in as soon as possible.”

Welles Robinson (COL ’14) was a resident of the cluster where the drug lab was found.

“They woke everyone up and the entire building had to go to the Leavey Center,” Robinson said. “They wouldn’t let us back into Harbin for a while, like 10 p.m., I think.”

Unlike the situation in McCarthy, all of Harbin Hall was immediately evacuated as the presence of a DMT lab provided an immediate danger to residents’ health and safety.

While the university has a set of protocols that it follows in such situations, Kerr did not see a connection between the university’s handling of the ricin and DMT situations.

“It was different timing, different circumstances, with different teams in place responding. We feel very comfortable that we took the appropriate steps this week, keeping the safety and health of our students as our top concern,” Kerr wrote in an email.