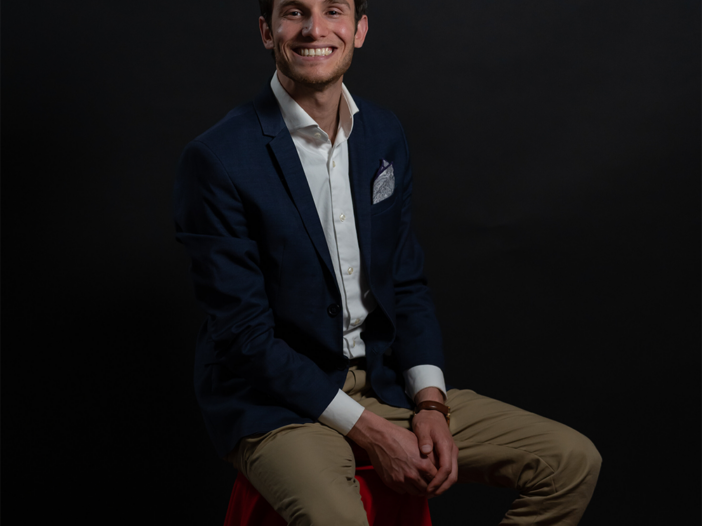 Omar Alshogre (GRD ’24) was driving through the mountains of Norway when he received an email notifying him he was accepted to Georgetown University just nine days after applying. Because he had never received an admission letter before, he had to Google what the letter was supposed to look like before believing the email.

Stopping the car, a friend captured Alshogre’s elation in a video that has been viewed over 179,000 times on Twitter since it was posted Nov. 1.

Alshogre’s acceptance to the university comes after harsh treatment from the Syrian regime headed by dictator Bashar al-Assad. When the Syrian Revolution began in 2011, Alshogre, then 15 years old, attended his first pro-democracy protest, where he was also arrested.

Though he had gone to that first protest to prove himself to his father, a retired military officer, his subsequent imprisonment for two nights changed their relationship, Alshogre said in a Zoom interview with The Hoya.

“When I made it out of prison, I went to my father to tell him that I survived that. I am strong, right, look what they did to me and I still I survived,” Alshogre said. “At that time, my father changed. My father became a different person because he realized that we may die or he may die in this war.”

What began as a set of nationwide demonstrations for government reform quickly morphed into the vicious Syrian civil war that has claimed the lives of at least 400,000 people. Many dissidents and rebel fighters arrested or captured by the Assad regime have been detained in the government’s elaborate prison system, which is notorious for its poor conditions and the systemic torturing of detainees.

Although he still wanted to prove himself after experiencing prison, Alshogre said his activism quickly became about ending the brutal treatment Assad was subjecting his people to.

“I just wanted to prove to my father I’m not a kid, but then, when they detained me for the first time then released me, I understood what freedom meant for the first time because they took all of that me,” Alshogre said. “So when I got out of prison, I demonstrated to be free.”

When Alshogre was detained for the last time at 17, he spent three years between the Saydnaya Prison, known as the “human slaughterhouse,” and Branch 215, a political prison in Damascus, according to Alshogre.

Weighing only 75 pounds, Alshogre was smuggled out from prison in 2015 for $20,000, a price his mother paid to a judge and a prison officer. The officer and judge staged a mock execution to sneak Alshogre out of the prison.

Unaware of this deal, Alshogre was carried out of the Saydnaya prison blindfolded. Waking up alone and covered in blood, Alshogre saw sunlight for the first time in three years. Eventually, he would learn another prisoner had been executed in his place.

He snuck away to Turkey to recover before seeking refuge in Sweden.

After completing high school in Sweden, Alshogre started to speak publicly about his story. Gaining an audience, Alshogre was offered a job with the Boston Consulting Group, a global consulting company, to speak across Sweden about trauma as a driving force of leadership. Through his various consulting projects, Alshogre was able to travel and share his story on his own time.

Alshogre traveled to the United States for the first time in 2018 to speak at Brown University about his experiences. The same year, he became involved with the Syrian Emergency Task Force, an organization that supports Syrian citizens in their fight for democracy.

With the SETF, where he currently serves as the director of detainee affairs, Alshogre has advocated for the Caesar Syria Civilian Protection Act, a bill signed into law in 2019 that authorizes sanctions on the Syrian government for its human rights abuses. The bill is named for a Syrian photographer who shared images of torture perpetrated by the Assad regime.

In March, alongside other advocates for the Caesar Act, Alshogre testified before the U.S. Senate Committee on Foreign Relations about the passage of this bill and his experiences while detained in Syria. Though it was intimidating to speak in front of the Senate, Alshogre felt like he had a responsibility to share his story.

“I was afraid to be there but, as well, I said, ‘If I don’t do it, and everybody gets scared, and in the end the regime will win the war, and nobody will get what they want,’” Alshogre said. “If somebody will stand in front and be the face for that, it should be me because I am firstly a public speaker. So I have the way of telling the stories.”

Since Alshogre’s Georgetown acceptance video surfaced, a surprising number of Georgetown students, faculty and graduates have reached out asking to meet him, according to Alshogre.

“Once you’re accepted into Georgetown, you also become part of this family and this community of people that are ready to help you,” Ruben said in a video interview with The Hoya. “The only thing that unites you is that you go to the same school, but that’s enough for someone to say, ‘I want to help you, you’re a fellow Hoya. Let’s see how I can be helpful.’”

Alshogre decided to apply to Georgetown because he would be closer to policymakers and could combine his interests in business and international affairs with his ideas for a more just future in Syria. He will be pursuing a bachelor’s degree in the School of Continuing Studies, whose campus is located several blocks from the Capitol.

“I believe I can be part of rebuilding Syria,” Alshogre said. “I have this idea in my head that I am tired of seeing politicians and human rights activists being the only parts working to solve the conflict and the war in the world. And we have a lot of brilliant minds, a lot of businesses, that bring a lot of smart people, but those smart people never had the chance to think of solving the conflicts in war zones.”

This article was corrected Nov. 20 to correct details about Alshogre’s relationship with BCG, clarify details about his travels to the United States, and add information about the degree he is pursuing.