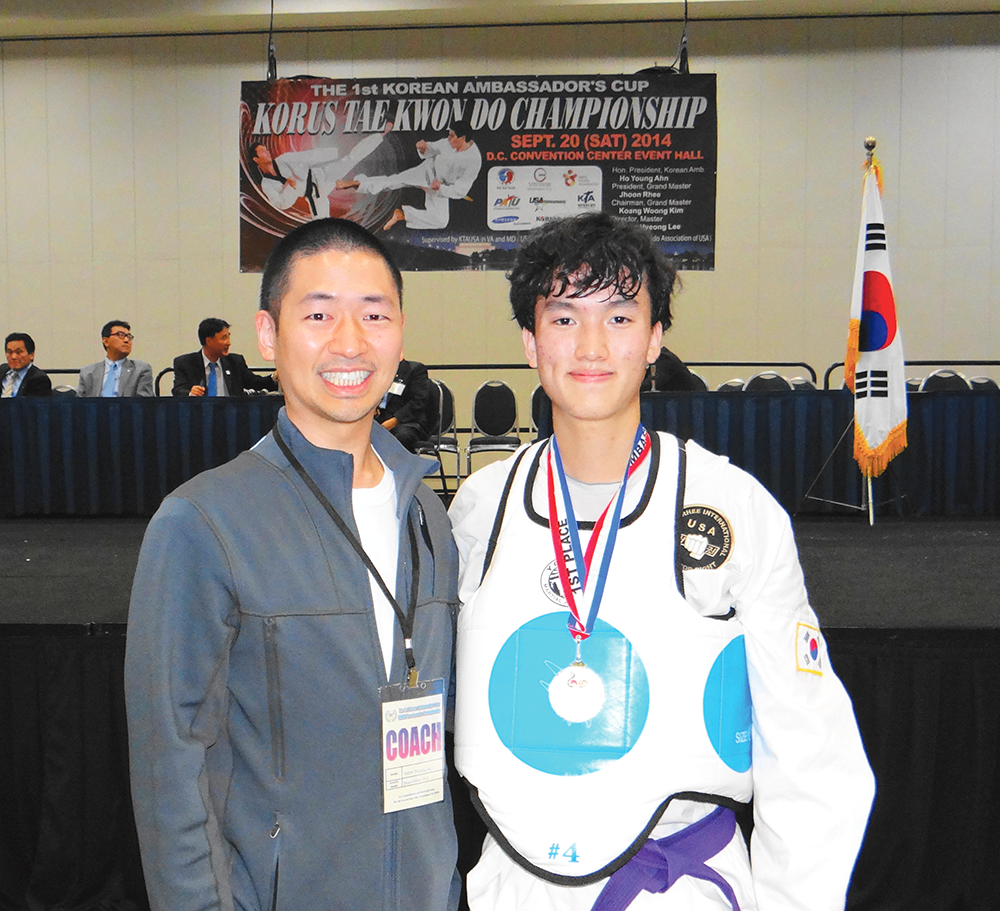 Kim, president of the Georgetown Tae Kwon Do Club, participated in the first major competition of his career at the adult level.

Kim competed in the intermediate men’s 18-32 lightweight elite sparring division. Competitors are divided by age, rank and then weight. The national competition drew over 700 competitors from around the country, according to Lee, but Kim only faced one other competitor within his division, the elite level.

The two sparred in a closely competitive match late in the day, after the large numbers of lower-level competitors had completed their sparring and other festivities had run their course.

“What is amazing is that we got there around 11 [a.m.] and the sparring was so popular [that] it took hours and hours, by the time we started competing it was like 6 [p.m.],” Lee said.

Elite sparring matches take the form of two 90-second rounds with a 10-second break in between. Points are awarded for contact made on the body with punches and kicks. The elite level is distinguished from the open level by the allowance of head contact for additional points.

Kim was immediately tested in the first 90-second session, and in fact went into the 10-second break trailing 5-3. His 26-year-old opponent increased the lead in the second round, as Kim dropped further behind by the score of 7-4.

“Both of them were very well-matched because they were about the same height, of course they’re in the same weight class,” Lee said. “[With] 43 seconds left I distinctly remember he was down 4-7 and all of a sudden he just switched it on.”

Kim scored six points in a row to earn a 10-7 win, taking the gold medal in the event. The win was a first not only for Kim but for the club, which had never before sent students to Olympic-style tae kwon do tournaments.

“I just tried to keep calm, I really went for the experience,” Kim said. “It wasn’t do or die necessarily so I definitely just kept plugging away … just kept working it, didn’t give up, and I think it was a great experience to build on in the future.”

The event, held by the Embassy of the Republic of Korea and sponsored by USA Tae Kwon Do, showcased the unique story of the sport in the United States, its growing influence and its growing accessibility.

Grandmaster Jhoon Rhee, under whose tutelage system Lee and all Georgetown instructors trained, presided over the competition. Rhee is widely thought of as father of martial arts in America, bringing the discipline to the United States in the 1950s from its roots in South Korea.

“[Rhee] suggested [that we go] and Daniel was very eager to compete,” Lee said.

The D.C. Convention Center venue allowed for large crowds of spectators — for whom admission was free — to observe the sporting and cultural aspects of the event, which both Kim and Lee hope others will find engaging, and will open more eyes to the beauty of the discipline.

“I think it’s very exciting, usually there aren’t that many tournaments around the area,” Lee said.

Both Kim and Lee expressed hope and a certain amount of expectation that the event would continue, providing continued opportunities for the sport and, specifically, the tae kwon do organization at Georgetown.

“It was intimidating, but it was a great experience,” Kim said. “I really hope to be more involved in the future.”