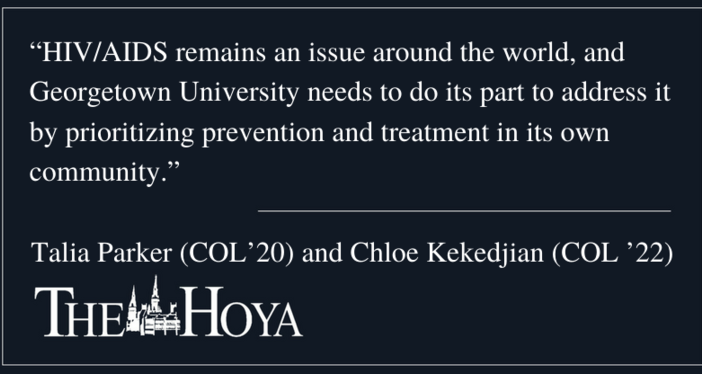 On Dec. 1, we commemorate World AIDS Day. As of 2018, approximately 38 million people around the world are living with HIV. 770,000 people died of AIDS-related illnesses in 2018 alone, bringing the total AIDS-related deaths since the start of the epidemic to a staggering 32 million people. Treatment access has increased but is still not comprehensive; in 2018, 62% of people living with HIV were receiving antiretroviral treatment.

It is important to acknowledge that certain populations are more affected by the HIV pandemic than others. Especially at risk are men who have sex with men, people who use intravenous drugs, incarcerated people, sex workers and transgender people. Other populations such as young women in Southern and Eastern Africa are also at increased risk of being affected by HIV/AIDS.

The continuing HIV/AIDS epidemic hits close to home, too. As of 2016, there are nearly 15,000 people in Washington, D.C., living with HIV, and the rate of new HIV diagnoses in D.C. was the highest of any city in the country in 2017.

Clearly, HIV/AIDS remains a serious issue around the world. Yet current foreign policy and student health resources on Georgetown University’s campus fail to address this pandemic. Members of the Georgetown community should take a stand against harmful foreign policy that affects global response efforts toward HIV/AIDS. Moreover, Georgetown must take action to facilitate HIV prevention and treatment by offering free HIV/STI screening programs on campus.

U.S. foreign policy under the Trump administration, rather than using its significant international influence to make strides in global HIV prevention and treatment, has actively harmed these efforts. The Mexico City Policy, more commonly known as the Global Gag Rule, prevents clinics that receive U.S. government funding from advocating or offering information about abortion even with their own money, regardless of the laws of the country the clinic operates in. Since many clinics that offer abortion services also provide HIV screenings and testing, this policy directly affects HIV care. Clinics are required to choose between providing comprehensive information and health care services that their local communities need and losing U.S. funding.

The Global Gag Rule has led to less effective care and the defunding of programs and clinics in areas where HIV/AIDS is most prevalent. For example, a clinic in the Gaza Province of Mozambique, where about a quarter of the population is HIV positive, lost its U.S. funding as a result of this policy. Subsequently, over a three-month period, the number of people this clinic screened for HIV dropped from 5,981 to 671. The situation in Gaza Province is just one example of how catastrophic the Global Gag Rule has been to HIV prevention and treatment in communities around the world.

Furthermore, in light of the continuing threat of HIV/AIDS around the world and in our own backyard, one would hope Georgetown would promote the health and safety of its students by prioritizing free HIV and STI testing on campus. However, that is not the case.

Last year, the Student Health Center hosted free HIV/STI screenings one Thursday morning each month, but the early timing made it inaccessible to many students who work or have class during the day. However, this service has been discontinued this semester. The recent discontinuation of free monthly HIV/STI screenings is a discouraging step backward. While there is a free HIV screening planned for Dec. 2 from 6 p.m. to 8 p.m. in honor of World AIDS Day, the event is not comprehensive of all STIs and, as a one-time event, is not institutionalized.

In an ideal world, students would be able to walk into the Student Health Center at any time and obtain free and confidential HIV and comprehensive STI screening, allowing students to know their status at a critical time in the pandemic. We recognize that this is a big ask and would require a major financial commitment from the university, although universities including New York University and Stanford University have found funding for such programs, but doing so would demonstrate Georgetown’s commitment to and prioritization of students’ health, a vital aspect of cura personalis.

In commemoration of World AIDS Day, we are asking the university to honor its supposed commitment to student health and well-being by reinstating and expanding regular free HIV/STI services at the Student Health Center. HIV/AIDS remains an issue around the world, and Georgetown needs to do its part to address it by prioritizing prevention and treatment in its own community.