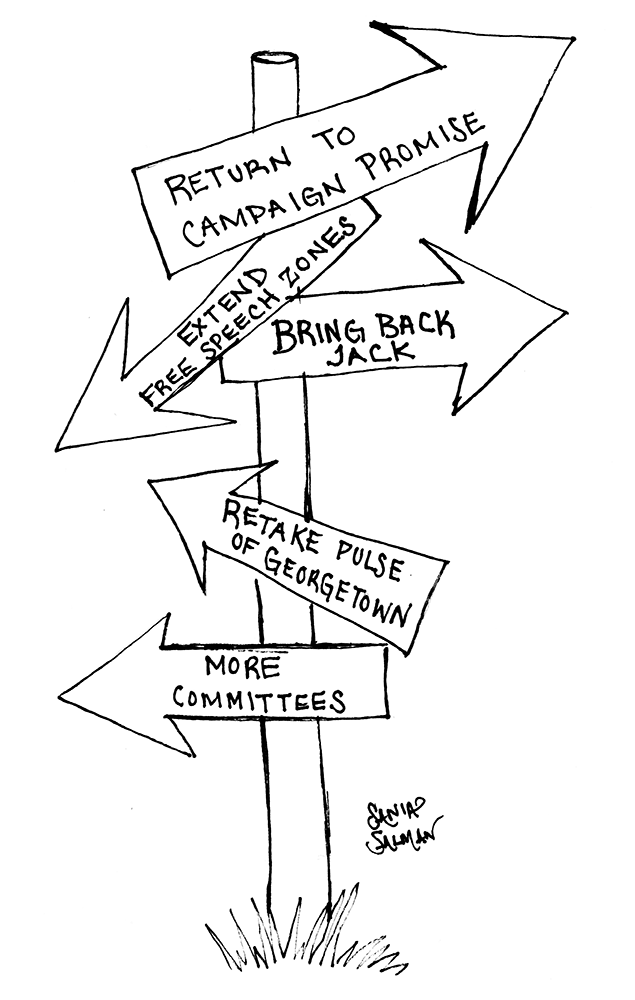 Their campaign platform, while filled with small, specific proposals, centered more on long-term, large-scale projects that may not realistically come to fruition within the limits of their term. More than any other pair running for theGUSA executive, Tisa and Ramadan emerged as the most forward-thinking and ambitious ticket — the one unafraid to tackle issues that seemed too ingrained in campus policy and identity to reform. A razor-thin victory last spring gave them the platform to pursue these goals.

Last summer saw a particularly productive period for the GUSA executive. In particular, the Office of Campus Activity Facilities’ shift into the jurisdiction of the Office of Student Affairs — a key element of Tisa and Ramadan’s campaign — presented a major step forward in maximizing use of campus space.

The flexible summer schedule also presented an opportunity for members of GUSA to expand their efforts beyond the front gates by speaking out about federal student loan interest rates, which were set to double in July. In another commendable step, GUSA launched the Georgetown Student Tenant Association in late July as a means of training advocates to facilitate tenant-landlord communication. Taken together, these accomplishments highlight an active and effective summer for GUSA.

Tisa and Ramadan’s approach has been characterized by an emphasis on leveraging and maintaining relationships. Building on the approach of former GUSA executives Clara Gustafson (SFS’13) and Vail Kohnert-Yount (SFS ’13), the current executive counts staying in tune with the “pulse” of Georgetown, as their campaign once phrased it, as one of its most important accomplishments. They have placed value in individual GUSA staff members pursuing specific projects leverage their strong administrative connections to add weight to those initiatives.

In an effort to enact change beyond their single year in office, the GUSA executive has prioritized revamping institutional frameworks. These changes — be it bringing more student voices to the table in meetings with administrators or adding committees and four deputy chiefs of staff to the GUSA hierarchy — provide a laudable bolstering of staff organization.

In late September, news of a potential off-campus housing option broke, seemingly out of nowhere. For Tisa and Ramadan, it may have come as less than a surprise, but it was nonetheless a curveball in the narrative of their term.

Initially, student response was focused on the “One Georgetown, One Campus” campaign. The campaign seems to have generated enough noise for the administration to take heed: Two weeks ago it was announced that the university is formally exploring alternatives. As the episode unfolded, the GUSA executive increased leadership both visibly and in behind-the-scenes work with administrators. Notably, despite the oppositional nature of the movement, their administrative relationships appear untarnished.

Questions remain about whether GUSA, as representatives of the student body, should have taken ownership of the campaign, but it is clear that the executives deemed it worthy of a large time investment, if not explicit institutional support. While unexpected events are inevitable, and while substantial action may have been necessary in this case, the executive must still be held accountable to their initial goals.

THE TIME TO REORIENT

Tisa and Ramadan should take stock at this mid-term and assess how to maximize their remaining four months in office. The first step will be to move beyond satellite housing. While the discussion of the 2010 Campus Plan agreement will remain relevant, the executive should now refocus its purview to equally relevant issues. In conjunction with their staff, Tisa and Ramadan have certainly accrued positive changes in their term so far, especially in building infrastructure. However, the content of these accomplishments could have been better correlated to the platform on which they ran.

Tisa and Ramadan have expended significant political capital on resistance to satellite housing. Their weight would now be well used in a return to their campaign’s pivotal promises: free speech and access to university benefits for groups such as H*yas for Choice. While recent strengthening of the Speech and Expression Committee is a start, it reflects little of the momentum or initiative the pair brought to the discussion of off-campus housing options. The campus’s speech policy, which has remained unedited for the past 24 years, presents an obvious opportunity for the GUSA executive to mobilize the student body. This is the type of university policy to which the power of referendum could be effectively applied.

Halfway through their term, Tisa and Ramadan have built a strong foundation, especially in the relationships they have been able to build and maintain across a variety of campus roles. Through force of personality and will, the two have built a powerful infrastructure. And while their administration has thus far been impacted by unexpected detours, it is now time make good on last February’s promises.