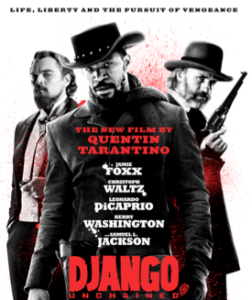 The n-word — six letters that, when together, divide, offend and restrict like no others. For some, it’s a stark reminder of brutal history and continued prejudice. For others, it’s only a word — but one that is empowered when we tip-toe around its existence and euphemize it as “the n-word.”

That’s the question of the season as Quentin Tarantino rolls out his newest feature, Django Unchained. Within the gory, pulpy, slavery spaghetti western, Tarantino drops the word 109 times. With a 2:45 run time, that’s twice every three minutes.

The film tells the story of Django (Jamie Foxx), a slave living in Louisiana, four years before the civil war. German bounty hunter Dr. King Schultz (Christoph Waltz) frees Django because the slave is the only one who knows the identity of the Brittle brothers, three high-value bounties. But soon into their journey, Schultz learns Django and his wife Broomhilda (Kerry Washington) were recently branded as runaways and sold to separate plantations. Shultz makes it his mission to reunite the two and give them their freedom as compensation for Django’s help with his bounties. This pursuit ultimately leads them to the plantation of Calvin Candie (Leonardo DiCaprio) and his quartermaster, Stephen (Samuel L. Jackson).

Tarantino’s sharp dialogue, his hand-picked set of actors and moments of zany modernity in an antebellum setting all make Unchained one of his funniest efforts yet.

In one scene, a group of proto-Klansmen debate the merits of wearing their sheeted hoods. On one hand, the eyeholes are too small for some and restrict movement. On the other, there’s a need to look intimidating. And, they can’t ignore the hard work one of the guy’s wives put into sewing them all. It’s a great bit that includes a cameo from Jonah Hill and helps set the unique tone of the film.

Tarantino’s characters also fit perfectly in his fantastical, self-contained universe. He wrote Schultz and Stephen specifically for Waltz and Jackson, and it shows. Even Django, initially written for Will Smith, comes to life with a strong performance by Foxx. Top actors continually return to Tarantino because he offers an experience and final product that simply doesn’t exist anywhere else in the industry.

His films also land because of the fine line he tiptoes between historical accuracy and modern, nearly caricatured, comedy. In 2009’s Inglourious Basterds, this first appeared when Nazi Colonel Hans Landa puffs on a monstrous pipe as he inquires about runaway Jews. In Unchained, it’s the squeak of a massive tooth on a bouncy spring that sits atop Schultz’s wagon and cuts the stillness of the cold country silence. This modern/historic paradigm shows again as Django and Schultz walk through the wilderness and Rick Ross’s “100 Black Coffins” runs in the background — God forgives, Django doesn’t.

Unchained also lives up to Tarantino’s reputation for violence. While he doesn’t quite replicate the more than 450 gallons of fake blood used for “Kill Bill,” the stylized western shootouts leave the surrounding scenery tinted in a perpetual red hue. Tarantino also explores his penchant for gore in the slavery of the period. Brutal whippings, human mandingo fights to the death and a slave’s disembowelment by hungry dogs make the film an often unsettling but visceral viewing experience.

Tarantino’s brutal scenes and modern dialogue ensure Unchained fits the author’s traditionally original mold, but they also ensure it creates the traditional amount of controversy. In Reservoir Dogs and Pulp Fiction, it was the violence. In Inglourious Basterds, insensitivity to the Holocaust. InUnchained, it’s the n-word and an accurate portrayal of slave history.

The trouble with the word is not its use, or even overuse, but its use in the Tarantino universe. In “Huckleberry Finn” or, more recently, “Boardwalk Empire,” both were period pieces, and the word use felt warranted. In Unchained, because of Tarantino’s push/pull between modern and historical, characters occasionally use the word with a hip-hop drawl or at an inappropriate time. Tarantino’s own use of the word — most notably in the part he wrote for himself in Fiction — adds to the discussion.

This is initially confusing, but it is absolutely no reason to ultimately discount, or even attack one of the best films of 2012.

In a story of oppression, penned and shot by a different writer and director, I’m not sure the 109 times would fly. But this is a story of revenge and rebirth and its auteur is Quentin Tarantino.

Django is a deep, often painful, look into the human condition as well as some of our country’s darkest times, and it is a must watch for any fan of cinema that pushes your boundaries but ultimately rewards you for your effort.