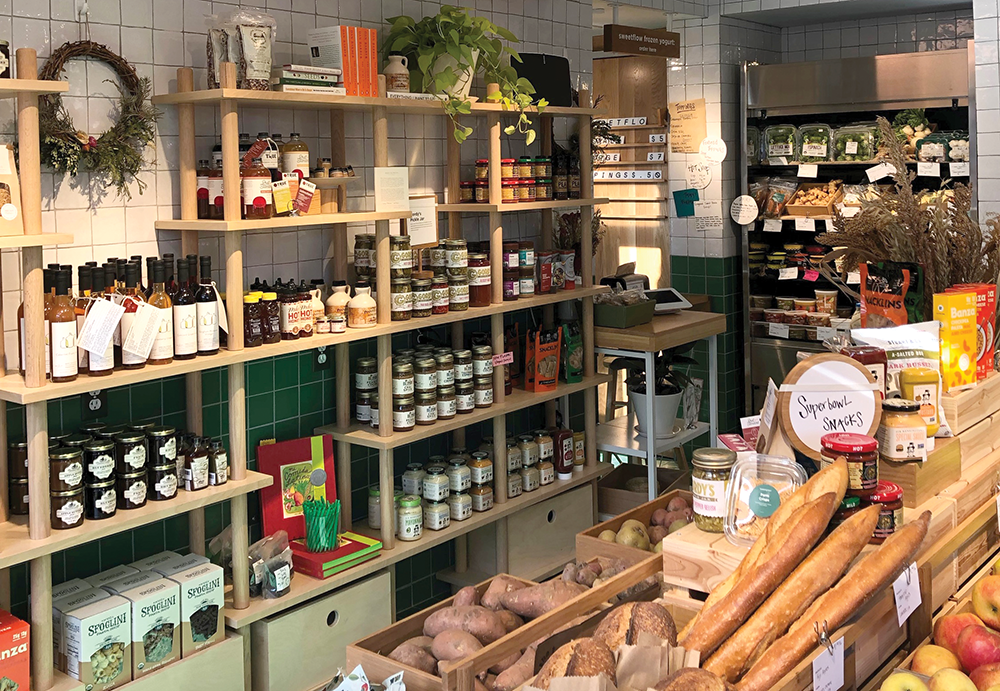 In 2007, three young Georgetown graduates founded a salad shop called Sweetgreen and opened up its first location within walking distance from their alma mater on M Street. A few months before the unveiling of Sweetgreen’s large Wisconsin avenue location in spring 2017, the original shop closed its doors for renovation without announcing concrete future plans, surprising and confusing its customers.

The original location’s doors finally reopened in August 2018 and introduced Georgetown to The Tavern, a healthy marketplace that reflects Sweetgreen’s founding principle of using locally-sourced food while arguably catering to a different demographic than its predecessor.

Sweetgreen leapt into popularity after its opening in 2007 and quickly grew into a chain. Although the chain now boasts nearly 100 locations and its founders are a well-known post-grad success story, its origins can be traced back to the tiny, green-roofed cottage that is a notable fixture on M Street. Hoyas and Georgetown residents who frequented the location until its closure in spring 2017 likely remember the snaking lines and absence of personal space any time they went there for a salad, some indicators that Sweetgreen had outgrown its original shop.

When the M Street shop closed its doors, the shop’s regulars were left wondering what it would become. Rumors circulated of a solely to-go location but no definite plans came about, leaving Georgetown students to mourn the convenience of their favorite salad spot.
In August 2018, the M Street shop was reopened and reinvented. Instead of a salad stop, The Tavern, named for the burger joint that preceded the original Sweetgreen, according to an interview with the Washingtonian,  is a small marketplace focused on local farmers and the healthy, fresh produce used in Sweetgreen salads.

An homage to the founding principles of the chain – healthy, fast-casual food – The Tavern sells local fruits and vegetables, Sweetgreen-brand trinkets and apparel, artisanal packaged snacks and, perhaps a favorite for longtime Sweetgreen fans, “Sweetflow,” the frozen yogurt that was an original menu item. Sweetflow has now also undergone an upgrade with help from Union Market’s Dolcezza gelato factory and is poised to be more delicious than ever.

The Tavern is thoughtfully laid out and extremely well-curated. Particularly since its new store type does not attract hordes of mealtime customers, the space feels brighter and more open. Visitors can leisurely explore while tasting samples of some of the foods and ask questions of the highly knowledgeable staff. The Tavern’s food offerings are diverse: varied bottled waters and juices, a wealth of packaged snacks and a selection of produce as well pre-prepared foods like soups, quiches and pies are all available. Everything is locally sourced and often from small farms, and the staff is attentive to customer needs being met. If patrons think of something that they want to see offered, The Tavern will try to bring it to shelves.

The Tavern in many ways satisfies a niche: It is a grocery store in a neighborhood whose only other similar fixture is Dean & Deluca, which is more expensive. The marketplace also gives customers access to specific, healthy foods that are not widely offered.

While many Georgetown students used to flock to the relatively affordable, nearby, delicious salad shop during mealtimes, they appear less drawn to The Tavern, likely since it sells groceries rather than prepared salads and because its new offerings are artisanal and thus somewhat pricey. Some students, like Katherine Furse (NHS ’20), question the consumers that The Tavern has in mind.

“The Tavern seems like it’s more geared towards affluent Georgetown community members rather than the general student body,” Furse said.

What students may not realize is the ways in which The Tavern focuses on their demographic: There is a 10 percent student discount, Georgetown students may pay by GOCard, and you can order to-go salads on the Sweetgreen app by selecting “sg Outpost at The Tavern.” Students can pick their orders up between 12 p.m. and 7 p.m., Monday to Friday.

“Their produce is from farmers they want to work with but who aren’t big enough to fully supply their stores,” Alrajjal explained.

Alrajjal doesn’t frequently shop at The Tavern, but she hopes that others recognize its value.

“Dean & Deluca is the same concept,” she says, referring to the high prices and specialty food, “but The Tavern has better intentions.”

In addition to its local offerings and informed staff, The Tavern also hosts community events. For example, every few weeks there is an event called Community Graze where, for a low flat rate, you can experience prepared food highlighting the local farmers and companies whose products stock The Tavern. Community Graze is all-you-can-eat, including Sweetflow. The show is open during the event, so if you love something you can buy it to bring home.

Although fans of the original Sweetgreen may miss the convenient salad shop, a visit to The Tavern still has plenty to entice them, as the marketplace has a wealth of valuable and delicious offerings that still follow the philosophy of the beloved restaurant that came before it.

The Tavern is located at 3333 M St NW and is open every day from 11 a.m. to 8 p.m. They can be followed on Facebook @thetavernsweetgreen. The Georgetown neighborhood Sweetgreen salad location is now at 1044 Wisconsin Avenue.