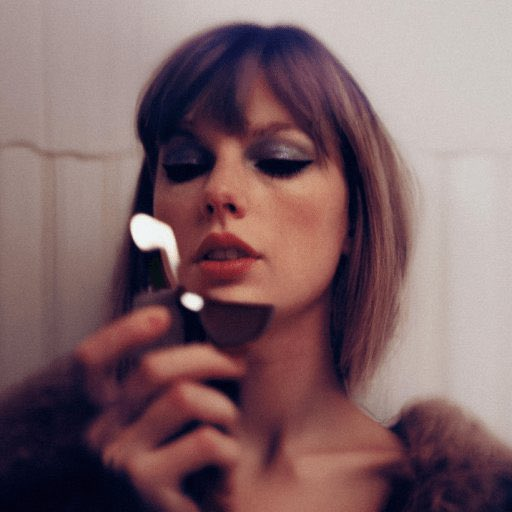 “3 a.m. and I’m still awake” — because Taylor Swift kept us up for yet another sleepless night with her 10th studio album, not including her re-releases, “Midnights.” Swift promised mayhem, and she definitely delivered. From the sneak peek of the album during Thursday Night Football, to the seven bonus tracks chaotically dropped at 3 a.m., Swift has kept her promise of “Midnights Mayhem.”

The concept album, which Swift calls a collection of “13 sleepless nights,” touches upon themes of falling in and out of love, self-doubt and revenge. Swift is known for her ability to switch from genre to genre seamlessly, and “Midnights” is no exception.

The album opens with “Lavender Haze,” a song Swift said is about “the act of ignoring [weird rumors and tabloids] to protect the real stuff,” also known as her relationship with long-time partner Joe Alwyn. Within seconds, it sets the sonic tone of the album, letting fans know she’s moved past the melancholic indie-pop sound of her surprise eighth and ninth studio albums “folklore” and “evermore” into a more upbeat, synthetic pop vibe.

Swift highlights the media’s obsession with her relationships, stating: “All they keep asking me / Is if I’m gonna be your bride / The only kinda girl they see / Is a one night or a wife.” However, while these breaches of her privacy weigh heavily, she still holds on to the “Lavender Haze,” a phrase originating in the 1950s, which references an all-encompassing love.

“Anti-Hero,” which, while also upbeat sonically, is made up entirely of Swift’s self-doubts. In the chorus, Swift laments “It’s me, hi / I’m the problem, it’s me.”  Swift reflects on her insecurities and tabloid drama with these lines, hoping to find strength in disarray.

The lyrics, though simple, seem to resonate with a lot of people, already becoming a trending TikTok audio. The song was also the album’s lead single, gaining a music video on release day.

Swift continues with this theme of falling in love throughout the album with tracks like “Snow on the Beach” and “Sweet Nothing.” The former, which features Lana Del Rey, articulates the wonderful absurdity of someone you love reciprocating your feelings at the same time: “It’s like snow on the beach / Weird, but fuckin’ beautiful.”

The song starts off sounding similar to a classic Christmas song, but, for many, it led to disappointment, given Del Rey is only included in background vocals, rather than a solo verse.

“Sweet Nothing,” on the other hand, is one of the most stripped down songs of the album, presenting Swift’s haunting vocals with a simple melody, emphasizing the simplicity of the “Sweet Nothing” she mentions. In her love, she can give nothing and still be loved and valued simply for who she is, beyond the fame and money.

On the flip side, Swift delves into the experience of falling out of love in the track “Midnight Rain,” in which she tells listeners how she “broke his heart ’cause he was nice.” The song begins with her distorted voice echoing the chorus — a controversial choice. Fans seemed to find it annoying at first, but with each listen it becomes more appealing, adding to the ambience of the song and accentuating the chorus.

“Bejeweled” also spotlights a crumbling relationship, with Swift reclaiming her value from her underappreciating lover and reminding them that she “can still make the whole place shimmer.” It’s upbeat and shimmery in sound, if that can be used to describe music.

Arguably, the most memorable track on “Midnights,” however, is “Vigilante Shit.” The song is the only song on the album to have an explicit word in its title and  begins with a resounding bass and the line “Draw the cat eye sharp enough to kill a man.”

The song lyrics are rather simple, but they transition into the exact mood she wants for the song: Everything about it screams power and vengeance. Fans noted the connections between the song and her sixth studio album “Reputation,” as the song alludes to drama surrounding the former holder of her masters, Scooter Braun.

The highly anticipated “Karma” draws on the theme of revenge as well, but with a lighter beat. It’s less intense, but just as in-your-face about how her enemies will get what they deserve: “Karma’s a relaxing thought / Aren’t you envious that for you it’s not?” The song seems to poke fun at Braun, who is currently facing legal troubles and family conflict.

Swift also adds some debatably less sophisticated lyrics in the song, including “Karma is a cat / Purring in my lap ’cause it loves me.” Yet it still remains entirely Swift, who is well-known for her love of cats.

In many ways, “Midnights” has exceeded expectations. The album is critically acclaimed, made history with a Top 10 sweep of the Billboard Hot 100, and became the most-streamed album on Spotify in a single day.

Swift puts to words some of her greatest insecurities on “Midnights” while still maintaining an overall upbeat mood. She explores a new sound and combines several themes into one sonically cohesive album, tying it together with an undistilled surety in her emotions.

Though Swift arguably leans into production flourishes rather than her strength of songwriting in this album, the lyrics are still mind-twistingly gut-wrenching, even if they are not quite as poetic as those from her previous albums.