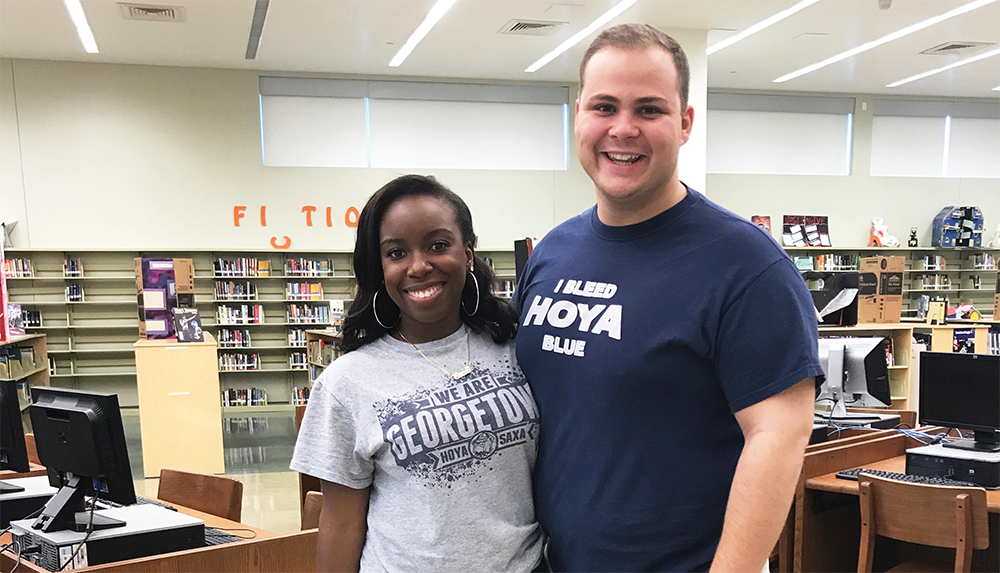 Georgetown sent the second-most graduates to work for education nonprofit Teach for America in 2017 among similarly sized universities.

Twenty-six Georgetown graduates joined the TFA teaching corps, a body of students recruited to teach in low-income schools across the country for at least two years. The university tied for second place among medium-sized schools — between 3,000 and 9,999 undergraduates — with Boston College and neighboring Howard University. Emory University sent the largest cohort: 34 students.

The organization’s mission, according to Georgetown TFA recruitment director Deanna Lockey, is to pair teachers from underprivileged backgrounds with students in low-income K–12 schools.

“We’re looking for people to, first of all and most importantly, believe that all kids can learn and that they want to do whatever it takes to expand opportunities for students in low-income communities,” Lockey said.

Many recently recruited TFA teachers are among the first generation of their family to attend college and were taught by TFA staff when they attended elementary, middle or high school, Lockey said.

TFA corps members go on to teach anything from U.S. history to science in 53 regions spanning the continental United States and Hawaii. They arrive in environments often marred by high rates of attrition.

Eric Scheetz (SFS ’17), who teaches 10th-grade English, joined a Philadelphia classroom that had gone through two different teachers in one school year.

“They’re immediately hesitant of anyone who comes in the door — they think I’m going to quit,” Scheetz said. “I have incredibly smart kids but oftentimes they either have been told that they don’t know how to work or they find a lot of creativity drain out of them.”

Chris Fisk (COL ’17), who teaches 9th-grade English and Advanced Placement Human Geography in Miami, said part of what drew him to TFA was the ability to give back to the community where he grew up.

“[My Georgetown education] afforded me a deeper understanding of the fact that I not only had the ability to make decisions to better my own life, but also the ability to positively affect the lives of others,” Fisk wrote in an email to The Hoya. “It goes without saying that any opportunity to show another generation of students what that feels like, what that means for their lives, what that means for their families, and what that could mean for others, was certainly worth pursuing.”

Prior to establishing these teacher-student relationships, prospective corps members must complete an extensive recruitment process replete with information sessions, applications and interviews. To help students navigate the process, TFA has designated Lockey as an adviser and mentor for applicants.

“There are so many students who are interested in social impact work, but don’t necessarily know the best place for them in that work,” Lockey said. “I sit down with students one-on-one and help them realize whether or not their leadership opportunities that they have experienced both on campus and off campus are relevant.”

Since Georgetown does not offer an education major, students turn to extracurriculars to showcase their passion for education and social impact, Lockey said.

“They might be involved with New Student Orientation or residence housing or [Georgetown University Student Association] or Innovo Consulting,” Lockey said. “I think there are so many opportunities at Georgetown for students to gain leadership skills and we’re looking for that strong achievement, but it doesn’t have to just be academic or professional.”

The College currently has a minor in Education, Inquiry and Justice, a six-course program that offers classes such as “Theatre, Writing, Community” and “Educating the Whole Child.” Students in other schools cannot pursue the minor, but they can take some of the classes.

Despite being in the School of Foreign Service, Scheetz took courses to develop his passion for education equity and policy through the Alpha Phi Omega service fraternity and the Alternative Breaks Program, run out of the Center for Social Justice.

“I think there should be an SFS certificate equivalent,” Scheetz said. “This is the first year of the Educational Transformation Masters program at Georgetown, and so as that becomes established, if some of those courses became available to undergraduates that would be great.”

After being admitted into the teaching corps, students can then rank their regional preferences. To help narrow down the list, TFA provides a spreadsheet that lists each region and its lifestyle markers, such as transportation access, average monthly rent and certification costs.

The document also includes other identity-based considerations, such as support groups for LGBTQ individuals and work eligibility for teachers without documentation who benefit from the discontinued Deferred Action for Childhood Arrivals program.

Rio Djiwandana (COL ’16), who is a DACA recipient and teaches 8th-grade mathematics and special education classes in New York City’s Bronx borough, said TFA’s robust resource network is unlike any other.

“As a ‘DACAmented’ corps member, TFA provided me with legal assistance, additional financial support and extensive community-building opportunities that would not have been available to me elsewhere,” Djiwandana said.

Nevertheless, in a university where 40 percent of 2016 graduates went into financial services or consulting, choosing the teaching route may seem unusual. There is a negative stereotype that TFA is a fallback for unsuccessful consulting recruits.

Djiwandana, Scheetz and Fisk disagree. The demanding nature of the job, they say, requires commitment and authenticity.

“I’m pretty sure we all had other options, but this was where our passions led us,” Fisk wrote. “Now a few months in, I can confidently say this is not a job or a lifestyle that you just pursue as a backup plan — you have to really want it.”