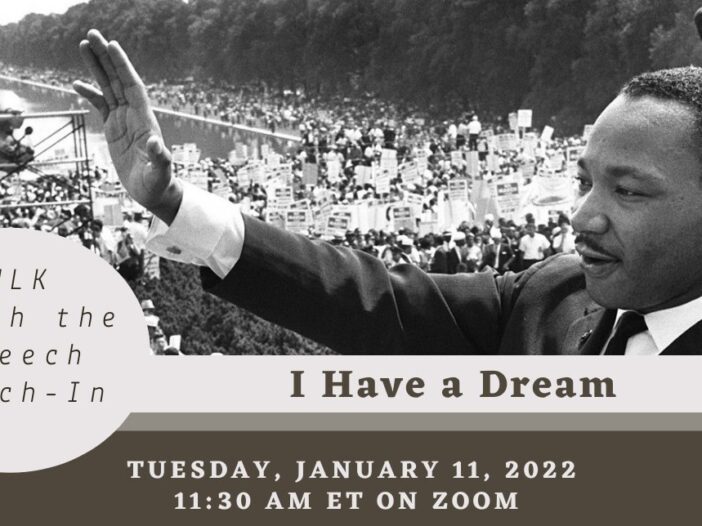 Georgetown students, faculty and other community members gathered at the recent Teach the Speech virtual teach-in to reflect on Martin Luther King, Jr.’s 1963 “I Have a Dream” speech.

The teach-in took place Jan. 11 and featured keynotes from state Senator Jennifer McClellan (D-Va.) and Neonu Jewell (LAW ’04). Veronica Williams (COL ’23) also spoke at the event, the second student to do so.

The event was part of the Let Freedom Ring! initiative, and was co-hosted by the Center for Social Justice Research, Teaching, and Service (CSJ), the Center for New Designs, Learning and Scholarship (CNDLS), the Doyle Engaging Difference Program and the Division of Student Affairs.

The speakers contextualized King’s speech in contemporary discourse on race, according to Ijeoma Njaka (GRD ’19), professor and senior project associate for equity-centered design and inclusive pedagogy at Georgetown.

“The guest speakers situated the speech in our current moment and the rise of folks being afraid of critical race theory and the controversy and the misappropriation of critical race theory and the misappropriation of King’s quotes on social media or the ways in which King’s words get invoked in a way that undercuts the radical nature of his messages and his life’s work,” Njaka said in an interview with The Hoya.

After the speakers’ presentations, the three participated in a Q&A session with community members that Njaka facilitated.

Williams said she found her own educational experience left out Black history beyond slavery or the civil rights movement.

“In my reflection, I discussed that growing up throughout my K-through-12 education that Black history overall wasn’t mentioned a lot outside of slavery, segregation, civil rights movement and Dr. King’s ‘I Have A Dream,’” Williams said in an interview with The Hoya. “Then, everything was fine after that — there’s no more racial oppression, nobody’s racist anymore. That was kind of the frame throughout my education in high school.”

Contextualizing King’s words from his “I Have A Dream” speech is important to maintaining the spirit of his work, according to Williams.

“I was finding that Dr. King’s life, legacy and words were being used for certain things that he had not intended for them to be used for. Not just that people have been twisting his words in media recently, but a lot of politicians, for instance, have used his words to try to attack critical race theory,” Williams said.

The event provides a space for members of the Georgetown community across schools to reflect on King’s work, according to CSJ director Andria Wisler.

“Every year diverse faculty and staff across the University — from Law to Med to SCS to GU-Qatar to Main Campus — incorporate the Dr. King speech into their educational spaces (classroom teaching, meetings, etc.),” Wisler wrote in an email to The Hoya. “This cross-campus co-curricular project offers an opportunity for members of the GU community to spend time with Dr. King, meeting King again, through listening to and reflecting on his speeches.”

Teach the Speech emphasized that maintaining the original meaning of King’s words is essential to reading his speeches today, according to McClellan.

“As our nation deals with politically motivated attempts to limit the teaching of complete and accurate history, it’s critical that we understand the full context of Dr. King’s words and his work to build the Beloved Community,” McClellan wrote in an email to The Hoya. “Dr. King spent his life working to redress inequity and making the reality of our nation match the promise of its founding principles. With civil rights and voting rights now under attack, we must retain the fierce urgency of now to act on Dr. King’s vision.”

While in previous years there have been more opportunities for hands-on workshops or conversations, the keynote speakers remained a highlight of this year’s program, according to Njaka.

“Because of the pandemic, the omicron surge, and trying to be cognizant of Zoom fatigue, this was a little bit shorter of an event that focused more on the keynotes as opposed to also trying to include a longer explicit workshop,” Njaka said. “I’ve always enjoyed the keynotes. Across the years that I’ve been at Georgetown and been able to attend Teach the Speech, that feels like a consistent piece of the program that has always been there and that I’ve always enjoyed.”

This article was updated on Jan. 28 to correct a detail about the event.