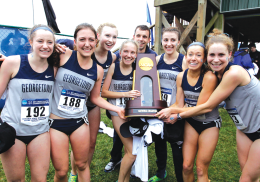 A team ranked No. 1 in the preseason is supposed to win the national championship, but the women’s cross country team’s journey to its first title was anything but smooth.

Georgetown began the season brimming with well-deserved confidence. The squad was set to return several All-Americans and boasted a stellar freshman class.

The Blue and Gray backed up their preseason ranking by demolishing their admittedly weak competition in the Harry Groves Invitational in September, universally validating their potential, including to Miltenberg.

But just as everything fell into place for Georgetown, the team faced seemingly insurmountable adversity. Three All-Americans — junior Rachel Schneider, senior Katie McCafferty and sophomore Madeline Chambers —  were forced to redshirt due to injuries. And as if that weren’t bad enough, senior and eight-time All-American Emily Infeld got hurt in late September.

“Just about everything that could have gone wrong went wrong,” Miltenberg said.

The Hoyas limped through the rest of September, finishing fourth in the Paul Short Invitational behind three Big East teams and getting crushed by Florida State in the Pre-National Invitational.

“After Pre-National, we talked in the hotel about how everybody had written us off,” Miltenberg said. “And that’s when this team came together. … It’s not about winning a national championship but about being the best we can be.”

Infeld’s health began to improve before the Big East championship, and

the team started to pick up the pieces of its bad month. Despite finishing third, the Hoyas looked more like a team that deserved its No. 1 preseason ranking.

“When we left the Big East [championship], that’s when we really started to find our soul,” Miltenbergsaid.

Georgetown took that momentum into the Mid-Atlantic Regional championships, where they finished tied for first with Villanova, a victory that Miltenberg views as another turning point for the Blue and Gray.

“That’s when we were getting really good at the right time,” Miltenberg said. “We started to run together, and our freshmen just ran phenomenally.”

That was clear during the national championship.

Infeld led the way with a fourth-place finish overall. She was followed by graduate student Claire Richardson and junior Emily Jones, who took 50th and 54th places, respectively. The final two runners to score points for the Hoyas were junior Kirsten Kasper and freshman Katrina Coogan, who finished 64th and 67th, respectively. The progress that the Hoyas made throughout the year did not come in the form of better individual efforts; it came from a wealth of talented athletes who ran as one.

“I think the most gratifying thing … is that Coach Miltenberg [carried] such a positive manner, and it was such a great team effort,” Director of Track and Field and Cross Country Patrick Henner said. “It wasn’t just an assemblage of talent. It was a true team effort.”

Miltenberg deflected his national coach of the year accolade to the athletes and coaches around him.

“For me, the [award] is a testament to the great people we have here,” Miltenberg said.

The team could not have worked together the way it did without the leadership of its upperclassmen. Jones and Infeld were instrumental in guiding the freshmen, who, because of upperclassman injuries, were asked to take on a bigger role in the team than they had expected.

“Infeld had a lot of ups and downs in September and October, but she never stopped believing in her team and her teammates,” Miltenberg said. “Emily Jones was a great example of running for your teammates. And the freshmen rose to the occasion.”

The national championship was the last time Infeld will run for the Hoyas as a member of the cross country team, though she still has a year of eligibility left in both indoor and outdoor track.

“She’s one of the most accomplished athletes in Georgetown history,” Miltenberg said. “The biggest impact she had on our program is who she is and what she brought to practice every day. She’s fired up, excited and … responds to adversity with excitement and intensity.”

And adversity is exactly what the Hoyas faced all year. But with the upperclassmen’s leadership, the freshmen’s emergence and Miltenberg’s guidance, Georgetown refused to unravel.