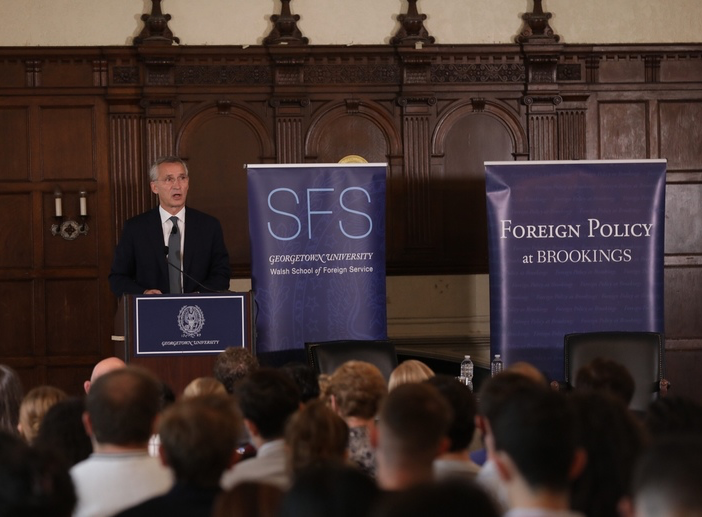 The event, titled “NATO in a Competitive World,” was hosted by the Walsh School of Foreign Service and the Brookings Institution, a nonprofit public policy organization. Stoltenberg, who served two terms as prime minister of Norway, spoke about NATO’s emerging technological programs to combat burgeoning security threats. The conversation was moderated by Dr. Michael O’Hanlon, the Brookings Institution’s director of research in foreign policy and adjunct professor at Georgetown’s Center for Security Studies.

NATO is at a critical point where it is facing new security threats, according to Stoltenberg.

“We are at a pivotal moment for our shared security where we face a more dangerous and more competitive world. Russia is more aggressive abroad and more oppressive at home. China is using its economic and military might to control its own people, coerce other countries, and assert control over global supply chains, critical infrastructure and other assets,” Stoltenberg said in the event. “We also face more frequent and sophisticated cyber-attacks, persistent terrorist threats and the security impacts of climate change.”

NATO was formed in 1949 as a military alliance between 12 North American and Western European countries to provide collective security against the Soviet Union. Since then, it has expanded to include 30 member states and aims to guarantee the freedom and security of its members through political and military means, according to its website.

In order to adapt to 21st century challenges, NATO’s members are increasing military spending and developing technological solutions through civil-military partnerships, according to Stoltenberg.NATO created the Defense Innovation Accelerator for the North Atlantic (DIANA), a proposal for the NATO 2030 agenda that is a roadmap for the coming decade that will prepare the organization to combat predicted threats. DIANA provides a space for civilian and military organizations to work together in fields such as artificial intelligence, quantum computing, biotechnology and space to secure NATO’s technological advantage against security threats.

In addition to the cyber program portion of DIANA, NATO has also developed offensive cyber technologies to combat cyber threats from non-state actors like the terrorist organization ISIS, also known as DAESH, according to Stoltenberg.

“We have also developed what is referred to as ‘national cyber effects,’ which is actually offensive cyber. NATO allies have used them against ISIS, or DAESH, to take down their cyber networks as part of the fight against ISIS. So we exercise, we train, we share best practices. We need to maintain our edge in the cyber domain to remain the most successful and strongest alliance in history,” Stoltenberg said.

NATO has also prioritized increasing cooperation with non-Atlantic allies to address future needs, according to Stoltenberg.

“We are stepping up to defend the rules-based international order by deepening our cooperation with like-minded countries and organizations, including in the Asia-Pacific,” Stoltenberg said. ”For the first time in our history, we are putting climate change and security at the core of NATO’s agenda.”

NATO’s allies in the Asia-Pacific region include Australia, Japan, the Republic of Korea, and New Zealand. The four Pacific countries joined a NATO Foreign Ministerial Meeting for the first time in December 2020. At the meeting, the countries discussed the rise of China, a persistent concern during Stoltenberg’s tenure leading the organization.

Multilateral alliances like NATO enable their member countries to effectively confront obstacles, according to Stoltenberg.

“None of us can face these challenges alone. No country, however big, and no continent, however rich. Neither the U.S. nor Europe alone. But in NATO we are not alone. Together we represent 30 different nations, 1 billion people, half of the world’s economic and military might, and together we are adapting to a more uncertain world,” Stoltenberg said.

The future of global security is unpredictable, but a multilateral approach strengthens the ability to continue to respond to emergent threats, according to Stoltenberg.

“We do not know what the next crisis will be. But we do know that whatever happens we are safer when we stand together,” Stoltenberg said.