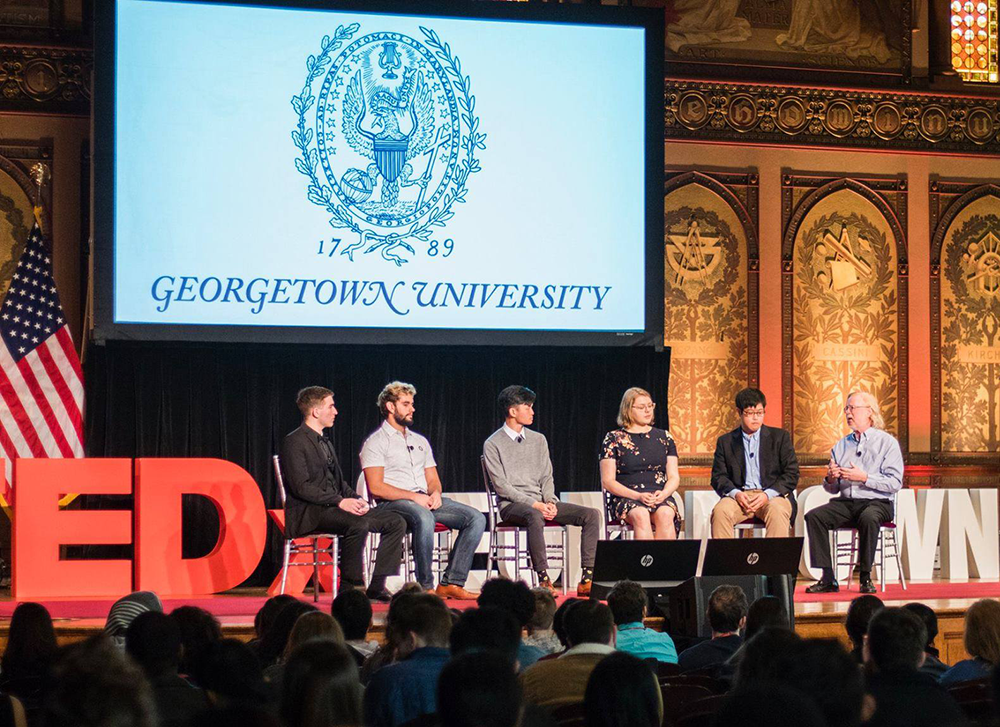 The seventh annual TEDx Georgetown conference presented fourteen speakers, including Muslim chaplain Imam Yahya Hendi and Robert Bies, professor of management and director of the Executive Master’s in Leadership program at the McDonough School of Business, who spoke around the theme “Ignite.”

The Oct. 27 conference in Gaston Hall included 10 student speakers and four external speakers. There were three sessions throughout the day and each speaker gave 20-minute-long speeches. The speeches were organized around a time when a speaker “felt a point of ignition in their lives,” according to Kevin Durham (MSB ’19), TEDx Georgetown co-chair.

TEDx came to Georgetown seven years ago as a part of the efforts of TED, a nonprofit organization that hosts conferences relating a range of topics, which include technology, engineering and design, to support locally organized conferences.

To achieve success, students should take proactive steps in the direction of their vision, Bies said.

“To embrace your greatness, you’ve got to dream big,” Bies said. “Don’t just dream, though, do. It’s about taking action. You want to be in the approach of taking opportunities for small wins.”

Speaking about her own challenges with obsessive-compulsive disorder, a long-lasting disorder that causes a person to experience uncontrollable thoughts and urges to repeat specific behaviors, as a part of TEDx Georgetown offered Courtney Ryman (COL ’19) a way to fight the stigmas surrounding her mental illness, she said. OCD, which Ryan said causes her to have obsessions based on falsities, damaged her friendships.

“The social casualties of my OCD are vast,” Ryman said. “I began to think that I didn’t have OCD, but that I was OCD. … If OCD hadn’t been a good friend to me, why would it be friends to anyone else? I dissolved my friendships and I didn’t try to create new ones. I abandoned the people who did not abandon me.”

“Our brain is wired to look for certainty, places where we feel safe,” Terminel said. “You can always seek discomfort. You can always look for diversity. You can always stay curious, and by doing so, you can become a stronger leader and come to ignite change in the world.”

Emilio Joubert (COL ’19) attributed part of his success despite hardship in his childhood to mentorship. During his youth, his mother was diagnosed with cancer and his father suffered declining mental health in the midst of financial hardship.

“The most important piece of growing up for me was education. And I feel like a younger version of myself would attribute the success that I’ve had today with my own skill, with the things I’ve put together, with how hard I’ve worked,” Joubert said. “But I realize now that if it wasn’t for those people who came together and believed in me when I thought I had nothing left, that I wouldn’t be half the man that I am. And so it is because of mentorship that I’ve become the man I am and have been able to succeed beyond all measures.”

Teachers who successfully relate to their students do so through authenticity and the ability to overlook stereotypes, Smalls said.

“Teachers have to balance vulnerability and love, they need to leave their preconceived images of students by the door,” Smalls said. “Curious teachers learn about their students.”

Everyone should consider what impact they will have on the world around them as they pursue their goals, Bies said.