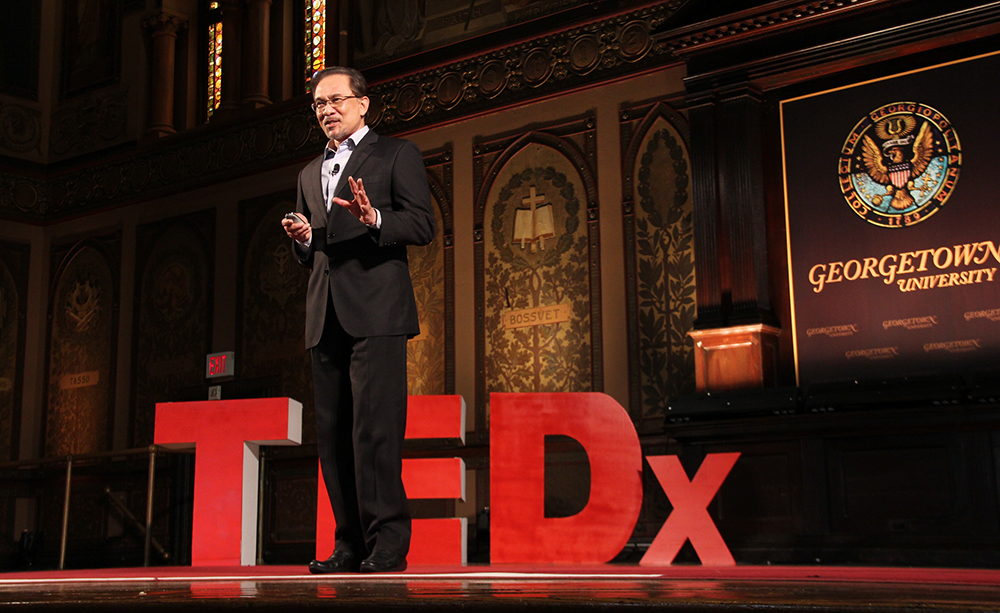 Talks from students, faculty members, staff members and individuals from outside of the university community were separated into three sessions, titled “Formation,” “Trials” and “Coda,” with breakout groups including individual speakers following each session, a new addition.

Conference Chair Cheryl Lau (SFS ’16) said these additions made the event more interactive than in previous years. She added the breakout sessions improved the overall experience of the event.

“We wanted people to talk to the speakers, get to know them on a human level, and really think about all these ideas rattling around in their head,” Lau said.

University President John J. DeGioia opened the event, setting a tone of self-discovery with a purpose that was woven throughout the conference.

“What is formation? This is the process through which we discover a most authentic self, a self that only we are called to be,” DeGioia said.

The first speaker, Center for Social Justice Executive Director Andria Wisler, shared her story of personal formation teaching at a school for at-risk girls, emphasizing that while she may have told her story alone on stage, formation cannot happen alone. She also encouraged students not to delay service and social justice until after college.

“This denial of the college years as the real world, sarcastically or seriously stated, acutely diminishes the hope for any personal transformation, as well as transformation of our communities, starting with our shared communities here on the Hilltop,” Wisler said. “College is not a time separate from some larger, bigger, better life. Believe me, this is the real world.”

Vice Provost for Education Randall Bass spoke about redesigning the university to include high-impact formal learning and experiential co-curricular learning.

“It’s already starting that for the first time now in maybe a thousand years, the university no longer has a monopoly on learning and certification,” Bass said.

Davis Performing Arts Center Artistic Director Derek Goldman framed his discussion of theater in a global context by a performance of his own.

Goldman described the importance of theater in areas of limited free speech, such as Belarus, Poland and Sudan, and detailed the interdisciplinary work of the Laboratory for Global Performance and Politics and his courses at Georgetown.

Former Malaysian Deputy Prime Minister and current opposition leader Dato’ Seri Anwar Ibrahim detailed his experience with police brutality and unfair detention as a political dissident in Malaysia and his return despite the threat of re-imprisonment.

Josephine Moore (SFS ’16) addressed eating disorders as addictions in her speech, drawing from her personal experiences. She emphasized that eating disorders are addictions with psychological foundations, and not just body image issues. Moore encouraged those suffering from eating disorders to seek help from friends and loved ones, and urged the Georgetown community to break the silence surrounding the issue.

“Eating disorders are coping mechanisms, your way to deal with your problems when everything in your life seems out of control and unmanageable,” Moore said.

Alisha “M’Jestie” Brooks, songwriter and founder of Dream City University, told her story of becoming a songwriter as a teenage mother. After achieving success writing for Rihanna and Victoria Beckham, however, Brooks wanted to expand her work to realizing the dreams of others.

“My dream was to have the attention of the world. I had that and all I said was ‘Turn the music up.’ That’s pretty sad, right? I wanted something different,” Brooks said.

Brooks founded Dream Little Dreamer, now known as Dream City University, a company that educates young people about how to break into the entertainment industry.

“When you help somebody start a business, you’re not only removing dependence on a third-party organization, you’re boosting local economies, and I think that the most important part about helping someone start a business is you are instilling the power of change and the power of development within their own selves,” Davis said.

GU Pride President Thomas Lloyd (SFS ’15) closed out the second session with his story of LBGTQ advocacy, an answer to the question that titled his presentation, “Why Am I So Gay?”

“For me it comes down to three things,” Lloyd said. “One is my obligations to history. Two are the realities of my own identity. And lastly are obligations for those yet to come.”

Lloyd described his struggle to accept himself and discussed building off of the experiences of those who came before and working for the futures of others at his high school and at Georgetown, despite its checkered history toward LGBTQ students.

“Part of Georgetown owning its history and owning its identity means now that other institutions, our peer Jesuit and Catholic institutions, and any other faith-based institution cannot say that they have this irreconcilable difference with their LGBTQ students,” Lloyd said. “Georgetown is more Catholic today because there are fewer hate crimes.”

The event closed with a session emphasizing forward motion.

Adan Gonzalez (COL ’15), a first-generation Latino college student from a low-income background spoke of his challenges and the work yet to be done in expanding opportunity in the United States. He founded the Sí Se Puede Network and has worked with over 100,000 students and parents to provide resources for education.

“Live to serve for a greater good. What does that mean? Our communities do not need a superman. We need each other to help discover our own powers,” Gonzalez said.

At the end of his talk, Gonzalez brought his father, who had never before been able to travel to see his son at Georgetown, onstage to a standing ovation.

Dibinga’s background from a low-income Congolese family inspired him to start his organization, UPstander International.

“My organization is called UPstander International because I’m part of a community that takes a stand when we hear about these issues,” Dibinga said. “And so with my work, we speak to people. Maybe not a lot of people are listening, but we never stop. Many of us got this education and don’t know a lot about what’s happening outside of these doors. But you’re directly connected to a world community.”

Sheryll Cashin, professor of law at  the Georgetown Law Center and author of “Place Not Race: A New Vision of Opportunity in America,” gave a talk paraphrasing a letter to her two sons from her book, touching on perseverance, family legacy and race.

“One day, you will cease being adorable in the eyes of other people,” Cashin said. “And all I can do is prepare you for that. Before your first facial hairs emerge, you will notice that some people are afraid of you. I take heart in the fact that your generation will be better. … But you won’t realize your potential if you don’t consciously try to build multiracial coalitions for the common good.”

The event ended with Christoper Wadibia’s (COL ’16) talk on faith. As the first student from his high school to attend an elite university, Wadibia presented his idea of church nationalism, faith outside of the context of culture-based organized religion.

“Church nationalism promotes the idea that it’s not about titles and affiliations. It’s about the sincerity of your existence,” Wadibia said. “It’s about the disposition of your heart, your relation to God, the curiosity that is within your heart and your hunger to understand the divine in some capacity. Church nationalism is also about the idea of your outward behavior matching your inward passion, your inward joy.”