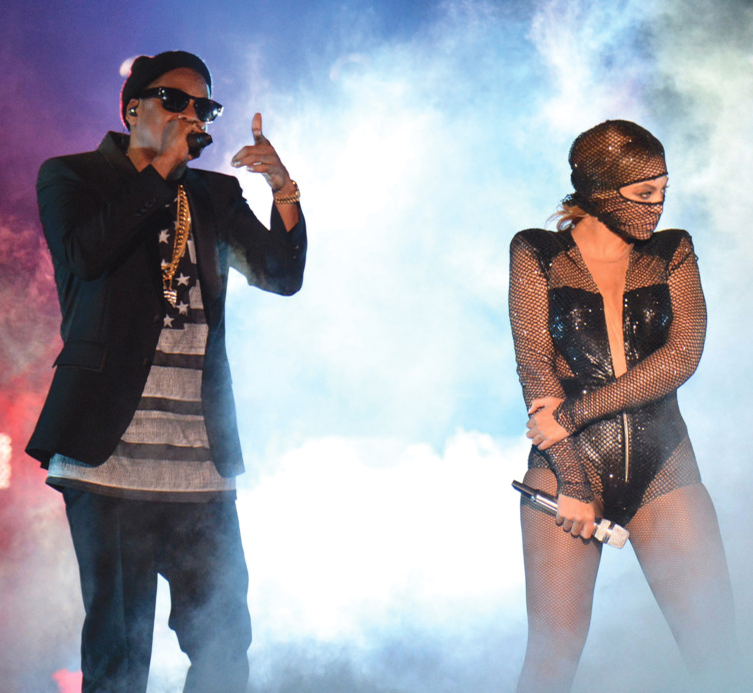 When you think of Beyoncé and Jay-Z, what images pop into your head? Is it Brooklyn and Houston and mind-boggling personal and professional success? Or is it a gang king and a princess taking names at any cost, careening out of control until they reach their bitter end?

Chances are it’s not the second one, but that’s not what their latest concert tour “On the Run,” recorded exclusively for HBO, tries to convince us. What this show sets out to do is establish Bey and Jay as a modern day Bonnie and Clyde through an immersive audio and visual experience. It seems like they took the storytelling standard set by Beyoncé last December and expanded it to full concert-scale, which in Paris means a bombastic two-and-a-half hour performance in front of thousands of people.

Despite being billed as both a Jay-Z and a Beyoncé concert, Bey is the absolute star of the show. Jay mostly feels like a tacked-on hype man. He’s mostly there to fill the awkward pauses when his wife disappears to change into her next outrageous yet stunning costume.

One aspect of  Jay-Z’s performances that struck me as odd was the overwhelming but unspoken presence of Jay’s other life partner, Kanye West, whether it was the use of the beats from “Hell of a Life” off 2010’s “My Beautiful Dark Twisted Fantasy” in the backdrop of their expansive video installations or Jay’s continual choice to perform tracks on which they collaborated. Jay Z has released numerous hit albums — that’s a lot of material to choose from for a concert. So, why did he fall back on five different songs where he doesn’t even have solo billing? Granted, these songs are some of his biggest hits, and playing a concert in Paris without performing “N—– in Paris” would be doing the city a disservice, but it nonetheless felt like a constant tease for a Kanye West guest appearance that never materialized.

Beyoncé is, throughout the show, in her prime. She’s not the girl we met in Destiny’s Child — she is a mature woman and has channeled the confidence and power that goes along with that into a refined and almost perfect performance. The whole show drips with her power and charisma and, as Jay declares in his sign-off, does a pretty good job of confirming her as one of “the greatest entertainers of our time.”

Despite the inevitable accusations that her vocals are lip-synced, as someone who has “witnessed” a Beyoncé lip-sync at the Presidential Inauguration, I’m confident she was singing live for most of the show. From the slow ballads to the powerful chart-toppers like “Drunk in Love,” her vocals throughout the concert are always on point.

On top of that, her outfits are all fabulous, her choreography is technically and visually perfect and she puts on a damn good show of shaking her butt and her hair — sometimes in slow motion. HBOGo does an impressive, if sometimes unnecessarily excessive, job of incorporating slow motion shots into the filming so that you get a real sense of Beyoncé’s authority on stage.

The entire concert does a pretty incredible job at proving Bey’s and Jay’s status as music world royalty. It’s hard to not be impressed by the huge number of elements that make up this show and manage to weave together a story that includes performances of songs from across the span of their careers along with entrancing visuals.

These visuals definitely draw concrete inspiration from a few tangible sources — specifically “Bonnie and Clyde” in 1967 and Tarantino’s “Kill Bill” films. In some instances the references are more overt — a black and white wedding shootout in a church paired with Nancy Sinatra’s “Bang Bang” is too on-point to be an accident. This is indicative of the entire approach to this concert experience. Nothing is a coincidence — everything is there for a reason.

Which brings me to what felt like the real message of the show. After the recent spate of allegations stemming from the elevator incident at the Met Gala and the apparent difference between their two performances, it’s hard not to project preconceived notions about Beyoncé and Jay Z’s relationship and its alleged struggles onto their onstage interactions. They have answers to those who question them that are built into the concert set list itself. Toward the end of the show and the end of the Bonnie and Clyde narrative, Beyoncé announces that forgiveness is a vital part of a successful and happy marriage and a happy life, segueing into a performance of “Halo” and a slideshow of candid photos of the happy couple and the life they have built together. The strength of their relationship is made almost impossible to doubt, but more important than that is the fact they obviously don’t really care what you think or what you say about them.

If this concert makes one thing clear, it’s that they are in control, they are together and they are happy. They’re a ride-or-die duo, and unlike Bonnie and Clyde they don’t seem to be slowing down anytime soon.