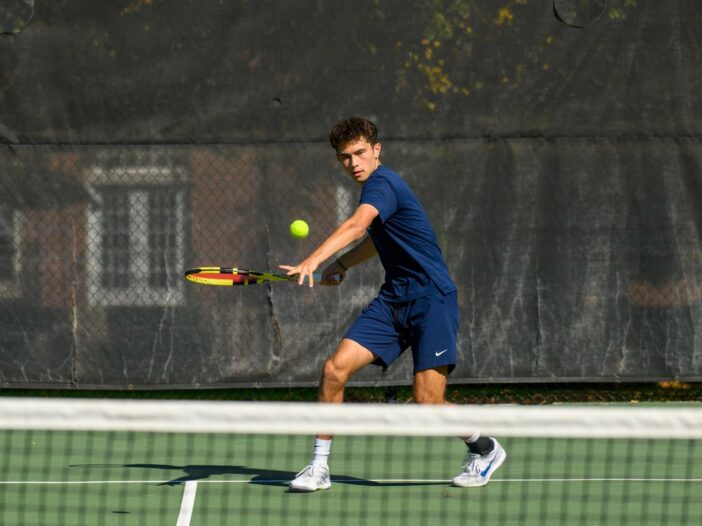 Georgetown University men’s tennis kicked off its spring season with a pair of matches at Old Dominion University in Norfolk, Va., last weekend. Both showdowns ended with a tight 4-3 scoreline, with the Hoyas emerging victorious in their first match against the Presbyterian College Blue Hose but falling short in their second match against host school Old Dominion.

Georgetown’s (1-1) most impressive showing of the weekend was its doubles performance, with the team winning five out of its six doubles sets across both days of competition. Senior Kieran Foster told The Hoya that doubles have been a point of emphasis for the Hoyas since they lost in the first round of the Big East Championship last year in part due to their doubles play. Foster and first-year Zamaan Moledina toppled a Presbyterian College (1-2) pair ranked No. 22 in the nation.

The Hoyas swept all three doubles matches versus the Blue Hose and won two out of the three doubles matches against the Old Dominion Monarchs (2-2) to start both matches with a crucial 1-0 lead. In singles play against Presbyterian on Saturday, Moledina and sophomores Jake Fellows and Advhyte Sharma captured crucial wins to clinch the match and earn four team points.

“My match was tough and there were lots of ups and downs throughout, but I’m glad I was able to pull out the win,” Fellows said.“I think that gave us a lot more security in the overall match so it didn’t have to come down to the last match on court.”

The Hoyas faced a tougher task on Sunday against the Monarchs, one of the tougher teams they will face all year. Old Dominion took an insurmountable 4-1 lead, securing the win despite a hard-fought effort by Georgetown first-year Arthur O’Sullivan and sophomore Akira Morgenstein, who scored two more points for the team with resilient three-set wins to make the final team score 4-3.

The team worked hard despite the loss, according to Head Coach Freddy Mesmer.

“It stings a little to lose that in such a close manner, but our guys fought their tails off and competed until the very last point,” Mesmer said in an interview with The Hoya. “ODU will be inside the top 40 this year for sure so for our team to be that close is a testament to the work they put in this fall and the improvements we’ve made as a whole. Moving into our next matches, I think we just need to continue to improve our discipline and mental toughness.”

Overall, though, Foster said he is happy with Georgetown’s performance.

“I think we surprised ourselves and other teams with how well we competed and played,” Foster told The Hoya. “A lot of us have high ceilings. I’ll be excited to see how we all develop and get closer to these high ceilings as the season goes on.”

The two newest additions to the team’s starting lineup are O’Sullivan and Moledina as third and fourth singles, respectively. Mesmer told The Hoya he recruited the two first-years because of their competitiveness and drive to improve.

The new recruits are already making an immediate impact on the team, Mesmer said.

“Our team is extremely young,” Mesmer said. “I am excited to watch them mature on and off the court. The youth of our team comes with challenges, but also great strengths because there is a sense of fearlessness within the younger guys on this team and that has bled into the rest of our program.”

The pair of matches were Diana Kussainova’s first as the team’s new assistant coach. Kussainova is a former five-star recruit who played collegiate tennis for George Washington University, where she became its first nationally ranked player in over two decades.

According to Mesmer, Kussainova has provided crucial help off the court as well, recently traveling to the Orange Bowl and Winter Nationals to gain experience on the recruiting front.

“Diana Kussainova has been a tremendous addition to our staff,” Mesmer told The Hoya. “She is a great coach on the court and has been a huge help to me with aspects of the job outside the court.”

Up next, the Hoyas will travel to Penn State University, where they will look to carry their momentum against the Nittany Lions on Jan. 22.