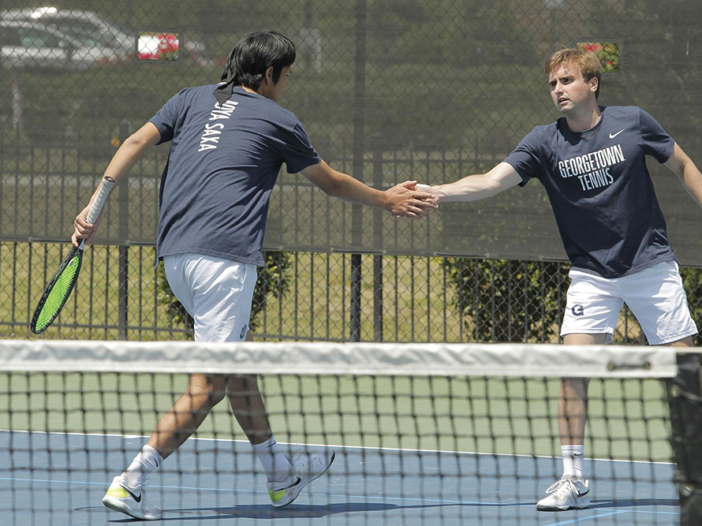 The Georgetown men’s and women’s tennis teams both fell in the first round of the Big East Tournament in Cayce, South Carolina, concluding their already shortened seasons.

The men’s squad finished 2-2 on the season, defeating the Howard University Bisons and Loyola University Maryland Greyhounds and losing to the Villanova University Wildcats in the regular season. The Hoyas faced off against first-seeded DePaul Blue Devils in the first round of the Big East Tournament on April 23, suffering a 4-0 defeat.

The Georgetown women’s tennis team finished 1-2 with a win over Loyola University Maryland and a loss to Villanova during the regular season. Women’s tennis also lost 4-0 to the Marquette Golden Eagles in the Big East Tournament on April 22. Having played all spring without a full roster and forced to default two positions, the Hoyas were at an immediate disadvantage.

Despite the outcome, the Georgetown tennis teams were happy to enjoy the warm South Carolina weather and scout out the other teams in the Big East, according to interim Head Coach Freddy Mesmer.

“This year, we only got to play one Big East Team,” Mesmer said in a phone interview with The Hoya. “It was nice to look at the other teams in our division and see how we stack up. I made an effort to get more conference matches next year to prepare for the Big East Tournament. We are potentially going to play seven to eight conference matches, whereas in the past we would only play two or three.”

It was a difficult season for each Hoya tennis team because of the COVID-19 pandemic; both came together on short notice, struggled to fill their rosters and had many players facing injuries throughout the season. Nonetheless, Georgetown tennis left the season with invaluable experience for next year, according to Mesmer.

“We learned how to close out matches when we’re ahead against weaker opponents,” Mesmer said. “It was also important to gain some experience against better teams in matches where the environment was uncomfortable and see how our players performed facing adversity with their backs against the walls. Some did a great job and others have some work to do.”

The women’s team is losing one senior, Sofie Moenster, who transferred from Rice after her freshman year because she was looking for a better balance between school and tennis. Sofie was unable to compete for the Hoyas in her final season.

Five seniors are graduating from the men’s team, leaving the team without many of its key players for next season. Of the five, only Mark Militzer and Luke Ross played this season for the Hoyas.

“It was crucial having those guys in the roster this season. The duo helped guide the team and impart valuable wisdom to the underclassmen. The three other seniors were all strong players who helped progress the program. They all have great jobs lined up, and I wish the best for them in the future,” said Mesmer.

Georgetown tennis is looking forward to bringing in one of the strongest recruiting classes in history next year, according to Mesmer.

“We recruited two strong girls who will have an immediate impact on the team, which is normally not the case,” Mesmer said. “We will have a young team with great potential, and I am super excited. On the men’s side, we’re getting five freshmen and a graduate transfer from Colgate, Scott Bickel. We are forming one of the best rosters in recent years, and our future looks bright.”