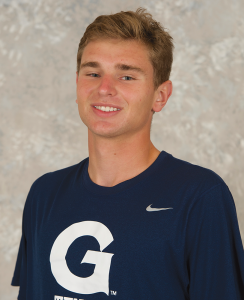 The transition from high school sports to Division I collegiate athletics can be one of adjustment and difficulty, but that has not stopped Georgetown freshmen tennis players Peter Beatty and Marco Lam from performing admirably in their 2014 campaigns thus far.

Both Beatty and Lam found early success in their singles and doubles competitions. Although official season play has not yet begun for Georgetown, the Hoyas have participated in a handful of small tournaments that have put both freshmen to the test.

Head Coach Gordie Ernst has been pleased with the pair’s progress.

“That’s what you’re concerned about — can they come in and play like it’s just a normal tennis match,” Ernst said. “You’re really trying to find guys or girls who thrive on helping others and don’t mind the pressure that that entails.”

Beatty and Lam competed in extremely close matches at the Penn Invitational in late September against seniors on the Cornell squad, exhibiting their level of play and ability to compete under pressure against veterans.

“Playing against the senior from Cornell at the UPenn tournament — I was proud of the way I played, I fought really hard, I didn’t come out on top but for me that was a big match — just knowing I can compete at that level,” Beatty said.

Lam played against Cornell senior Sam Fleck in the Penn Invitational, ending in a three-set Georgetown loss. The 7-6, 6-4, 6-4 result came despite the freshman’s first set win, as Lam was unfazed by Fleck’s experience and talent level throughout the match.

“I’ve been playing around the world internationally so it doesn’t really make a difference in terms of experience,” Lam, a Hong Kong native, said. “Tennis is a sport about the mind so I think it doesn’t really matter as long as you compete well on the court.”

Lam’s experience competing with international tennis players is a vital reason behind his easy transition to high-level collegiate tennis.

“Already he understands when we go to play what’s on the line,” Ernst said of Lam. “That’s a guy that’s played against some of the best junior tennis players in the world, so what’s great about Marco is his command of the game and his ability. His talent level is very high.”

Matches against the University of the District of Columbia at the Sept. 19 Georgetown Classic marked Lam and Beatty’s Hoya debuts, and neither player failed to impress. Lam paired up with junior Danny Khanin in doubles to win 8-3, while Beatty played doubles with senior co-captain Alex Tropiano to win 8-2. Lam and Beatty also won their individual singles matches in straight sets.

While Ernst points to Lam’s international experience as one of his most impressive qualities, Ernst says Beatty’s competitive nature is what sets him apart from other freshmen athletes.

“Peter is just one of my most impressive freshmen to date in terms of so many things,” Ernst said. “He thrives on this competition and he gets the college atmosphere. … He understands Division I collegiate sports. He gets that you lay it on the line for your teammates and his maturity, his work ethic and his focus in practice is all second to none.”

Also key to the freshmen’s success has been the mentorship and advice from older players on the team. Beatty’s current doubles partner, Tropiano, has been a particularly strong source of assistance.

“[Tropiano] has really helped me with doubles play, and all the seniors are right there mentoring you,” Beatty said.

Ernst added that senior co-captain Shane Korber has also been a mentor for the younger players.

“You have Shane and Alex who have played almost every single match for us — singles, doubles or both — who have just been through the battles and can help the freshmen in that regard,” Ernst said.

Despite their wins, Beatty and Lam are still expected to improve as the season progresses. Beatty hopes to continue to adjust his game to play smarter baseline tennis, while Lam’s personal goal is to improve his serve and speed. This desire to learn is indicative of the two players’ enthusiasm on the court, in practice and in match play.

“They’re working on things they need to work on — a lot of freshmen aren’t like that,” Ernst said. “They come in and they get kind of stubborn and they’ve been playing a certain way for awhile and they resist change, but these guys just want to get better.”

Kickoff in Chicago will be at 1 p.m.