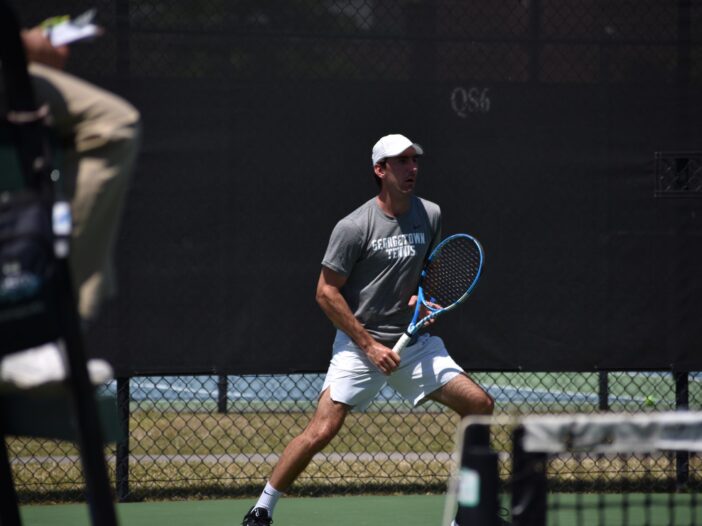 Georgetown University men’s and women’s tennis concluded their seasons with quarterfinal losses in the 2022 Big East Championship in Cayce, South Carolina April 21-22. The men’s team capped off the spring with a 7-12 record, while the women’s squad ended with a 9-13 record, which included a win in the first round of the conference tournament.

The No. 5 Georgetown men’s tennis team lost a thrilling match marked by nail-biting sets to No. 4 Butler. After capturing a win in the third doubles positions and dropping the first doubles, the men’s doubles point came down to the second doubles match. First-year Akira Morgenstern and senior Andrew Rozanov came up short, ultimately losing in a tiebreak 7-6 (6). The doubles point proved crucial, as those two points in the tiebreak could have changed the outcome of the match.

Georgetown tied the match at 1-1 after first-year Adhvyte Sharma steamrolled past his opponent, winning 6-3, 6-0. However, the Hoyas lost decisively in first and second singles and quickly found themselves trailing Butler 3-1. The team dug deep, though, and clawed their way back. Morgenstern and Georgetown graduate transfer Scott Bickel outplayed their opponents in a pair of two-hour battles to even the match at 3-3. Both players fought back from a set down to claim crucial third-set victories.

Georgetown tennis Head Coach Freddy Mesmer was not surprised by the persistence his players showed on the court.

“This was the story of our season. Backs constantly against the wall and able to compete and fight back over and over,” Mesmer said in an interview with The Hoya.

Ultimately, the match came down to third singles. Georgetown first-year Jake Fellows won the opening set and lost the second. Although he found himself trailing 4-1 in the third, Fellows managed to win two consecutive games and narrow the gap to 4-3. However, he lost the set 6-3, sending Butler to the semifinals.

The No. 6 Hoyas women’s tennis team started their tournament bid in the round of 16 against the Providence Friars, as there were 11 teams in the conference. Georgetown dominated Providence, advancing to the next round in just 108 minutes. After capturing the doubles point, the Hoyas clinched the match with three quick singles wins at first, fifth and sixth positions, losing seven games combined in the three matches.

Georgetown had a tougher time in the quarterfinals against the No. 3 Xavier Musketeers. Xavier captured the doubles point and carried the momentum into singles, losing just one game in the second and third singles positions. Hoyas sophomore Avantika Willy pulled off a big 7-5, 6-4 win at first singles, but the match ended after the Musketeers captured a straight-sets win at fifth singles. Georgetown junior Agata Mikos was tied with Xavier’s Anna Roggenburk when the round concluded.

Coach Mesmer was optimistic about the performance.

“For our women’s team to go and dominate our first round against Providence and then compete the way they did against Xavier was incredible,” Mesmer told The Hoya. “If you had told me two months ago, when we were 0-9 to start the year, that we would have match points for the doubles point against Xavier, win at first singles and be competitive in the other matches, I wouldn’t have believed you.”

Coach Mesmer is looking forward to next year for both teams. For the men’s team, he is excited to bring in two big-time recruits, Zamaan Moledina and Arthur O’Sullivan. Moledina is a five-star recruit from Delray Beach while O’Sullivan, hailing from Ireland, is ranked No. 238 on the International Tennis Federation junior circuit.

While speaking about the women’s team’s prospects, Mesmer also highlighted the incoming commits.

“I am really looking forward to our three recruits for next year who will come in and be able to impact things immediately,” Mesmer told The Hoya. “We don’t lose any starters, so our depth will keep improving and will be great for our program moving forward.”