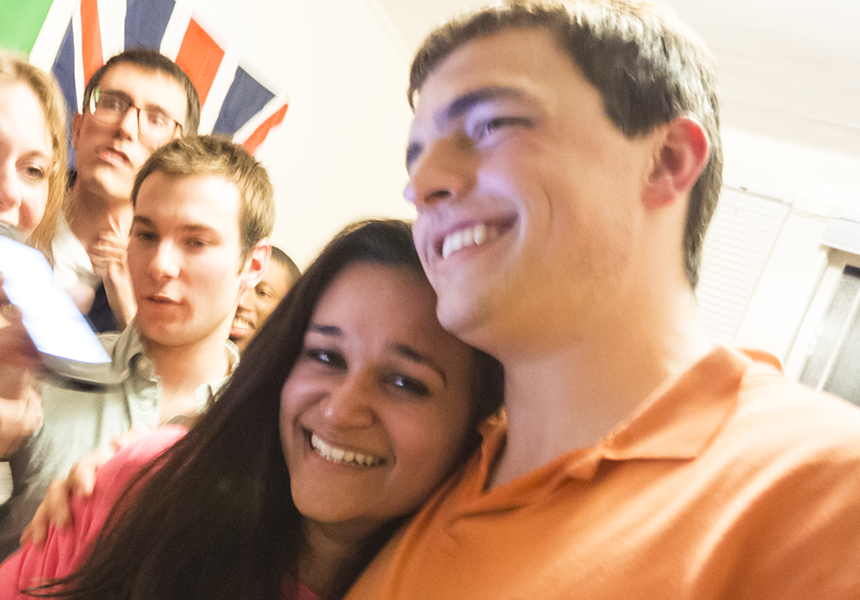 Trevor Tezel (SFS ’15) and Omika Jikaria (SFS ’15) won the GUSA executive election Thursday night, bringing in 35.23 percent in the first round of instant runoff voting and 50.19 percent of the vote in the third and final round.

A total of 3,517 ballots were cast in the election, lower than last year’s record turnout of 3,733 voters.

The results of the election, which were released round by round five minutes apart on Twitter by the Georgetown University Student Association Election Commission between 12:50 a.m. and 1:01 a.m. Friday, mirrored a poll that The Hoya conducted last Tuesday, in which Tezel and Jikaria led Singer and Silkman 26.6 percent to 18.8 percent.

Tezel and Jikaria, running on the campaign slogan “Connect to Georgetown,” primarily advocated for student rights, including free speech, improved access to benefits for unrecognized student groups, reforms to the Code of Student Conduct and improved resources for survivors of sexual assault. Their platform also called for the creation of a multicultural council, which would allow different cultural groups to communicate and determine how best to advocate for particular initiatives on campus — a proposal that attracted attention and criticism during the campaign.

Tezel and Jikaria pledged to begin work immediately, promising the immediate creation of the transfer and multicultural councils in addition to policy changes.

“We’re going to get right to work on some of the policy reforms that we stressed, like access to benefits, free speech reform, and we’re going to start doing office hours right away,” Jikaria said.

Jikaria was the only female candidate in this year’s contest; however, she said that it was the issues that her campaign focused on rather than her ticket’s diversity that contributed to her and Tezel’s victory.

“I’m proud to be the only woman in the race, but I’d like to think that the race focused on issues and not around gender, but at the same time, I do think that some girls saw me and definitely have someone to look up to now,” she said.

Singer and Silkman finished in second place, with 1,055 votes in the first round and a third-round tally of 1,535 votes after redistribution. Singer has extensive experience in GUSA as a former senator who currently serves as outgoing GUSA President Nate Tisa’s (SFS ’14) chief of staff. His running mate, Silkman, gained prominence on campus for his roles in New Student Orientation, Relay for Life and the “What’s a Hoya?” program.

Singer commended Tezel and Jikaria’s campaign, and he expressed appreciation for his own campaign staff and supporters. He described this year’s election as policy-based, rather than personality-based.

“This year, we saw a real difference in ideas. It’s a positive thing. Moving forward, hopefully, it will be even less about personalities,” Singer said. “We put out our ideas and they put out their ideas, and Trevor and Omika’s were taken.”

Singer said he would examine an opportunity to be involved in the new executive, if offered, but expressed a commitment to continuing student advocacy regardless.

Tezel and Jikaria had cross-endorsed the ticket of Ben Weiss (COL ’15) and Sam Greco (SFS ’15), who finished in third place, receiving 614 first-round votes and 683 second-round votes before being eliminated.

“From the bottom of my heart, I couldn’t be happier. This school’s in safe hands with Trevor,” Weiss said. “He’s put a tremendous team together, and I look forward to doing anything I possibly can to help.”

Weiss expressed surprise at the outcome for Thomas Lloyd (SFS ’15) and Jimmy Ramirez (COL ’15), who came in fourth with 561 votes in the first round before being eliminated from instant runoff voting, and slight dissatisfaction with his own ticket’s tally.

“I was marginally surprised at how low Thomas and Jimmy did, and a little disappointed at our numbers, but I think it pretty much reflected the general consensus,” he said.

Lloyd, who also congratulated the executive-elect, indicated that he wished he had decided to run earlier, having committed himself to the campaign only a few weeks ago. His campaign was cross-endorsed by Singer and Silkman, and he received the endorsements of the editorial boards of both The Hoya and the Voice.

“I would have jumped in earlier and gotten over my stage fright and assembled a larger team earlier. I wouldn’t have changed my platform or running mate or anything my campaign did,” Lloyd said. “I think that obviously being eliminated in the first round is just disappointing, but we got those results surrounded by supporters knowing that we had significant endorsements.”

Moving forward, Lloyd said he would remain involved with GU Pride in a role yet to be determined after his term as president ends and continue to advocate for free speech and access to benefits issues.

Per custom, Tisa called Tezel to inform him of his victory just before the Election Commission released the final round of results.

“He was thrilled. I told him ‘Congratulations, Mr. President-Elect.’ There was a lot of celebration on the other side of the line, as there should be,” Tisa said. “Trevor and Omika have a lot of great ideas, which I hope they have the time to implement. We’re going to work with them over the next month to give them the tools.”

Tisa, who along with Vice President Adam Ramadan (SFS ’14) chose not to endorse a ticket, complimented each campaign and encouraged all the candidates to continue building on their campaign initiatives.

“All the candidates put themselves out there, had great ideas and are clearly dedicated to Georgetown. We’re hoping that the other candidates don’t stop working to make Georgetown better,” he said. Tezel and Jikaria, who assume their roles after spring break, will be inaugurated in March.

“They are the best, most amazing people that I could have ever asked for. I never could have imagined when I stepped foot at Georgetown that I would have had as smart, as intelligent and as knowledgeable a campaign team as I did tonight,” he said.