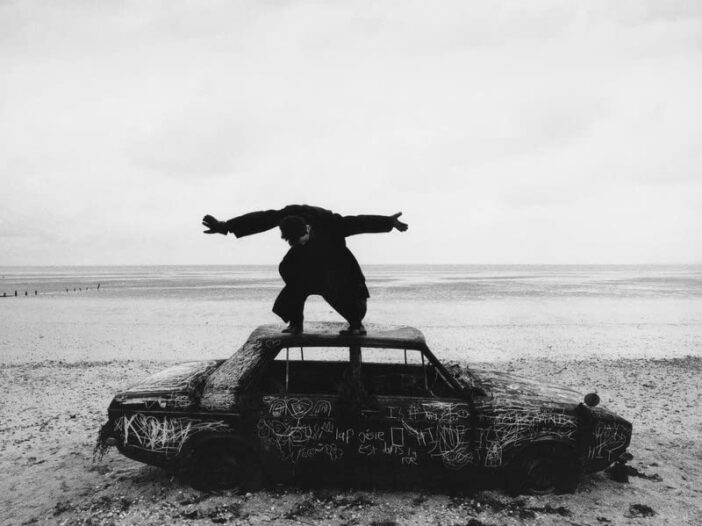 A man in a long coat, dancing wildly on top of a wrecked, graffitied car on a dirty beach — caught still forever, photographed in black and white.

The cover of The 1975’s fifth studio album “Being Funny in a Foreign Language” expertly captures the essence of the album without any direct reference to its contents. The album is cynical and rife with heartbreak, yet at times even — as its title would suggest — funny. It is a true return to form in a record that takes the band’s penchant for philosophizing and social commentary and turns it into an intimate look at their core.

“Being Funny in a Foreign Language” is The 1975’s newest album since their inception in 2002. It is a remarkably short 43 minutes when compared to their 2020 album, “Notes on a Conditional Form,” which was 80 minutes long.

Known for their consistent use of synths, nearly unintelligible lyrics, and references to extremely timely cultural moments, The 1975 has been mired in controversy surrounding lead singer and songwriter, Matty Healy. He has come under fire for pretending to blow himself up for a music video and posting insensitive tweets promoting a song from the band using the Black Lives Matter movement; both incidents are referenced in the album.

For Healy, these mistakes are what make him, well, Healy.

With the first track on the new album, traditionally titled “The 1975” like the opening tracks of all their other records, the band harkens to their prototypical formula by listing current trends of drug addiction and anxiety, remarking on the difficulty of growing up in a world on the brink of implosion and making an appeal to the postmodern lens. The rest of the album follows these broad themes, using the group’s musings about modern culture as a backdrop for the simple story of the end of a relationship.

Healy spends the majority of the album wallowing in heartbreak — likely referring to his breakup with fellow musician FKA twigs in June 2022, who he dated for three years. Even the songs that seemingly detail their happy moments, like “All I Need to Hear” and “Human Too,” are interspersed with red flags and signs of conflict that evolve into despondent, desperate heartbreak.

This narrative of heartbreak is absolutely obvious in the instrumentals of the album. The first half of “Being Funny in a Foreign Language” is consistently upbeat, with light and airy instrumentation. Every song on the album contains The 1975’s signature repetitive guitar, which forms each track’s beat.

The tracks are saved from musical dullness by the introduction of new, melodic elements throughout — for example, a piano and some brass — that add layers to the sonics while maintaining the steady rhythm. Added quirks are found in the random noises peppered throughout, like quiet shouts and whispers, a cymbal or a chime.

The division of the album is marked by the song “I’m in Love with You,” which keeps itself simple: the message of the song is the same as the one conveyed by the title. The significance of this sentiment is revealed in the following song, “All I Need to Hear,” in which Healy begs, “tell me you love me.” The sense of loss, though hinted at earlier, is now undeniable.

Despite this heartbreak — which Healy has not recovered from by the end of the album — love is to be found in other places.

Notably, “Wintering,” a quasi-Christmas song, can be described only as adorable. There is a palpable excitement in going home for the holidays as Healy teases his family in a clearly loving way. Love, on this record, is not just romantic, but it is found in all aspects of life.

Healy generalizes this point early on, describing the human condition as one in which flawed, detestable individuals, including abhorrent killers, are just looking for love. Later, in “When We Are Together,” he addresses the audience directly and apologizes for his cancellation, pleading with us to recognize his humanity. He begs for compassion for himself and for everyone, and he promises to reciprocate.

Nonetheless, there are some lines on this album that are so ridiculous and jarring that any listener tempted to tune out Healy’s mumbly lyrics will listen. These include lines like “You ask about the cows / Wearin’ my sweater” and “John’s obsessed with fat ass and he’s ten years old.” Though some may find these perplexing lyrics distracting, they are also small delights that make these songs distinct and memorable.

Though “Being Funny in a Foreign Language,” with all its iconic idiosyncrasies, will not convert anyone who previously hated The 1975 into a fan, it is sure to entertain, inspire and induce a tear or two in those who already appreciate the band’s musical stylings. It paints a cohesive narrative that sits neatly within the band’s catalog, and yet it marks a turn towards simplicity, towards the self (in a humble way) and towards a sincerity that, though verging on naive, drives home the message that love conquers all.