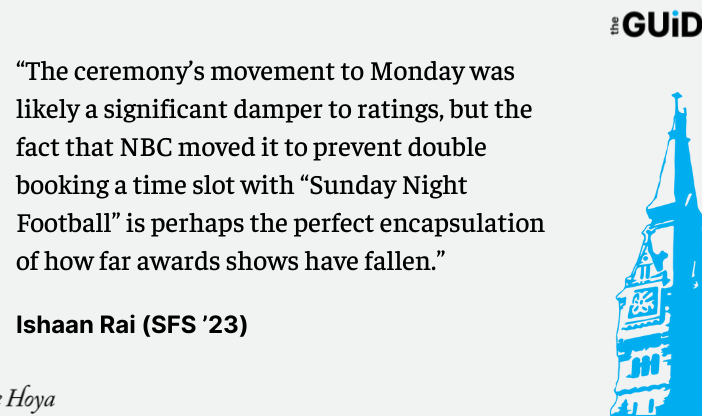 The 2022 Primetime Emmy Awards occurred Sept. 12 in Los Angeles’ Microsoft Theater without much fanfare. After a resurgence in 2021, ratings fell to an all-time low of an averaged 5.9 million viewers, which raises familiar questions regarding award shows’ relevance and necessity.

To be fair, the ceremony’s movement to Monday was likely a significant damper to ratings, but the fact that NBC moved it to prevent double booking a time slot with “Sunday Night Football” is perhaps the perfect encapsulation of how far awards shows have fallen.

The ceremony was forgettable at best; host Kenan Thompson delivered a few solid jokes, notably one at the expense of Leonardo DiCaprio’s ever-mocked dating life. The night began with a bizarre interpretive dance routine to remixes of classic show themes like “Friends” and “Game of Thrones.”

Yet the themes were layered with so much electronic dubstep to the point of being unrecognizable, setting the tone for a night of confusion. The crowd was low-energy, and the general production, including the merciless speech timer that multiple winners complained about while on stage, gave the sense of going through the motions, as if the producers of the Emmys could see the writing on the wall for the ceremony’s future.

But the best part of the night, as always, was the awards (full list here), and for dedicated TV watchers, the awardees largely hit the mark. The hit HBO series “Succession” won the award for outstanding drama series, while Apple TV’s “Ted Lasso” won its second award for outstanding comedy series. HBO also scored the award for outstanding limited series with “The White Lotus,” clearly displaying the utter domination of streaming services in both the commercial and critical realm — Jennifer Coolidge dancing to the “send off” music after winning outstanding supporting actress for the show also provided a particularly potent rebuke of the ceremony’s production.

One of the lone bright spots for traditional networks was also the acting category, as Sheryl Lee Ralph won the award for outstanding supporting actress in a comedy series for her role in the new ABC show “Abbott Elementary.” For the same show, Quinta Brunson, the first Black woman nominated in three comedy categories in a single year, nabbed an Emmy for outstanding writing for a comedy series. However, when receiving the award, she had to literally step over Jimmy Kimmel for her award, causing online controversy that Kimmel was not giving Brunson proper respect.

Other noteworthy awards included Jason Sudeikis winning his second Emmy for outstanding lead actor in a comedy series for “Ted Lasso” and Jean Smart winning her second Emmy for HBO’s “Hacks.” Surprisingly, the first season of “Lizzo’s Watch Out for the Big Grrrls” won the award for outstanding competition series, a category normally dominated by mainstays like “RuPaul’s Drag Race” and “The Voice.”

In total wins, “The White Lotus” led the pack with 10, followed by “Euphoria” and “Squid Game” with six each. The rise of “Squid Game” in this year’s Emmys is a significant breakthrough, as the Emmys had never before nominated a non-English language show for any major award, let alone six. The success of “Squid Game” could indicate further recognition of non-English shows in the future, and perhaps opening up to the world could help offset the ceremony’s ratings woes.

Finally, major snubs were generally few, except for the baffling losing streak of acclaimed show “Better Call Saul,” which has been nominated for 46 total Emmy awards throughout its six-season run, including four this year, and has lost all of them. Sometimes shows are just cursed.

Overall, this year’s Primetime Emmys mostly offered more of the same. It’s clear the same will not be enough to prevent the slow death of the award show format and that drastic changes, whatever they might be, will be needed. It would be a shame if awards shows were to disappear altogether, as they still provide a fun watch and elite allure, especially if they are able to cut down their length and remain under three hours.

Hopefully, the Emmys — along with their other award show companions — can get their act together.