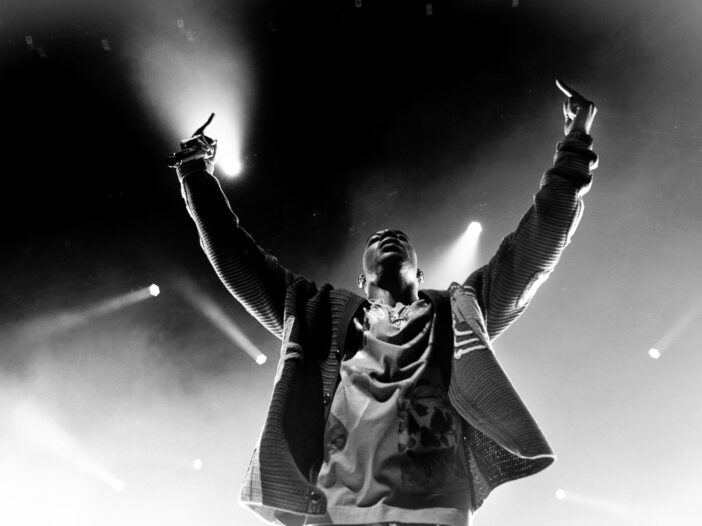 When Kid Cudi announced his plans to release the long-anticipated compilation album “The Boy Who Flew to the Moon Vol. 1” on July 5, fans expected an incredible tour. Cudi’s status as a pillar of rap music has made him a household name — one both college students and middle-aged professionals can recognize — but that was not enough to ensure a stellar concert.

Cudi performed for Washington, D.C. residents at Capital One Arena on Sept. 8 with Denzel Curry and 070 Shake. Though Kid Cudi has been performing for many years, his target audience remains within the collegiate atmosphere, with students from Georgetown University, American University, Catholic University and George Washington University crowding the Metro to the arena.

It was immediately evident that concert-goers used Kid Cudi’s famous intergalactic energy as an inspiration for their outfits. With bedazzled tights, colored sunglasses, and vibrant pattern combinations, college students donned their best clothes for the festival.

Cudi has established himself as a party music artist, and his setlist reflected this image. He started the show strongly with “Down & Out” and “Tequila Shots,” establishing the rest of the night as one big party as opposed to a standard concert.

Though Cudi’s music was designed to be listened to at full volume, as an experience and vibe changer, this tour did not deliver. Capital One Arena clearly missed the memo and forgot to update their acoustic design, causing listeners in the back to struggle to hear Cudi’s voice over the monster bass and deafening instrumentals.

Regardless of the volume, fans from the pit to the nosebleeds were pulled to their feet by Cudi’s performance — not for the songs but for the mesmerizing light show.

Cudi’s more upbeat songs, fan favorites like “Memories” and “Pursuit of Happiness,” were accompanied by strobing red and blue lights, which seemed cool until they shined all the way up into the eyes of those stuck in the nosebleeds.

The set was brilliantly designed, with fog covering the stage and moon rocks placed sporadically, transforming the arena to showcase Cudi himself: The Boy Who Flew to the Moon.

Though Kid Cudi curated his image around party music, he has been open about his struggles with mental health throughout his career and incorporated some of his more serious songs into his setlist. When the first few notes of “Ghost!”, a song that discusses Cudi’s struggle with suicidal thoughts, began to play, a shift in stage set-up transformed the mood of the evening into a more moody yet thoughtful one.

Fans were constantly directed to focus on Kid Cudi at center stage, as he stood illuminated by a single white spotlight. Moments like these made the show feel authentic, especially because this may be one of Cudi’s last tours before he retires.

Fans experienced a whirlwind of emotions throughout the show, but ultimately, the overall setlist was lackluster. With a repertoire of only 14 songs, from which mega-hit “Day ‘N’ Nite” was jarringly missing, Cudi fans were given a slight but still unreachable view of the man on the moon.