With Japan, as with any relationship, I fear rejection. It is no question that this culture is my muse, and conversely, Japan seems to have sustained a long-standing fascination with Americans as well. The Japanese have unyieldingly accommodated a flood of English words into their vocabulary, reciprocated the foreign interest in Japan with an outward fascination with the West and embraced internationalization as if it were an idea of their own. What could I possibly be afraid of?

Nothing, as long as I keep my mouth shut about being trans*.

For the most part, compromise between American and Japanese worldviews is enlightening, and I relish the reward of perspective from resolving cultural discrepancies. The LGBT issue, however, remains clear and prevalent.

First contact occurred during one of my first weekends in Tokyo, while chatting up a strapping young man at a popular club in Shibuya. He’sstudied in Australia and he speaks wonderful English. So far, I’m impressed.

He asks where I live. ”A dorm, in Setagaya,” I respond. I joke about its strict gender separation, how males and females aren’t allowed to cook together, eat together or even be seen in each other’s halls.

He smirks. “So I couldn’t come in? What if I said I was gay, would they let me in your wing then?”

Concurrently, he manages to hit on me, and tread across a line he doesn’t seem to know I have. “Not exactly,” I say, forcing a nervous laugh.

I go numb. As I desperately steel my countenance — lest I give myself away — his mockery metastasizes. Feigning innocence, I probe his worldview. He proceeds to make short work of my kind, and within a minute I gather that being gay apparently equates to being transgender, that they are both a sickness and that they are considered abnormal conditions worthy of ridicule.

Before long, he stops, noticing my glazed eyes. Silence. I promptly excuse myself.

Weeks pass, and I accredit my nightmare to misfortune. Refusing to let one opinion represent the whole of Japanese society, my wound heals, and I discard the memory. Then last week, it surfaced again.

I am less vulnerable this time, with four Americans friends to the one Japanese acquaintance. Among a conversation about career prospects, I casually mention I might like working for LGBT equality. The topic sparks conversation among us five Americans, yet the last of us remains quiet.

“Wait,” he finally interjects, “I’m not sure I understand.”

As if common knowledge, he guiltlessly recites the very opinions that shook my core the first time. My friends gingerly attempt a search for common ground, but the rift between cultures is already agape.

Even now, I cannot easily settle myself with these experiences. My values regarding the rights of gender and sexual minorities are steadfast, cemented to my identity. I resist the temptation to blame those two acquaintances, although I am convinced they are wrong, because they are products of a culture whose worldview commands harsh dismissal of an ever-growing plurality.

But it is naive of me to forget that, until recently, the American worldview was not so different. Japan can change too, but as a collectivist culture, it will require pressure from within, and from without.

For as long as I can remember, I have needed Japan, for it has been my medium of learning how to understand the world and how to change the way I think. Now, I begin realize that in the same ways, Japan might need me too. 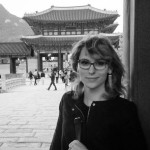 Celeste Chisholm is a rising senior in the College. An American Hoya in Japan appears every other Thursday at thehoya.com