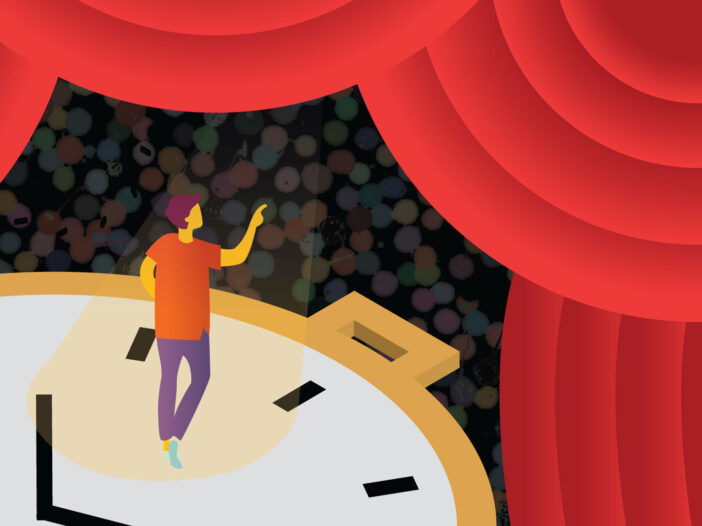 Every April, Georgetown University’s Mask and Bauble Dramatic Society, known for producing classic plays like “Much Ado About Nothing” and musicals like “Into the Woods,” gives its students the opportunity to put their creativity to the test through the Donn B. Murphy One-Acts Festival (DBMOAF).

Taking place April 7 and 8, April 10 and April 21 to 23 this year, the annual student-written one-act festival, in which student playwrights compete to have their shows displayed, was founded in dedication to Donn B. Murphy, who emphasized the importance of student-written works during his time as a Georgetown University teacher and director. The dedication gained new meaning this year, as Murphy passed away April 3.

Held in Poulton Hall, the festival featured three student-written shows, ranging from 15 minutes to 1 hour and 30 minutes: “Duty Free As A Way of Coping,” “Huelga!,” and “Grand Courses.” Put on with the support of Mask and Bauble, DBMOAF has provided a home for decades of homegrown Georgetown talent and for those who work to make the festival a possibility every year.

Each of the three plays featured in DMBOAF has distinct lessons, but they also have overlapping themes, which the creators hope will leave an imprint on the audience.

According to Anjali Britto (SFS ’22), “Duty Free” does not have a linear plot. Rather, it focuses on an international student who is stuck in the United States working at an airport during the COVID-19 pandemic. The student feels like she is in limbo, watching other people travel while she is stuck.

When watching her own show, Britto said she found herself reflecting on how she has changed throughout the pandemic compared to her pre-pandemic self. For her, her play reminds of the strange frozenness of time during lockdown in her home in India.

“Time is so weird. Like, on many levels. On one level, it’s like every day seems kind of like the same, you know, you’re not really doing anything at all. It’s just kind of Groundhog Day, every day,” Britto said.

For Ashanee Kottage (SFS ’22), an actor in “Duty Free,” audiences will understand the multifaceted themes of the play that reflect the intricate emotions of the pandemic.

“I hope audiences feel the hope it suggests but also feel the trauma and crises the pandemic caused and continues to cause,” Kottage told The Hoya. “Shop Girl is losing her mind, but she’s staying strong.”

Meanwhile, “Huelga!” tells the story of the work done by Mexican American activists in 1970s Houston, Texas, to fight for educational equity. Sabrina Perez (COL ’24), who plays an outspoken activist named Yolanda López, wanted the audience to learn the history of the movement.

“The fact that I didn’t even know about the movement before I read the script was just so sad — sad that such an important and inspiring movement is overlooked in so many history courses,” Perez said. “I hope the audience can see the fight of the Mexican American activists in Houston and how much of an impact they were able to make by not just giving up!”

“Grand Courses” focuses on the individual as it follows a teenage boy who is struggling in his life and has trouble opening up to others. With infused comedy elements, “Grand Courses” teaches the audience how taxing bottling up your feelings can be.

As the producer of all three of the shows, Abby Hames (COL ’24) did not originally look for a connecting theme for the festival but found one as she worked with each cast and crew.

“For me personally, the connecting theme was coming of age and finding strength in difficulties, despite each show having its own very different difficulty,” said Hames, “whether that be the ‘Huelga!’ schools and its political discourse, or ‘Grand Courses’ and growing up in a new generation, or even the absurdist ‘Duty Free’ and the feeling of being left behind.”

Ultimately, Mask and Bauble’s one-acts festival speaks to Georgetown students’ ability to persevere and pursue what they love. For Kottage, despite all the production complications, the finished product is worth the journey.

“That is what DBMOAF is all about: our work, written by, designed by, performed by students,” Kottage said.

Despite being only about 15 minutes to an hour each, these shows took weeks of effort to make it to the stage.

For Hames, the most difficult part of the process is the brief nature of each play.

“I think the challenging part was making a story that is interesting for one act because there’s no break in between. So the biggest thing for us was making the story engaging from a personal standpoint,” Hames said.

Similarly, student playwrights made an effort to make their stories relatable to their audiences while still maintaining their authentic voices. Searching for inspiration for her script, Britto drew from her own experiences as an international student navigating airport travel to put together her one-act play “Duty Free.”

“When COVID happened in 2020, a friend and I, the minute we got that email, we’re making plans to leave the country and go back home. That kind of craziness was not something that I’ve experienced before,” Britto said. “Hearing about borders closing, all of that got me thinking about ‘what if someone gets stuck between two borders, like they don’t have any work, they can’t go back, they can’t keep going?’”

“Duty Free” is a 15-minute stream-of-consciousness play that centers around the main character’s internal monologue while she is stranded at the airport.

“The way I like to talk about it is like, it’s a play about nothing really, because nothing really happens. Just a lot of thoughts,” Britto said.

Unexpected issues arose in making props for “Duty Free.” As performance day neared, Kottage realized there were no props for the show. Kottage had to work through the night alongside the production team to build perfume boxes for the play by hand.

“A small group of the directing and production staff and myself stayed up all night measuring dimensions of perfume boxes,” Kottage said in an interview with The Hoya.

Obstacles also appeared in the casting process, specifically in creating an accurate makeup of inclusion close to source material. For instance, “Huelga!” originally called for a large Latinx cast, but the short time frame for production limited the time available for auditions.

With less time to call back potential actors, fewer Latinx actors were able to participate as Maggie Cammaroto (COL ’22), the director of “Huelga!,” had hoped. Adjusting to the circumstances, Cammaroto had to slightly alter the plans for the 45-minute musical.

“Because the original show called for a large group of Latinx performers, we eventually had to rewrite the script just because we didn’t get the Latinx actor participation that we needed to fill out those roles,” Cammaroto said. “We rewrote it and had it done two weeks before opening, so we had two weeks to redo all the choreography and learn new music and block the whole show.”

With a production team of students, piecing together the different elements of the show became an entirely collaborative experience. In producing “Huelga!,” musically inclined students focused on composing the soundtrack while experienced writers crafted the lyrics, according to Cammaroto.

The final one act of the festival, “Grand Courses,” was a comedy drama telling the story of a struggling young man working at a mini golf course. The script included long monologues that challenged the actors, according to Perez, who acted in both “Huelga!” and “Grand Courses.”

Memorizing lines in the monologue-heavy play was especially difficult for the actors since they had limited time to learn them, Perez said.

“It was a lot of pressure to have to learn in a short amount of time,” Perez said. “It actually didn’t feel like too short a process because of how committed everybody was. I love all the shows that I’m involved in, so that also motivates me to learn my lines.”

Rounding out Season 170 of Mask and Bauble’s production slate, this year’s DBMOAF was a crowning experience to the theater careers of many Georgetown students.

Throughout her time as an undergraduate student, Cammaroto has participated in 10 productions across campus, including with Mask and Bauble, Nomadic Theater and the Georgetown Department of Performing Arts as an actor and director.

Throughout these productions, Cammaroto said she found a home in the theater community at Georgetown, and especially during this year’s DBMOAF production.

“It is all about the people you are working with because you really have to trust people, trust their intelligence and be able to work with other people really well,” Cammaroto told The Hoya. “I think because of that, because we are working so closely with one another, we are all really close.”

Like those onstage, those who work tirelessly behind the scenes to put on theater productions share similar joys to the sense of community that DBMOAF brings.

For Hames, the theater serves as an escape from academics. Hames has found that Georgetown’s close-knit theater community is reflective of the students’ creativity outside of the classroom.

“I think our theater scene proves that we are not just an academic space because we are focusing on the performances and the production. It is not like you go to class and you have homework,”  Hames said in an interview with The Hoya. “I am coming from a STEM perspective, so I would say it’s a nice break in that you do not have to play by the rules. There aren’t really rules to being creative.”

Perez was excited to be part of something that was written by a fellow student.

“Being able to highlight student-written work and put that on is so unique and something that I care a lot about. It gives student writers a platform to see their shows come to life that may not have ever,” Perez said.

Through this sense of community, these students are able to face the tough challenges of what comes ahead — all while creating lifelong bonds with their castmates.