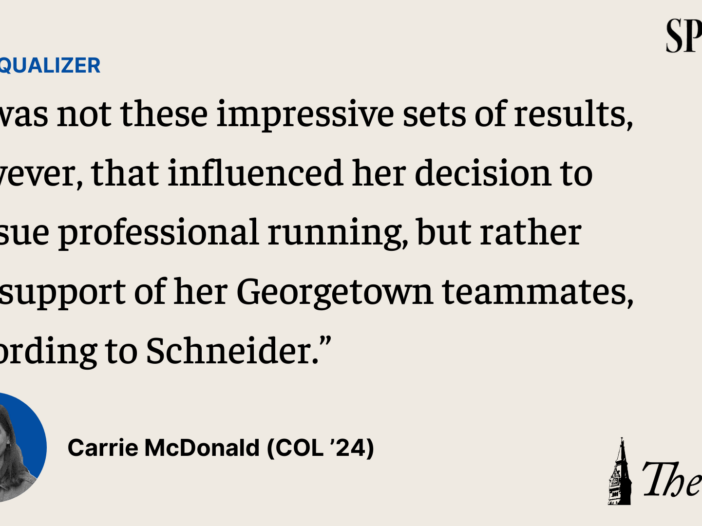 From the lifelong friends she met to her decision to run professionally, Tokyo Olympian and long-distance runner Rachel Schneider’s (NHS ’13, GRD ’15) time at Georgetown was instrumental in finding her calling, leading her to the world’s highest stage of athletics.

Although she won the New England Championship in both 800m and 1600m events in high school, Schneider had assumed running would not play such a prominent role in her life at the Hilltop and beyond.

“I don’t ever think I saw myself becoming a professional runner,” Schneider said in a Zoom interview with The Hoya. “I was kind of honored to be recruited by Georgetown because they’re one of the best teams in the country.”

While competing for Georgetown’s track and cross-country team from 2010 to 2014, Schneider excelled across the middle-distance events, winning a Big East championship and earning nine All-American honors.

It was not these impressive sets of results, however, that influenced her decision to pursue professional running, but rather the support of her Georgetown teammates, according to Schneider.

“My teammates elevated not only the ability that I had on the track but also just the way I saw myself,” Schneider said. “Being able to train with those women and being trained by those coaches, I all of a sudden started to really believe that I could continue to run at an elite level after college and eventually at the Olympics. It helped me grow in my mindset. I have no idea if I would have known that professional running was a possibility if I had gone to another school.”

Schneider, who asked for new books in lieu of creating a registry when getting married, said continuing her love of learning after graduating Georgetown has played a pivotal role in coping with the mental challenges that come with running.

“I love learning,” Schneider said. “I found ways to learn on my own, mainly through reading and listening to podcasts. That has really just helped center me in a lot of ways and that has helped so much with my mental growth and mindset in the sport of running.”

This attitude proved invaluable during the COVID-19 pandemic, during which Schneider faced the myriad uncertainties involved with the postponement of the 2020 Tokyo Olympics and the inability to race at track meets.

“I knew that the only thing I could really do is focus on the things I could control,” Schneider said. “I pretty quickly shifted into using that time to work on some of my weaknesses and find ways to become a stronger athlete and to grow from the big adversity that the pandemic was presenting. I just saw it as an opportunity to strengthen some areas that I thought I could improve on and just stay present and open-minded.”

Schneider’s tenacious and resilient outlook translated to success on the track. After failing to qualify for the 2016 Rio Olympics in the 1500m, she shifted her focus to the 5K event. According to Schneider, she is most proud of her performance at the 2020 U.S. Olympic Trials, where she qualified for the 5K with a third-place finish. Although missing out on qualification for the 10K, Schneider still finished in an impressive fifth place in only her second attempt at a 10K on the track.

“Qualifying for the Olympics was just this really special pinnacle moment of all this hard work, dedication, and growth coming together,” Schneider said. “It was a big dream coming true and was probably the highlight of my career.”

At the Tokyo Olympics, Schneider placed 17th overall in the 5000m with a time of 15:00.07, failing to advance to the event finals by just over half a second.

“It’s just bittersweet when you can be really, really proud of the way you raced and miss making the final by fractions of a second,” Schneider said.

Looking toward the future, Schneider hopes to make strides both on and off the track, chasing faster times in the 5K and 10K events and returning to graduate school at Grand Canyon University, hoping to pursue a potential career in mental health counseling.

“I am excited to keep pursuing running at the highest level possible,” Schneider said. “I would love to run some personal best times and hopefully continue to represent Team USA at the international level. I’m also pursuing a second master’s degree in clinical mental health counseling. I have some dreams of helping people in that capacity and in that profession.”

Carrie McDonald is a sophomore in the College. The Equalizer appears in print and online every other week.