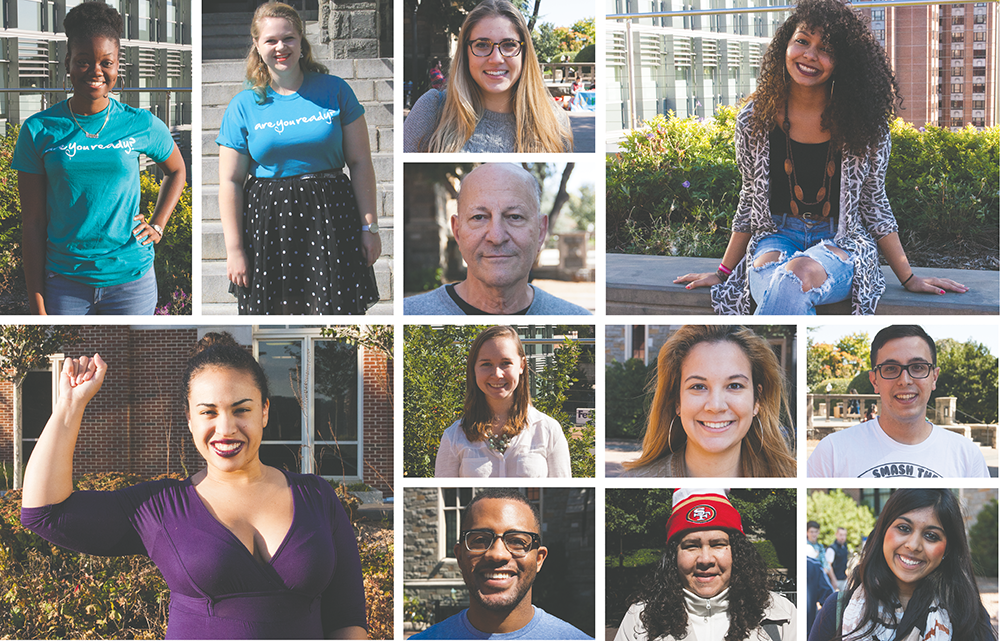 If you were to ask 10 Georgetown students what feminism is, you would get 10 different answers. The word and its associated movement, even though they have been seen as controversial by some, have inspired generations of women on both sides of the political aisle to become more involved in advocacy and outreach. But, what feminism means has changed since the rise of second-wave feminism in the 1970s.

“Before I came to Georgetown, I didn’t identify as a feminist because the only definition that had been presented to me was one of very second-wave, militant, bra-burning, kick-all-the-men-out, very aggressive form of feminism that I don’t think is a very accurate definition of what feminism is today,” H*yas for Choice President Abby Grace (SFS ’16) said.

The question of what feminism is today is a difficult one, although the emergence of mainstream feminist celebrities has forced it into the public eye more than ever before.

Social media have been inundated with images of powerful and outspoken women both proudly accepting the feminist label — Beyoncé, Taylor Swift and Emma Watson — and resoundingly rejecting it — Shailene Woodley, Gwyneth Paltrow and Madonna. On top of that, the way in which these high-profile women choose to exemplify feminism, whether that be through freely expressing sexuality or showing that women can have demanding careers as well as a family, vastly differs. Despite these differences, many students believe that this increase in publicity can only help the feminist cause.

“There’s this expression ‘you can’t be what you don’t see,’ and I think that’s true with feminism, too. If you see it being something more accessible, you’re able to start identifying that way,” Erin Riordan (COL ’15) said.

Feminism is having a big moment in America and abroad, but what about here at Georgetown? Again, answers vary based on personal observations and experiences.

Riordan, who is a Women Advancing Gender Equity fellow at the Women’s Center, was moved by the perceived toxicity of misogyny on campus to found her blog FeministsAtLarge in July 2012 with Kat Kelley (NHS ’14). While the pair lacked experience in running a blog-based outreach platform, they soon found a very broad and supportive network of students.

“We had 60 authors in six months,” Riordan said. “There were a lot of people who had so many things to say, who really wanted that space and were so excited to have that sort of microphone that we were handing them and really responded. I mean people would come up to us at parties and be like, ‘Thank you so much for this space.’”

While it is clear that plenty of students believe that an acceptance of the feminist movement is growing on campus, many others still feel the sting of a misogynistic campus culture.

“I think the culture at large is really insidiously patriarchal, misogynistic in the small ways that it happens. We have rape culture here and there’s lots of times when I see people — myself included — being slut-shamed,” Riordan said. “I see the backlash in the party culture.”

Other students have felt this backlash in much more personal and threatening ways. Haley Maness (NHS ’15), who is involved in a number of organizations focusing on women’s issues including Sexual Assault Peer Educators, Sexual Assault Working Group, Take Back the Night and Are You Ready, is a vocal advocate for feminist issues on campus.

“When it comes to social issues, I believe very strongly that the laws of physics apply,” Maness said. “So, every action has an equal and opposite reaction. So, the more people become accepting, the more others become more unaccepting.”

In the past, Maness regularly responded to and engaged with her most hateful critics on feminist issues over the Internet.

“I used to feel comfortable and get really enthused about engaging all varieties of people in what I considered to be a feminist dialogue because I thought that everyone would be open to engaging with this topic,” Maness said. “And I have found, unfortunately, that that is not the case. People are violently against that idea. And I use the term violently on purpose.”

The on-campus response to her public opposition to sexist and derogatory microaggressions and straight-up aggressions quickly escalated, culminating in an anonymous post to the Georgetown Confessions Facebook page on Oct. 5, 2013, that named vocal campus feminists, including Maness, who “should be shot.”

“The way that I saw it, they weren’t attacking my world view,” Maness said. “They weren’t necessarily denouncing feminists or feminism. They weren’t denouncing the idea — they were denouncing people who agree with that idea, and I think that is very scary when you start feeling willing to harm the people who associate themselves with an ideology.”

But, it was the anonymous nature of the comment and the support it garnered on Facebook through likes and comments from friends and strangers alike that really impacted Maness the most, leading her to change her approach to engaging in feminist dialogues both on campus and online.

“I knew people who said that feminists were wrong or worthless, so when I got this confession that said I deserved to be shot and it was anonymous, suddenly it came from everybody in that Georgetown community,” Maness said. “When you see tiny microaggressions everywhere, all of a sudden every person could be capable of that level of hatred.”

Frustrations also extend beyond the personal sphere into the university administration’s policies and their impact on student expression and on-campus activism.

Kimberly Blair (COL ’15) is a member of the board of United Feminists, an organization that seeks to foster discussion on various topics within feminism, including intersectionality, politics and gender identity. Stepping into this role for the first time has left her largely disillusioned with the university officials and policies that hinder her group’s ability to grow and foster expanding conversations about feminism on campus.

“There is no support for student groups to carry out our work — and it’s work that pertains to cura personalis, that pertains to being men and women for others. There’s a disconnect between the bureaucracy and the student groups, and that’s why you don’t see that radicalism … many people seem scared of any kind of activism or expressing how they truly feel on this campus,” Blair said.

“The administration belittles the rights of groups on this campus because it’s too busy trying to protect their national and religious image, and students get shafted as a result,” Amann said.

While criticisms of the administration are common, many of those same critics are hopeful about change through alternate avenues on campus, particularly the Georgetown University Student Association.

“I came in as a freshman, and then Clara and Vail won. The first all-female ticket won student body president and vice president, which was a huge change for Georgetown to have two women running the student body,” Amann said. “I think Clara and Vail really started the trend of [sexual assault] activism on this campus, and I think it’s permeated every GUSA administration since then, and it sets up the university really well for the future.”

Much of the disagreement within and outside the movement comes from the word “feminist” itself. Many students and celebrities object to the historical connotations of the word: its associations with militant, second-wave feminism and exclusionary dominance by upper-middle-class, white women.

“I’m still struggling with the term a little bit because I feel like the word ‘feminist’ isn’t as inclusive as I want it to be,” said Queen Adesuyi (COL ’16), a resident in the Intersectional Feminism Magis Row House and Sexual Assault Peer Educator. “So, sometimes I’ll say ‘black feminist.’ I’m not not a feminist. Just the technicalities of the word are getting to me. . . I happen to be a woman, and I also happen to be a black person, so that intersection — for me feminism needs to cover all of that.”

Stephanie Estevez (COL ’16) is also a resident of the Intersectional Feminism House, a Magis Row townhouse in its first year of operation.

“Our house is about the intersections of the varying degrees of oppression women face — for example, being a black woman is different from being a white woman and being a disabled, black and poor woman — you have different positions in society, and it’s going to be a journey of reciprocal learning for us in the house throughout the year,” Estevez said.

Jimmy Ramirez (COL ’15), the chair of advocacy for Georgetown Scholarship Program and a member of SAPE, confidently labels himself as a feminist, and also recognizes the lack of discussion of intersectionality as part of the feminist dialogue on campus.

“As a campus we struggle with looking at feminism through the lens of other identities,” Ramirez said. “Race, class, gender identity, sexuality, religion, and ability are all important identities we must continually consider when one wants to be a feminist.”

For Adesuyi and Estevez, addressing these various and fluctuating aspects of identity is an integral part of how they engage with advocacy for gender equality. But for those who fall within the white majority of both Georgetown’s student population and the country as a whole, their message can often be seen as a personal insult or attack. What both Adesuyi and Estevez — and many feminists outside the historically dominant “affluent white woman” demographic — struggle with is promoting their brand of gender and identity equity in the face of a threatened majority.

“I think the first part of checking your privilege is just listening and recognizing that you have it,” Estevez said.

“If you don’t have to deal with that oppression, it doesn’t even cross your mind. You don’t need to go to events that address that because that’s not your life,” Adesuyi said.

Yet Estevez is also quick to clarify,:“We hate the privileges, not the people.”

Ramirez also noted the importance of finding ways for men on campus to be involved in feminist activism and dialogue, and with Emma Watson’s recent speech at the United Nations for the “HeforShe” campaign exploding over social media, students may hope to see more male students accepting the invitation to be part of the conversation.

“When I discuss issues of gender equality I am incredibly aware of how when I share my ideas, people are more likely to listen than to my female peers,” Ramirez said. “I have learned that acknowledging my position as an active ally is the most meaningful way I can engage.”

So where do we, as a campus community, go from here?

The general consensus among Georgetown’s feminist groups is that, while progress is being made, the changes are very slow and often hindered by both the harmful learned attitudes of the student body and the inherent conservatism that comes from Georgetown’s treasured Jesuit identity.

“It’s easy to get frustrated and want to give up because the change is so slow, but it’s all about encouraging future Hoyas of color and their white allies and their male allies and everyone to continue fighting toward all these different systematic changes,” Estevez said.

“I think that inherently because we are a Jesuit university, there’s a lot of things that we cannot directly address. That’s the reality and it sucks. But at the same time, we are so far ahead of other Catholic and Jesuit schools, so that’s great, but we have a long way to go,” GUSA Vice President Omika Jikaria (SFS ’15) said.