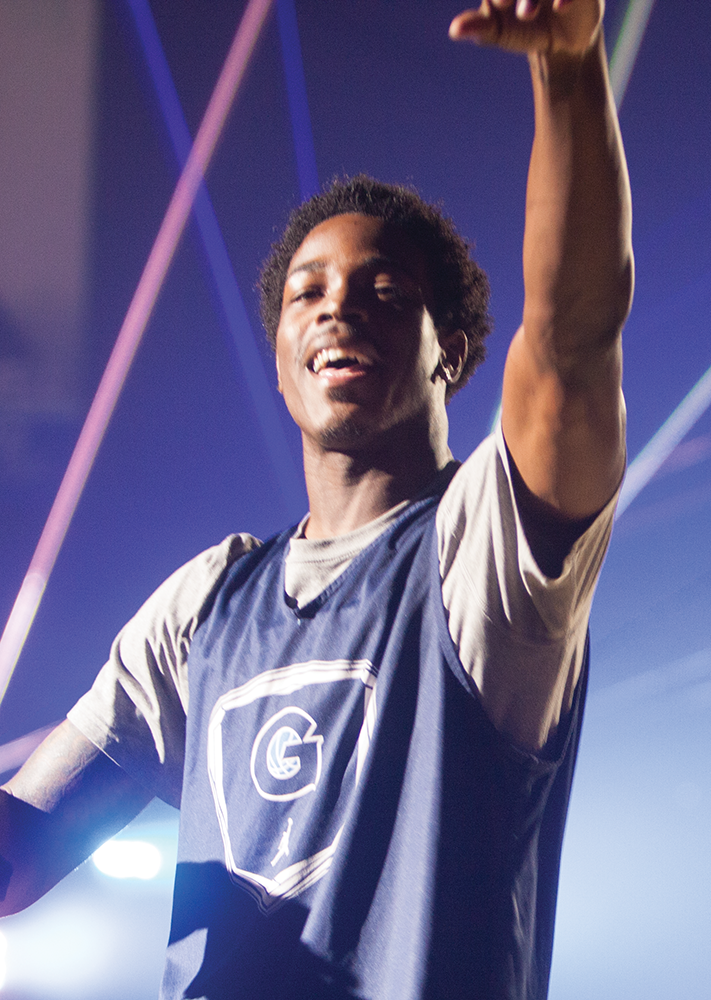 After missing the NCAA tournament and being knocked out in the second round of the NIT, the Hoyas needed a spark. Luckily, the Hoyas’ recruiting efforts gave them a fire.

As ESPN’s seventh-best recruiting class in the nation hits the court for Georgetown this season, expectations are high, but the talent is there to match them.

Five-star recruit Isaac Copeland is the true catch of the class. Even before wowing Hoyas fans with a win at the Hoyas Madness dunk contest, the athletic 6-foot-9-inch power forward has impressed Head Coach John Thompson III.

“Isaac is a basketball player. He can play inside, he can play outside. He can guard multiple positions. Isaac is a very good rebounder. So we’ll see,” Thompson said.

Although that may not sound like an ecstatic endorsement of the Raleigh, N.C., product, Thompson is likely trying to relieve the pressure of high expectations currently buffeting the lanky big man. Copeland is expected to compete for major playing time at the four position, currently occupied by senior Mikael Hopkins, who has been struggling with fouling and ball control over the course of his career.

“I think it’s a tremendous fit,” Smith told 247 Sports. “Georgetown is one of the top universities in the world, and Isaac is an exceptional student academically. Georgetown has a system that wants to have as many versatile and skilled guys on the floor to run their offense and that fits Isaac to a T. He’s very skilled, very versatile and did what he had to do to help us win. He was a willing rebounder and he’s someone that wasn’t afraid of contact in the post.”

Copeland led Brewster, along with Kansas commit Devonte Graham, to the New England championship as well as a National Prep Championship as a senior. The MVP of his Kenner League team over the summer, Copeland’s strengths include hitting mid-range jumpers, rebounding and changing the game at both ends of the court with his considerable athleticism.

Whenever someone that big can do a 360-degree reverse dunk and make it look easy, as Copeland did during Hoya Madness, it is hard not to get excited to see what he can do against opposing defenses.

While Copeland certainly impressed over the summer, the leading scorer of the entire Kenner League, which featured Georgetown stars D’vauntes Smith-Rivera and Jabril Trawick, was freshman forward L.J. Peak.

The native of Gaffney, S.C. — the hometown Kevin Spacey’s character Frank Underwood in the hit show “House of Cards” — scored 23.9 points per game and impressed with his ability to slash to the basket. The 6-foot-5-inch, 215-pound small forward is the most physically impressive of the five freshmen, resembling Trawick in both physique and playing style.

Senior center Josh Smith is one fan of Peak’s game.

“I think L.J. has been the most [impressive freshman],” Smith said. “We all knew he was a great scorer coming out of high school, he had crazy numbers, but since I’ve been here, the guys I said before [are good] but L.J., he’s really good, he’s smart, he scores, he can dribble, he can shoot, he has a really good feel for the game for someone who hasn’t played in college yet.”

Peak will look to become just the third freshman to start in the first game of the season in Thompson’s 11 years at the helm. Former point guard Jonathan Wallace was the first to do so in November 2004 — Thompson’s first game as head coach — and former center Greg Monroe was the second in November 2008. Senior Aaron Bowen will challenge Peak for playing time on the wing.

If the promising athlete cuts down on his turnovers, he could be a potent force for Georgetown from the opening game.

The third recruiting gem of the Class of 2018 is forward Paul White. Like Peak, White is a four-star recruit. The 6-foot-8-inch Chicago native will have the opportunity to serve as an important member of the frontcourt rotation, likely backing up Hopkins and Smith along with Copeland. While more of a developmental project than the aforementioned freshmen, White averaged a respectable 12.7 points per game this summer at Kenner League.

Thompson thinks that White’s potential puts him in the same category as Copeland and Peak.

“We could put Paul in the backcourt right now without a hiccup. He can do a lot of different things. He has a good feel for the game, throws passes, can score and is used to winning, which means a lot,” Thompson said. “If you look at his high school career, not just winning, but when there was a big game he played well in big games. There is some merit to that.”

Indeed, White is used to winning, as he led his Whitney Young High School team to the 2014 Illinois 4A State Championship over Benet Academy. White played alongside No. 1 overall recruit Jahlil Okafor, who is now at Duke.

The three-star recruit may not have come to the Hilltop with the hype that Copeland received, but he is also likely to play significant minutes for the Hoyas, who lack depth at point guard following the graduation of Markel Starks. Campbell will slot in behind starting floor general and junior co-captain D’Vauntes Smith-Rivera, and hopes to learn the ropes from the Big East Preseason Player of the Year.

So far, the 6-foot-2-inch guard has made a positive impression on Thompson, who expressed confidence in Campbell, explaining that he does not think that Starks’ absence will result in weak team ball-handling.

“It doesn’t have to be the little guy that brings it up [the court]. We have multiple people here including our little guys, and I do understand how Tre [Campbell] has been good. I don’t think the point guard position is going to be an issue,” Thompson said.

While he shot only 38 percent from the field over the summer, the point guard did average an encouraging 16.7 points and 1.3 steals a game.

The wiry 6-foot-9-inch forward will take some time to develop and does not figure to be a part of the playing rotation in his first year on campus. He struggled over the summer, averaging just 5.4 points per game on a paltry 28 percent shooting in the Kenner League. However, Trey did pull down 7.1 rebounds per game, good for third-most among all Hoyas.

Senior guard and co-captain Trawick thinks that Trey’s impressive work ethic has stood out among a talented freshman class.

“Isaac Copeland was a five-star player. All of them [are good]. Tre Campbell [is] local, he’s ready to play, he plays defense, he’s a natural point guard and Trey [Mourning] works hard so I like all of the freshmen,” he said.

All five players offer different sets of skills for Thompson to use on the court. With Copeland’s solid fundamentals, Peak’s speed and scoring, White’s ability to solidify the low post, Campbell’s ball-handling skills and Mourning’s rebounding and energy, the Class of 2018 may prove to be Thompson’s best recruiting class ever.