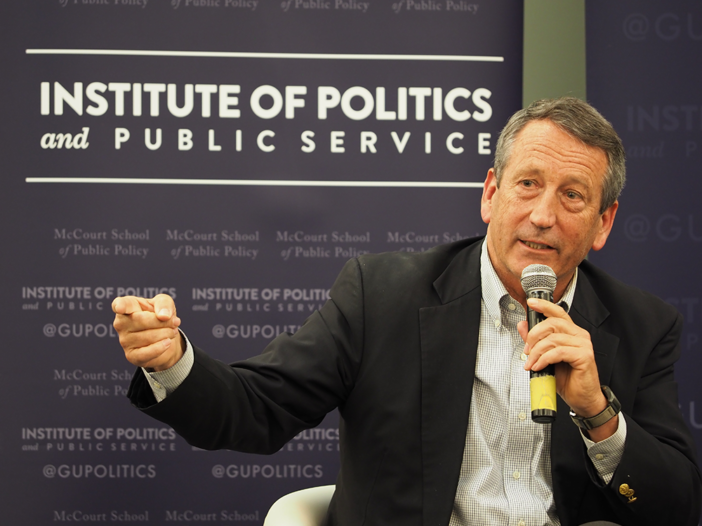 The event, titled “Reflections on Running: Mark Sanford (R-S.C.),” was hosted by the Georgetown Institute of Politics and Public Service, Georgetown University College Republicans and Georgetown Bipartisan Coalition. The forum was moderated by Mo Elleithee (SFS ’94), the executive director of GU Politics and former communications director and chief spokesman for the Democratic National Committee.

Sanford centered his campaign, which he ended in November 2019, on working toward reducing the national debt, something Sanford believes to be a pressing issue that will impact future generations.

“We are at a much more precarious spot than people realize, and we are indeed at a tipping point,” Sanford said. “I would say it was the debt and the spending that got me fired up, and it’s what’s driven my interest in politics.”

The United States currently faces a record-high $22 trillion public debt projected to rise to $28.7 trillion by 2029, according to NPR. Despite current positive economic growth and relatively low unemployment, the magnitude of the deficit matches deficits in times of recession or war, according to NPR.

The American people need to recognize the gravity of the increasing national debt before it turns into a more significant crisis, according to Sanford.

“What I am discouraged by is the degree of pander that is now in politics. People are not dumb, and if they are left in the choice between more versus more, they’ll choose more,” Sanford said. “I fear that the only thing that may wake us up is a real economic stalling.”

Sanford first became involved in national politics when he served as the U.S. representative for South Carolina from 1995 to 2001 and later served as governor from 2003 to 2011.

Sanford made national headlines when he reportedly disappeared in 2009 after claiming to be hiking along the Appalachian Trail. Instead, Sanford was in Argentina with a mistress. Sanford then resigned as chair of the Republican Governors Association and did not run for a second term.

Sanford later served as a U.S. representative for South Carolina from 2013 to 2019. His decision to return to the political arena stemmed from a desire to impact public policy and restore his political career, according to Sanford.

Sanford lost his primary bid in his 2018 reelection race to Katie Arrington. Trump backed Arrington in a tweet that also described Sanford as unhelpful to the president’s reelection bid. Arrington went on to lose the general election to current Rep. Joe Cunningham (D-S.C.).

Trump, of whom Sanford is frequently critical, is dangerous to the political stability of the United States in many ways, according to Sanford.

“I’m not a fan of the president. I’ve been very transparent about that,” Sanford said. “I mean I think he’s disastrous on many different levels for our country and for our civilization.”

Authenticity and adherence to one’s principles and beliefs in the realm of politics are essential to good governance, according to Sanford.

“You got to be you in the world of politics,” Sanford said. “If not, you become a skeleton of a human being, and you’re walking around not really believing stuff you’re talking about.”