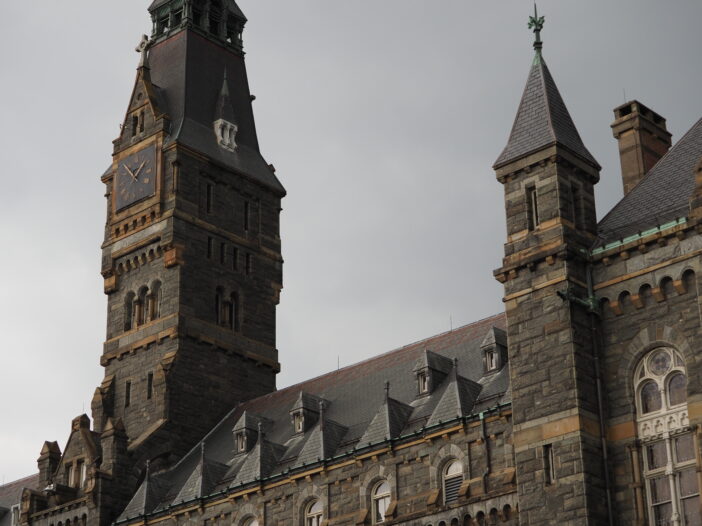 This news comes two years after university president John J. DeGioia (CAS ’79, GRD ’95) committed to creating a reconciliation fund; descendants have yet to receive any funds from the university as of December 2021, according to a petition circulated by the Georgetown University Student Association (GUSA).

The following is a brief history of the GU272 activist movement as of December 2021 to provide context for current student activism as well as the university’s plans to launch a fund for descendants next semester.

In 1838, Georgetown’s Jesuit presidents Rev. Thomas Mulledy, S.J., and Rev. William McSherry, S.J., sold 314 enslaved people, who are known today as the GU272, to pay off the university’s construction and maintenance debts. Today, the enslaved people sold by the university are known as the GU272, but researchers have identified 206 people who were sold in Louisiana and 106 people who were a part of the original sale by the university, but were sold elsewhere or remained in Maryland, according to the GU272 Memory Project.

The sale separated family members and prevented some from practicing their religions, according to the GU272 Memory Project.

The sale of the GU272 raised $115,000, which is equivalent to about $3.3 million today. The funds raised by the deal helped the university remain financially afloat.

In 1993, Robert Emmett Curran, a former Georgetown history professor, detailed the university’s ties to enslavement in the The Bicentennial History of Georgetown University, according to the GU272 Memory Project.

In September 2015, DeGioia formed the Working Group on Slavery, Memory and Reconciliation, to advise the administration on the best ways for the university to ackowledge its ties to slavery.

An article published by the The New York Times in April 2016 brought the sale of the GU272 into the public discourse following a series of student demonstrations in the fall of 2015. The protests prompted the removal of Mulledy and McSherry’s names from two buildings on campus. In 2017 the building which had been previously called Mulledy Hall was named Isaac Hawkins Hall, in honor of Isaac Hawkins, the first enslaved person recorded in the university’s 1838 sale.

Richard J. Cellini (CAS ’84) created the Georgetown Memory Project (GMP), with the goal of identifying the people the university sold in 1838 and locating their living descendants,, according to the GMP website.

Since the launch of the GMP, 232 ancestors of the GU272 and 10,642 direct descendants have been identified, according to the GMP website.

In 2018, students organized more demonstrations, including an art installation honoring the GU272.

Student efforts culminated in the GU272 referendum developed by GUSA in 2019, which called for the addition of a $27.20 semesterly fee to student bills for allocation to descendants of the GU272.

Although the referendum passed overwhelmingly with 66.1% of students voting in favor and an all-time GUSA record election turnout of 57.9%, the university did not move forward with the fee, sparking protest from students who conducted a series of sit-ins outside board of directors’ meetings.

In lieu of the semesterly fee, DeGioia announced in 2019 the university’s intention to establish a $400,000 reconciliation fund for descendants, as well as community-based projects benefiting descendants. According to a December 2021 petition drafted by members of GUSA, the university has not followed through on their commitment to descendants.

The reconciliation funds for the 2021-2022 academic year have been set aside for a review by the grant review committee; the fund was delayed due to the COVID-19 pandemic, according to a university spokesperson, who anticipates a spring 2022 launch.

In addition to the reconciliation fund, last fall the university set aside $100,000 of hurricane relief funds to be distributed to GU272 descendant communities in Louisiana after the impact of Hurricane Ida, according to the spokesperson.

Descendants of the GU272 have honored their ancestors’ histories, including Mélisande Short-Colomb, who shared her family’s history in an autobiographical performance entitled “Here I Am.” Additionally, members of the Georgetown community have advocated for descendants, including Georgetown music professor Carlos Simon, who released a song honoring the 314 enslaved, which was performed at the Library of Congress on Nov. 5.