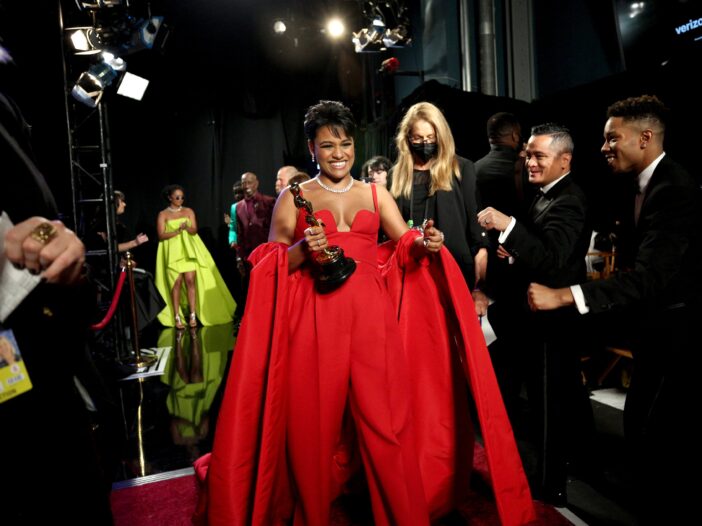 Maskless celebrities, awkward jokes and extravagant gowns. The 2022 Oscars aired Sunday, March 27, and if it were not for the fact that the chairs were widely separated, this Oscars would have felt like any other pre-pandemic ceremony, offering a sense of normalcy for film enthusiasts.

Hosted by Regina Hall, Amy Schumer and Wanda Sykes, this year’s Oscars will surely be remembered for one thing: Will Smith’s surprising on-stage slap of presenter Chris Rock.

“The Guide’s Guide to the 2022 Oscars” recaps Hollywood’s biggest night.

Coming in with 10 nominations, “Dune” was certainly a topic of discussion at the Oscars this year, especially after many fans were upset that the film’s director, Denis Villeneuve, did not receive a Best Director nomination. The science fiction film, based on the 1965 novel by Frank Herbert, tells the story of a young man (Timothée Chalamet) sent to a dangerous planet in a grand attempt to save the future of humankind. The film is most notable for its stunning visuals, cinematography and two hour and 35-minute running time.

The film won six Oscars, the most for any film of the evening. The awards include: Best Cinematography, Film Editing, Original Score, Production Design, Sound and Visual Effects. Although the film did not win best picture, fans are already speculating that “Dune: Part II,” expected to be released in 2023, could take home the prize.

Will Smith winning Best Actor for his performance as Richard Williams, the father of tennis icons Serena and Venus Williams, in “King Richard” was not his most talked-about moment. Instead, it was when he went on stage to slap Chris Rock after the comedian made an insensitive joke about Smith’s wife, Jada Pinkett. Leaving the stage, Will Smith proceeded to yell at Rock and curse, creating a tense environment in the auditorium and causing the #whatjusthappened hashtag to trend on Twitter.

Nearly minutes after the incident, Smith proceeded to win his award, apologizing for his behavior during an overly long, emotional speech, likening his behavior to a decision that occured out of love and a choice that his character Richard Williams would have made too. Chris Rock chose not to press charges and the academy announced they will initiate a formal review process.

It would not be a conversation about the Oscars if Lin-Manuel Miranda was not mentioned. In addition to directing the nominated film “tick, tick…BOOM!” Miranda was nominated for Best Original Song with his song “Dos Oruguitas” from the Disney animation “Encanto.” If Miranda had won, he would become an EGOT recipient, meaning he would have received an Emmy, Grammy, Oscar and Tony award. However, “Encanto” failed to hit the mark.

Instead, the award for Best Original Song went to another young set of artists, Billie Eilish and Finneas O’Connell, for their song “No Time To Die,” which accompanied the James Bond film of the same name. Although the song was released in 2020 when the film was expected to be released, due to multiple COVID-19 delays, the song was only considered this year.

Alongside Kristen Stewart, who was nominated for her performance as Princess Diana in “Spencer,” DeBose was one of the only openly LGBTQ Oscars nominees. The lack of LGBTQ women and women of color among the nominees is a reminder that the film industry still has a long way to go in hiring and representation.

“CODA,” whose title is an acronym for “child of Deaf adults,” tells the captivating story of a 17-year-old girl — the only hearing member of a Deaf family in Massachusetts — who helps her parents and brother maintain their fishing business.

The film took the Oscar’s biggest award, winning Best Picture, and being the first to do so with a predominantly Deaf cast. The film was also the first film to initially premiere on a streaming platform (Apple TV+) to win the award. Also making history is the film’s star, Troy Kotsur, who is the first deaf male actor to win Best Supporting Actor. In his emotional speech, Kotsur thanked the Deaf theater stages and dedicated the award to the Deaf community, the ‘CODA’ community and the disabled community.

With wins for Ariana Debose and “CODA,” this year’s Oscars proves the film industry is progressing, shaping a more representative narrative in terms of storytelling and the actors within. However, this year’s award ceremony must not stand alone. The hashtag #oscarssowhite began only seven years ago and history, unfortunately, is no stranger to repetition. Each Oscar ceremony is a reminder for more inclusion in film. One can hope that the 2022 Oscars presented a reminder that sticks.