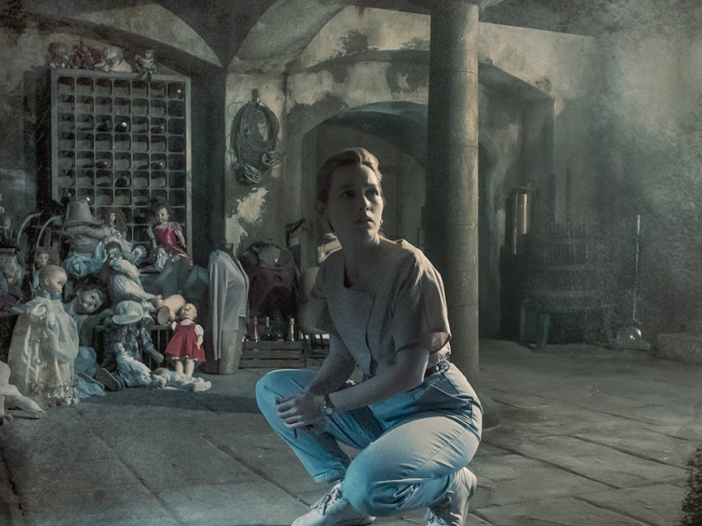 An ivy-covered manor with a dark past. Eerie mist rolling off of an on-property lake. Creaks in the hallways in the dead of night. Two orphaned children living under the shadow of the death of their loved ones. “The Haunting of Bly Manor” offers the perfect recipe for a Halloween treat.

Fans of Netflix’s 2018 hit “The Haunting of Hill House” will die for the second installment in the “Haunting” anthology. Set in another spooky house, “The Haunting of Bly Manor” delivers more satisfying frights punctuated by masterful writing and heartbreaking (and sometimes heartwarming) familial storylines.

The season opens with a familiar face — “The Haunting of Hill House” alum Carla Gugino’s mysterious character wakes from an unnerving dream that featured a figure emerging from a body of water into a pitch-black night. She pays this dream no mind, however, and heads to the rehearsal dinner of a wedding, all while viewers’ heads are overflowing with murky questions about the dream’s meaning. Then, seated by a fire in a cozy study, she begins to narrate a story “full of ghosts of all sorts.”

In an exclusive video interview with Entertainment Weekly, creator Mike Flanagan called “Bly Manor” a “gothic romance story,” differentiating it from its highly successful horror-inspired predecessor. Sure enough, every surface of “The Haunting of Bly Manor” is dredged in gothic aesthetics that would make author Henry James — whose novella “The Turn of the Screw” inspired this season — proud.

By framing this story within a story, Flanagan epitomizes the gothic genre, pulling from classics like “Frankenstein,” which tells the titular character’s story through a sailor’s letters to his sister, and even cult classics like “The Twilight Zone,” which also includes an omniscient narrator. Already, this narration style sets the tone of the series, putting distance between the audience and its unreliable characters, infusing “The Haunting of Bly Manor” with a sense of ominous myth. Paired with the setting of an ancient manor in 1980s England, this story-within-a-story technique catapults viewers into the tale immediately, drawing in their focus like a hungry fish to a shiny lure.

Victoria Pedretti, known for playing fan-favorite Nell Crain in “The Haunting of Hill House,” returns as equally endearing Dani Clayton, an American applying for an au pair job for the residents of the titular Bly Manor. Pedretti’s acting ability is by far one of the triumphs of this anthology. Viewers are immediately drawn to Dani’s optimism and bright smile—a façade that will begin to crack and crumble as the series wears on.

Though the scares here are not as horrifying as the jump scares “Hill House,” Bly Manor’s ghosts are more varied, taking many shapes and forms — all of them a vehicle through which the writers convey the characters’ respective traumas and emotional demons.

The poignant emotions and symbolism of the ghosts is what makes “The Haunting of Bly Manor” truly, beautifully haunting. Though the plot is slow at times and perhaps a little lackluster — as compared to “The Haunting of Hill House,” which has an intricate and astonishingly complex plot, making it a nearly impossible act to follow — the characters and their individual journeys of healing from abuse, grief, betrayal and trauma are the beating heart of the series.

Characters, both villainous and heroic, show deep nuance in person, with the series’ writing completely up to par with the previous installment. Each episode, rife with flashbacks that slowly fill in the gaps, and glowy, spectral cinematography that buries viewers deeper and deeper beneath the winding foundations of the house and reveals the significance of its physiological (and physical) phantoms. Each character and plot point becomes more interesting with every episode, but the suspense mellows down as things come to a bittersweet end with the final episode which will leave you crying enough tears to fill a creepy lake of your own.

Most importantly perhaps is the love in this show. If the characters are the heart of “The Haunting of Bly Manor,” then the love they feel — or don’t feel — for one another is the blood pumping through its veins. Love is central to the plot and essential to the success of the show; every character is involved in a love story of some sort, the horror aspects of the series representing all of the joys and pains associated with the affairs of the heart.In the end, “The Haunting of Bly Manor,” with its stunning visual effects and superb writing, shows viewers that the ghosts that haunt us the longest aren’t the ones we are most afraid of, but the ones we love the most.