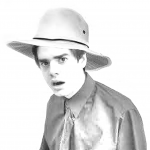 Today, I’d like to focus on one specific animal that I thought I once loved but not anymore. Jessica Poole, a human (Homo sapiens), is my ex-girlfriend who recently left me for someone who, according to Jessica, “Chews like a normal f—ing person and doesn’t make me leave the apartment after seeing an ASPCA commercial. Stop howling, Doug, there are no wolves in D.C. for you to summon.”

Though Jessica may appear to be an average human with her precious bipedal locomotion and delicate little manual dexterity, she is anomalous amongst her species for surviving without a heart. As most of you already know, humans are typically known for their complex brains and societies; however, Jessica is not — she is now in a relationship with Triathlon Hero Mike Richards (Assholo loseriens), a man-child with pretzel stick legs and a penchant for ruining my life.

One way Jessica fits the bill for the human species is through her use of tools. Human tool use predates the species itself — chimpanzees, our closest living relatives, have been using tools to hunt and forage for millions of years. However, when human ancestor Homo erectus emerged roughly 2.6 million years ago, tools quickly began to advance. The first known Homo erectus, Reginald, is thought to have invented up to 27 different types of screwdrivers before dying of old age at 17. Nevertheless, Jessica’s use of tools is far more extensive than Homo erectus; she used me as a tool to get discounted Ed Sheeran tickets through my cousin who works at a radio station. She used me for my parents’ apartment overlooking Central Park. She used me to win bio-trivia night at Rainforest Café. Now, she responds to neither my phone calls nor my mating calls, which I screech into a megaphone outside of Mike’s house whenever I see her bicycle propped up against his garage. The sidewalk is public property. Local government is too dysfunctional to institute formal noise regulations. I bet her bicycle is propped up against his garage right now. Disgusting.

Most humans have complicated emotions and experience what scientists call “empathy.” Not Jessica! While a normal person would at least pretend to care when tears stream down my face, Jessica responds by saying that I shouldn’t cry over a relationship that I “destroyed” with my “selfishness, clinginess, jealousy, deceitfulness, messiness, disrespect, condescension and constant assertions that I am ‘addicted to coffee.’” Yes, all of that’s true, but do you remember that time I bought you a used copy of “Click” for the one-week anniversary of your 19th birthday and you said it was “fine?” Would Mike do that? No, he’d probably spring for a lesser Adam Sandler movie, like “Spanglish” or “Funny People.” Your loss.

Jessica, I don’t care that you have a 3.96 GPA and a bright and distinguished future in public service. Great, you’ve secured a competitive internship with a well-known and impactful non-profit and are screwing a guy with the chest of a Norse god and the haircut of a Hitler Youth, but that doesn’t mean that you’re too good for me. Yes, I’m on academic probation. Yes, I still have a subscription to “Zoobooks.” Yes, I intentionally leave trash piled up in my backyard so that I can bear witness to what I call the “maggot garden.” But, Jessica, I have something that you don’t: a column.

Thanks for reading “Animals Among Us!” I hope that you learned a lot about the animal kingdom and I hope you learned a little about yourself too. Be sure to check back in whenever I find love again and get another one of these puppies (Canis lupus familiaris) published. Until next time, remember: animals!
“Doug Freide” is a rising senior in the College. Animals Among Us appears every other Sunday.