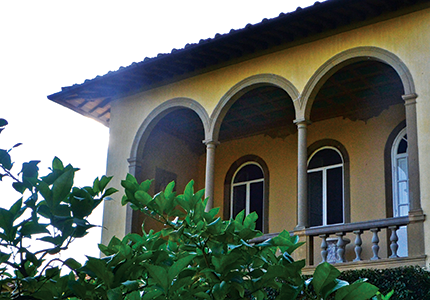 FLORENCE, Italy — Perched high on the cliffs above Florence and nestled in the Tuscan countryside next to the 15th-century summer residence of the Medici family, Georgetown’s villa in Fiesole is perhaps best known to students for offering a lavish study abroad program.

Along with three meals a day prepared by first-rate Italian cooks, students also have their beds made, rooms swept and bathrooms cleaned every day. Next to the main building, in a smaller yet equally beautiful villino, students attend class while overlooking world-renowned gardens.

One can get distracted by the glamour of the villa.

Despite its enchanting grounds and charming decor, Villa Le Balze has a complicated past, serving first as the home of a philosopher and later as a Nazi base. The history of the villa includes the story of its founder, whose ghost still roams the hallways of the main building, watching students as they sleep.

Or so the legend goes.

Le Balze, which translates to “the cliffs,” was built by American philosopher Charles Augustus Strong in 1913 and donated to Georgetown University in 1979.

Strong married Elizabeth Rockefeller, the daughter of American oil tycoon John D. Rockefeller, and remained at the villa for the rest of his life. He passed the time writing books and welcoming other philosophers to his estate before he died in 1940, leaving his fortune to his daughter, Margaret.

During World War II, the villa was the main office of the Bank of Tuscany, but became a headquarters for the German military as the war progressed. In 1944, the villa found itself under siege by advancing Allied forces that used heavy artillery against the retreating Axis powers. Constant barrages and explosive shells inflicted heavy damage on the villa, its gardens and surrounding buildings.

After the war, Margaret remained at the villa for 35 years until she donated it to the university as the Charles Augustus Strong Center for Scholarship with the idea that courses would focus on Italian culture and history.

Although neither the Strong nor Rockefeller families had any history with Georgetown, Margaret chose to donate the property to the school over other competitors due to the efforts ofFr. J. Donald Freeze, S.J., then the university provost. Freeze discovered that Margaret’s son had died and was buried at the cemetery in Fiesole, according to Alan Earhart, director of administration at Villa Le Balze. Each grave at the cemetery is adorned with a light, and Freeze reportedly promised Margaret that the university would pay the small fee every year to keep the light on. Motivated by her newfound connection with Freeze, Margaret chose Georgetown as the recipient of her father’s estate.

Freeze went on to lead the creation of the academic programs at the villa, resigning from his position as provost in 1991 to run the program in Italy through the following year.

Now one of the university’s best-known study abroad programs, the villa continues to offer new experiences.

With a main building that can house up to 20 students and with accommodations for 10 to 13homestays, the villa averages 70 to 80 students each year. But according to Earhart, the venue has greater potential.

“There are the semester programs, and we always have that competitive process for the faculty member-in-residence to come over,” Earhart said. “But in the short-term programs, we just recently changed it so it’s completely competitive.”

In the past, the same professor could potentially run a short-term program during the summer for an indefinite number of years, but recent changes to faculty management have created opportunities for more competitive programming.

“We’re always going to run the fall and spring semester, but in the short-term programs, we can do some pretty incredible stuff,” Earhart said.

The Potomac Foundation — a policy analysis group based in Virginia — ran a program in conjunction with Georgetown professors in June that applied Machiavellian teachings to Cold War episodes and current power structures.

Another short-term offering this summer was the three-week course “The Influence of Christians and Jews on the Shaping of Italy.”

“We covered everything from art, architecture, literature, music, film … just everything. And the professor was able to integrate that into our field trips. We had a really holistic experience,” said Deb Duncan (COL ’15), who studied at the villa this summer.

“[This summer,] we really immersed ourselves in the culture of Florence. We got to take field trips and once even went to a cooking class,” said Allison Cannella (COL ’16).

Though its academic offerings have remained strong, the villa has faced some recent setbacks with its property.

Following the collapse of a roof in July 2010, students were unable to live in the main building, although academic programs continued. Students set for Fiesole for the fall 2010 semester stayed and studied in nearby hotels. Programming at the villa resumed normal operations by the beginning of spring.

Although the villa already has strong course offerings, Earhart noted that its potential would be much greater if the facilities were expanded.

Above the main classroom in the villino is the loggia, a covered, open-air space with panoramic views of Florence that remains largely unused. Earhart hopes to close the loggia with glass, adding a turnkey conference center, audio-visual accommodations, heating and air conditioning to increase the estate’s capacity from 45 to 80 — a project that has earned the “non-committal, verbal approval” of the Province of Florence, Earhart said.

“That’s something that would dramatically increase our potential. There’s no place in the villa where you can seat more than 45 people,” Earhart said.

However, the proposed conference center has an estimated price of $300,000, which Earhart said is too expensive for the estate.

Despite insufficient funds for the expansion of the villino, Villa Le Balze is financially sound, fully funded by the university’s operating budget, according to Earhart.

Although the future of the villa remains bright, with maximum enrollment secured for the coming fall semester, Earhart emphasized the intrinsic importance of the villa for Georgetown University and the larger community.

“It’s not inexpensive to maintain this facility. There are historic grounds. It’s a historic villa. People have come from Australia just to see the gardens, so for the future of this place, it’s important that it be the crown jewel in the crown of Georgetown — that it be this wonderful thing that Georgetown would never touch, that it would always maintain,” he said.

But one aspect of the villa remains out of the university’s control: the ghost of the villa’s founder. According to Earhart, Strong’s ghost has been known to watch students as they sleep, hovering over their beds. As haunting as it sounds, horror enthusiasts will be disappointed to learn that Strong’s ghost remains happy, maybe even pleased as he surveys what his villa has accomplished in the century since its creation.

“People say the villa is life-changing, and it really was. And I think it’s life-changing for people in different ways. It’s just a wonderful, relaxing, academic, enriching kind of atmosphere,” Duncan said.

Steven Piccione is a former managing editor of The Hoya and graduated from the College in August after studying at Villa Le Balze, where he authored this piece.