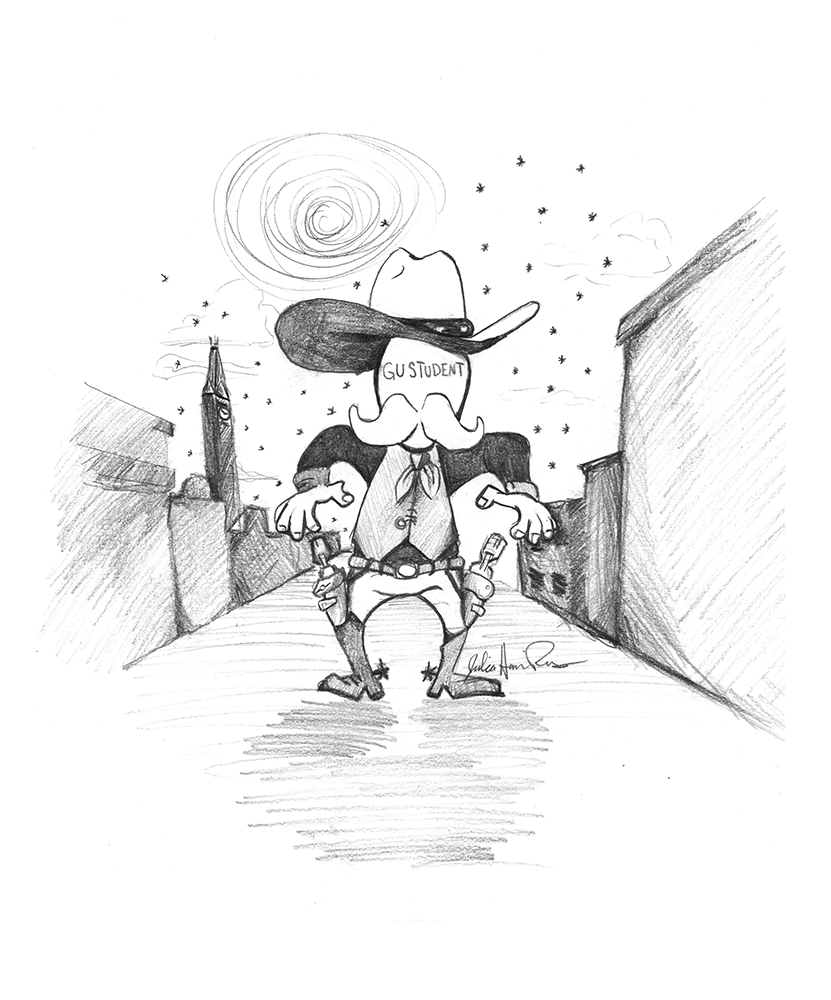 I’m Alex and I’m from Alabama.

It is a seemingly harmless, NSO-esque question that Northerners always ask whenever I reveal I’m from the South. But whenever someone tells me they’re from New Jersey, New York, or some other New England colony, I never think to ask: “What’s that like?”

I immediately want to equalize myself: I grew up in suburbia like most people here, the prep school I went to rivals Andover and both my parents have graduate degrees. But that would just be me throwing my privilege in your face. Nonetheless, I feel the urge each time I am ignorantly asked this question. The question feigns interest but, to a Southern ear, is fraught with social stigmas.

More likely, unfortunately, is that when each Georgetown student simplifies the South to a loaded question, there is power and presumption at play of which I myself have only ever been on the receiving end.

The question immediately creates a divide because I’m not warranted the same inquiry. Growing up, the North seemed like a promised land of Ivy-clad institutions, seemingly more academic and enchanting than the South. The winners write history and thus my peers are exonerated from a similar question because it’s understood: the North is a progressive, liberal oasis. That’s what it’s like “up there.”

I say “y’all” but I hate country music; I miss sweet tea everyday, but I would never let hilltop voGUe feature camo. Needless to say, I cherry pick the aspects of my southern experience. More often, however, the question is much more leading than a litany of southern characteristics.

The question goes, “How could you like all the racism and ignorance and bigotry?!” You’re right. I don’t like any of the racism or the ignorance or the bigotry that happens in the South.

Yet, the simplification doesn’t spark intelligent conversation. It is a mere vehicle for the curious student to aggrandize and apotheosize the power of geographic diversity, and suddenly there exists startling breadth that makes it easy to assume, “Of course you love the North, free of racism and ignorance and bigotry!”

On the contrary, a lot of inequity takes place in the Northeast and all over the country for that matter. Indiana’s religious objections bill, Utah’s execution by firing squad and Connecticut’s failure to protect transgender workers are all backwards, antiquated and retroactive pieces of legislation. But, hey, at least they’re not the South.

Even more applicable, a lot of racism and ignorance and bigotry happens on Georgetown’s campus, not to mention sexism and homophobia and every other form of prejudice imaginable. I thought education was the great equalizer, but when a Georgetown student wears his geographic privilege like a Vineyard Vines sweater one size too small and scoffs at the Southern philistines, my Georgetown degree falls short.

“I would have never guessed you’re from Alabama!”

I know, I know. My hobbies and interests and even my clothing choices don’t necessarily scream “Southern gentleman.”

But I don’t see this as applause for being a Southern outlier; I see it more as a diminutive, as if I succeeded despite my “disadvantaged” Southern circumstances.
I once tweeted that telling someone I’m from Alabama elicits the same reaction as telling them I’m from (insert any developing country here). As if I weren’t afforded the same opportunities as my Northern counterparts, they are consistently shocked that someone from Alabama could be proficient in three languages or could, God forbid, consider himself a liberal democrat.

The surprise comes across as smug pity, as if I were a refugee that the North has saved from the oppression of the South. I have become the “Northern Man’s Burden;” a take on neoliberalism to enfranchise Southerners with agency to make the world a more progressive place.

Of course, there are probably people in the South who could benefit from this new school of thought. And so could the rest of the country. Those not from the South get away with passing as perfectly progressive individuals when, in reality, nobody is. A conversation that creates power dynamics and belittles the other is the paradox. And sometimes passive-aggressive questions hurt more than their forthright counterpart.

As prospective students arrive for GAAP weekend and OAs prepare for NSO, let’s engage in a conversation that erases the Mason-Dixon Line before assumptions gerrymander it. The energy it takes to simplify the South should be redirected to instead promote and learn from each other’s hometown glories.

Alex Ridley is a sophomore in the College.