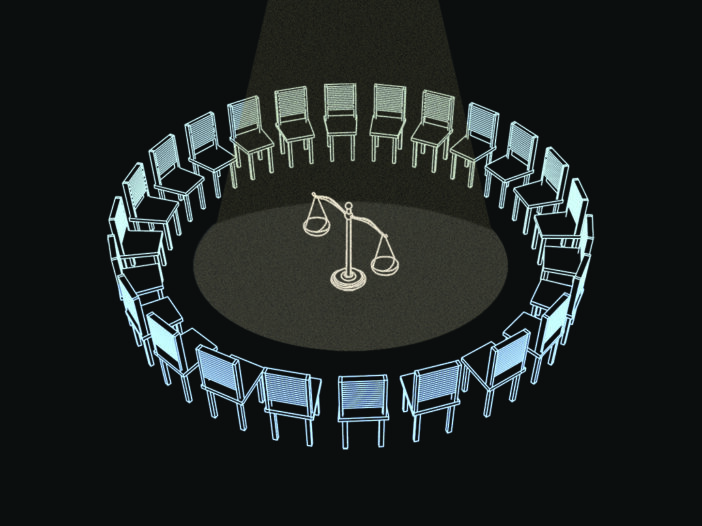 In fall 2020, Felicia Miller (COL ’23) began working on a solution for a problem she had identified in Georgetown University’s disciplinary process — a fully punitive system with no opportunities for restoration or rehabilitation.

For violations ranging from marijuana sanctions to harassment to noise violations, the university punishes students with fines, work hours or written sanctions.

But Miller saw another option: one that focused on restorative justice through conversation between parties and community engagement.

“We’re interested as representatives of the students in introducing new forms of justice that might better serve the community and support students as opposed to punishing them for violations,” Miller said in an interview with The Hoya. “Restorative justice instead is the idea that when harm is committed, you want to restore what was harmed.”

Miller is the policy chair for Georgetown’s Student Advocacy Organization (SAO), a student-led group that supports students through the disciplinary sanction process. Joining with other members of SAO, the organization’s policy and advocacy teams are researching and working with the university to implement restorative measures, according to Miller.

“I led the team through the fall and the spring of last year, and then first semester,” Miller said. “Then we came up with a product at the end, that was a suggestion for a way that the Office of Student Conduct and the university as a whole could potentially begin to implement restorative justice.”

Over the last 18 months, members of SAO have identified central equity issues in Georgetown’s sanction process and code of conduct, and have researched solutions that would approach conduct violations from a restorative perspective, allowing students to rehabilitate their community. Now, as the work continues, the organization is continuing to collaborate with the Office of Student Conduct (OSC) and administrators to implement their proposals.

From Punitive Measures to Community Restoration

Current sanctions are not proving to be equitable or focused on community rehabilitation, a cause for concern within the SAO, according to Max Preiser (SFS ’24), a member of the SAO advocacy team. Georgetown’s Student Code of Conduct relies largely on punitive sanctions, including monetary fines and required work hours for a variety of conduct violations, including alcohol and drug violations, disorderly conduct and harassment.

These sanctions serve to promote students’ development and support the Georgetown community, according to the Code of Student Conduct.

“The fundamental principle guiding the imposition of sanctions in the student conduct system is founded on the University’s effort to balance upholding community standards with the educational development of its students in addressing individual behavior,” the guidelines read.

Yet, these sanctions — especially monetary fines — unfairly target lower-income students, according to Preiser.

“All students are required to pay the same fines if they’re given a sanction, and therefore it’s going to be punitive, and regressive to students who are less able to pay those fines,” Preiser said in an interview with The Hoya.

The policy currently allows for a combination of work hours and fines, and, if students are financially unable to pay fines, they can replace monetary sanctions with work hours.

Students who are unable to pay fines must often choose to substitute them for work hours, which takes time away from jobs, school work and extracurricular activities — a consequence students with higher incomes do not face — according to Brenda Zhong (SFS ’24), a member of the SAO advocacy team.

“The disparities we see are that a lot of the higher income students will pay the fine and a lot of lower-income students are being forced to take on those additional hours on campus to pay it off,” Zhong said in an interview with The Hoya.

The university understands that lower income students may have a more difficult time paying fines, and has thus paused the use of fines as disciplinary sanctions for many first-time violations, according to a university spokesperson.

“OSC is sensitive to the personal and financial challenges facing many of our students during this difficult time of the COVID-19 pandemic and recognizes that fines may be particularly burdensome at this time,” the spokesperson wrote in an email to The Hoya. “Until further notice, fines will not be assigned as a disciplinary sanction for any first-time violations except trash and property maintenance citations. Second-time violations will be assigned fines consistent with the Code of Student Conduct sanctioning guidelines.”

To combat the inequity that develops between students who can and cannot pay the fines, the SAO believes the OSC must implement restorative justice principles, according to Miller.

“It’s always been something that we’ve been interested in because we work a lot with the Office of Student Conduct, which obviously uses punitive justice,” Miller said in an interview with The Hoya.

Restorative justice practices have gained momentum across the country, both on college campuses and within criminal justice systems. What started as a collective resolution to a vandalism spree in Kitchener, Canada, in 1974 soon became a worldwide phenomenon, as Howard Zehr, a professor of restorative justice at Eastern Mennonite University’s Center for Justice & Peacebuilding continued this work. Zehr led trainings, workshops, conferences and reform on the principles of restorative justice and advocated for its implementation.

From Zehr’s work, other universities and criminal justice systems around the country followed suit in implementing restorative justice practices, according to Josh Bacon, former dean of students at James Madison University and director of student conduct.

“Once I saw what restorative justice was about, I was hooked,” Bacon said in an interview with The Hoya. “Anyone who works in conduct in the criminal system, usually over time realizes that it doesn’t work. So we do the best we can to be educational, but it is nothing compared to restorative justice.”

The current punitive system also fails to offer transparency, especially in terms of monetary sanctions, as many students are left wondering what their fines are used for, according to Rishma Vora (SFS ’23), the SAO advocacy team lead for restorative justice.

“It’s really suspicious in terms of where that money is actually going,” Vora said in an interview with The Hoya. “The university isn’t very transparent about, okay, they’ve collected this, you know, essentially a punishment money, like, where’s it going?”

However, the university does use funds collected through fines to assist students and campus initiatives, including the HoyaHub, an on-campus food pantry, according to the spokesperson.

“All fines collected are used to support initiatives that benefit the Georgetown community,” the spokesperson wrote.

While internally the SAO has worked on implementing restorative justice practices since fall 2020, the first concrete action came in spring 2021. SAO representatives submitted a written proposal to the OSC on June 3, 2021, on limiting the use of punitive sanctions and increasing restorative practices in order to create a more equitable sanctions process.

“After discussing the harm, the parties and any other relevant participants — not a hearing officer or conduct board — decide together on actionable steps to repair the harm,” the proposal reads.

In addition to the boards, the SAO proposed a three-step policy reform for bullying and harassment, which includes voluntary participation from all parties, a case-by-case restorative justice “contract” and conferences between parties, focusing on voluntary participation from all parties and aiming to improve community relations, according to the brief.

Many incidents are not directly included in the university’s code of conduct, such as less severe cases of harassment, and cannot be prosecuted directly through the university, according to Miller.

“Introducing restorative justice as an avenue to handle these cases, when they’re not necessarily Code of Conduct cases, can be really valuable to both the harmed student and the student who’s committing the harm,” Miller said.

The SAO wants to go further than all of these practices, however, and eventually establish a Restorative Justice Center, a physical space on campus devoted to restorative justice, according to Vora.

“Our end vision with this entire team and this entire project is to one day establish a Restorative Justice Center at Georgetown,” Vora said. “Generally, just there being a center that’s dedicated towards taking certain cases that happen, and bringing that restorative process and offering students the option.”

After submitting their proposal to the OSC, the SAO has continued to pursue changes to the code of conduct. One team is specifically conducting research into the university’s “More Likely Than Not” off-campus sanction policy, according to Vora.

“We’re trying to gather students’ testimonies and understand their experiences on why and how it’s unfair for students off campus to automatically be seen as more culpable,” Vora said.

The current university policy only requires a “More Likely than Not” standard of proof for off-campus allegations, which means that students are considered guilty if it is more probable than not that the violation occurred.

SAO’s policy team argues that the burden of proof should be higher in order to make the sanctions process fairer, according to Vora.

“The odds are completely not in their favor, just automatically, under that system,” Vora said.

After submitting the proposals, SAO representatives are now focused on the implementation of the policies they have researched, through collaboration with the OSC and other students on campus, according to Miller.

“We started getting into that first semester, but we’re hoping to really ramp that up this next semester,” Miller said. “And see how the SAO can help, whether we can do more research, whether we can look into restorative justice facilitators, whether we can like put them in contact with people that our team worked with, and just offer our help in any way so that the university can get the ball rolling on this project.”

The OSC has made some progress in bettering the disciplinary process, according to the SAO advocacy team, such as raising the minimum wage students receive for work sanction hours to $15.00 per hour, according to Preiser.

The university has also changed its marijuana sanctions, removing a previous policy which stripped students of their financial aid if they were found to be in possession of marijuana, according to Vora.

“Obviously a clear showing of targeting students with low income and directly using that essentially as a scare tactic,” Vora said. “That has since changed.”

The university currently includes certain restorative measures for cases of sexual assault allegations, or in other disciplinary hearings when agreed upon by all parties, according to OSC Assistant Director Heather Kimball, such as voluntary participation, explicit conditions for participation in the alternative process, and an agreement mutually designed by the involved parties.

“SAO named many key components that the Office of Student Conduct employs when facilitating alternative resolution processes,” Kimball wrote in an email to The Hoya. “Depending on the particular needs and desires of the parties involved, we may facilitate a restorative conference or we may facilitate more of a ‘shuttle negotiation’ process to reach an agreement.”

During the 2020-21 academic year, the Division of Student Affairs hosted conferences and meetings for students interested in the implementation of restorative justice, according to Kimball.

“I’ll say that for myself the group, which often practiced restorative circle processes, was also just a wonderfully grounded and connected space as we all navigated the upheaval of 2020,” Kimball wrote.

The Division of Student Affairs will announce future plans this semester for the implementation of restorative practices in the form of a pilot program, which will have outside educators and facilitators run restorative justice circles for students along with university officials, according to Kimball.

While the SAO has made progress on research and early steps of implementation for restorative justice practices, there is still significant work left to be done by students and administrators to emphasize

“That’s kind of where we see that lack of character shown, is that there’s so much talk about these Jesuit values but we don’t really see them really manifesting themselves, at least within the disciplinary system at Georgetown,” Vora said.