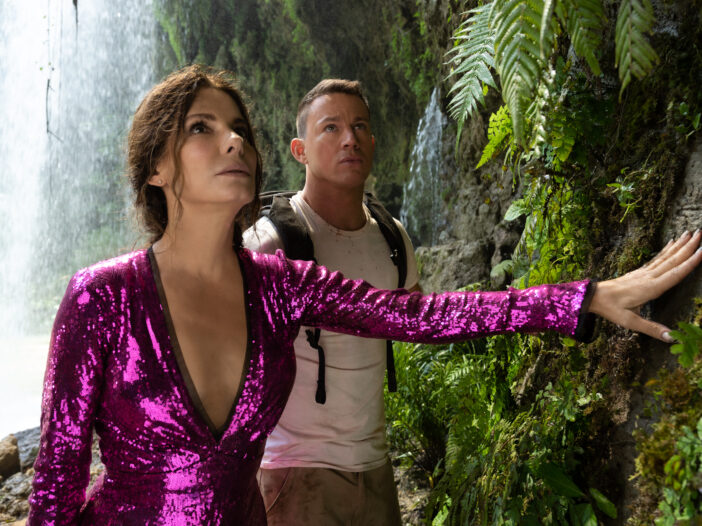 No matter how bad a rom-com is, its negative qualities will, more often than not, be canceled out by the presence of Sandra Bullock.

Hollywood has long had Scream Queens — actresses known for their starring roles in horror films — but Sandra Bullock is a different kind of ruler. Shall we say… a Dream Queen?

Bullock has been acting since 1987, and many of the jewels atop her crown are true diamonds of the romantic comedy genre. “The Lost City” is Bullock’s first foray back into the genre since 2009’s “All About Steve.” And, fortunately, it’s a triumphant return fit for rom-com’s Dream Queen.

“The Lost City,” starring Channing Tatum and romantic comedy master herself Sandra Bullock, is a fun, albeit silly, adventure that uplifts the romance genre and satisfies with its love story, themes of grief and opening up to love again and innuendo-riddled script.

The film opens with successful romance author Loretta Sage (Bullock) lying on the ground of an earthen temple with the golden-haired Fabio of her creation, Dash McMahon (Tatum). The context of their tryst, at first, appears rife with romantic tension, but ultimately it is revealed that the pair is instead being held hostage by the villains of Sage’s newest novel. A final reveal shows that this entire scene is just in Sage’s head — her attempt to come up with the perfect ending to her book.

The switch from lighthearted sensual to life-or-death serious and back to lighthearted again sets the tone for the humor of the entire movie, which is riddled with sexual innuendoes to break up the fast-paced action and tension.

Throughout the film, Sage and Alan Caprison (the model behind Dash, played by Tatum sans the blond Thor wig) traverse through the jungle while also battling through the tangles of their developing emotions and personal struggles.

Sage is a former archaeologist, burnt out from writing romances that do not reflect reality, still healing from the death of her husband and work partner. She rarely leaves her home, preferring to soak in the bath and remember the beautiful times she and her husband shared. Their former archaeological discoveries inspire the settings and historical authenticity of her work, leading to the movie’s villain, a caricatured British billionaire played by Daniel Radcliffe, to hunt her down for her knowledge of a hidden ancient treasure.

While Sage’s fictional character Dash fights off bad guys and monsters, his real-life counterpart Alan Caprison (not pronounced like the juice brand) fights off the misconceptions of those around him, including Sage. As a heartthrob model who is on the cover of every one of Sage’s romance novels, Caprison leans into this Fabio persona to impress Sage and to prevent himself from crumbling under pressure.

But Caprison also wants to prove that he is more than a pretty face, insisting that he accompany Jack Trainer (a cameo role from Brad Pitt) when the ex-military action-hero spoof jet sets to save Sage.

“The Lost City” has charm, but it is not without its faults. Sage’s publicist, Beth Hatten (played by Da’Vine Joy Randolph), could arguably fit the “Black best friend” trope, since her storyline revolves around getting Sage back. But then again, every character’s arc centers on Sage.

The film exoticizes non-American cultures and offers glimpses of inaccurate archaeological practices, but hey, these Brits are evil, so it makes sense. Some of the events of “The Lost City” defy common sense and reality, and some plot points are formulaic for the genre, but it does uplift the romance genre in a world where it is often degraded on account of being favored by women.

There are multiple lines about romance’s financial success, with Hatten retorting that it is the genre that makes the most money in sales per year. Further in the film, when Sage expresses her disillusionment with writing “meaningless” happy endings, Caprison emphasizes the importance and intelligence of romance readers, inspiring Sage to finish her novel with a renewed sense of clarity.

While Tatum presents a good romantic interest, the romance is a little half-baked between the action sequences and Sage’s healing process, but Bullock’s masterful acting could make audiences believe she has chemistry with a soggy log.

Despite its moments soaked in second-hand embarrassment — like when Sage plucks leeches off of Caprison’s bare butt — “The Lost City” offers a good time for viewers because of the charm and emotional control displayed by its star.