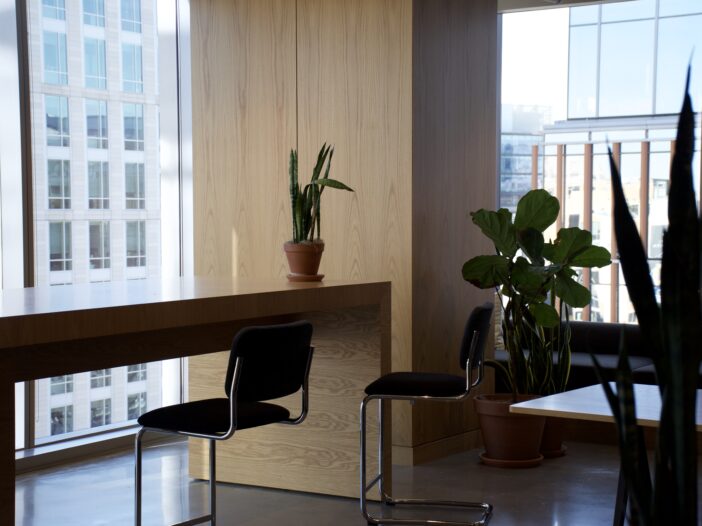 For first-year student Brandon Wu (SFS ’24), who lives in the suburbs of Houston, finding a space for schoolwork has not been easy, especially as winter storms rolling across Texas have eliminated the option of working outdoors.

“For me, my county shut down all public libraries. So, it’s pretty much, like, find an outdoor space, which right now with 15-degree weather is not really looking great, or work at home,” Wu said in a Zoom interview with The Hoya.

With Georgetown University’s decision to partner with WeWork this semester, however, Wu and other students have been able to book indoor workspace for free at one of 800 shared offices worldwide, including locations in 32 U.S. cities. Wu has visited the WeWork location at 1725 Hughes Landing Blvd. several times. Wu’s new study spot offers open floor plans, common and private study spaces, and views of the Houston skyline.

“For me at least, I think WeWork did serve as a good alternative to a space to kind of get away from home, work in a nice setting,” Wu said. “I probably would have been there today for the interview if not for the ice on the roads.”

Georgetown’s partnership with WeWork, unique to the spring semester, gives students who sign up the All Access Benefit membership, with the costs fully covered by the university. The All Access Benefit provides students with unlimited entry to a quiet, shared workspace as well as free printing, staplers, coffee and internet. The centers often feature modern interior designs with colorful and stylish bathrooms, couches for relaxation, and artwork to rest the eyes.

While many students who have used the All Access Benefit have expressed gratitude for the program, it also brings about accessibility concerns because of both the company’s limitations and miscommunications regarding the benefits being offered, leaving certain students confused and unable to fully utilize WeWork spaces.

Being able to work with others at WeWork has hugely improved productivity for first-year student Camber Vincent (SFS ’24). After eight trips to locations in College Park, Md., Washington, D.C., and Arlington, Va., Vincent said he would likely use WeWork spaces all the way through the end of the semester.

“I have ADHD, so I need a lot of background noise to be able to focus on my task at hand, so it’s nice to finally have a place,” Vincent said in a Zoom interview with The Hoya. “That’s why I chose to use WeWork, because I get a lot more work done there than in my own room.”

Vincent has also found going to WeWork to be a good opportunity to meet and work with fellow Georgetown students, especially as winter weather in D.C. makes it difficult to see friends outside.

“Normally, if I was trying to meet up with people, I would do it somewhere outside, but since it’s cold and has been snowing for the past three days, it’s nice to have a place that’s central to meet kids that you already know/from your classes,” Vincent said.

While the main benefit of Georgetown’s All Access membership is the ability to book unlimited hot desks, which are located in common areas where other WeWork members may also sit, students also have access to the university’s collection of WeWork credits that can be used to book private conference rooms, which can be beneficial for students meeting to study, according to an email sent to the student body by Vice President for Student Affairs Todd Olson.

For students living with roommates, WeWork can also be a great way to find a private space to study or take exams, according to Anna Prince (COL ’24), who has used WeWork sites in downtown D.C.

“For me, my roommates were a little bit loud. It was nice to be able to get away from that space and move somewhere a little bit quieter,” Prince said in a Zoom interview with The Hoya.

WeWork has already become popular among Georgetown students, even though the program launched less than a month ago, according to a university spokesperson.

“We have seen a surge of students sign-up in the first few weeks and are glad that students have shown enthusiasm to access these workspaces,” a university spokesperson wrote in an email to The Hoya.

After creating an account, students can book a desk on the WeWork website or the WeWork mobile app. Then, students must bring photo identification to their chosen WeWork location, where they receive and activate a sleek, black WeWork card that they can use to enter the working space later, according to a WeWork informational webinar for Georgetown students.

“Students can easily book workspace on our WeWork app in minutes, making it possible to decide in the morning to visit a WeWork and work from the space that same afternoon,” a WeWork spokesperson wrote in an email to The Hoya.

While WeWork comes with many benefits to those students living in areas with nearby offices, accessing WeWork has not been easy for all Georgetown students. WeWork spaces are typically located in cities, according to the WeWork website. For that reason, students living in rural areas may not be able to reap the benefits of Georgetown’s WeWork partnership, Wu said.

“I think it was a great benefit, but for so many students who don’t live near WeWorks, especially in states that don’t have big urban centers, they’re sort of out of luck,” Wu said.

When Olivia Jones (SFS ’23) first began to use WeWork, she reserved a conference room for herself to have a private space to work, which was included in the All Access Benefit. But after reserving a conference room twice, Jones received an email stating her account was at risk of termination because she had exceeded her credit limit.

“I had no clue we had a credit limit,” Jones said in a Zoom interview with The Hoya. “I looked on my app, and it said 2,000 remaining credits from Georgetown or some very large number. So I thought that I had all the credits in the world. I thought I could reserve conference rooms at least every so often.”

Each Georgetown student is allotted five WeWork credits to book conference rooms or private offices through May 19. The five-credit limit had been shared in both a WeWork informational webinar and in publicly posted FAQ, according to a university spokesperson.

The WeWork informational webinar did not specifically mention a five-credit limit, however, according to a recording of the webinar obtained by The Hoya. The recording only said that Georgetown would be monitoring credit usage, and that students should book conference rooms sparingly.

The existence of a credit limit was not properly communicated to students, according to Jones.

“I don’t know if it’s on Georgetown or if it’s on WeWork, but I definitely don’t think anyone was really aware of the five-credit limit,” Jones said.

Just a few days into the start of the All Access membership, several other Georgetown students, have also received emails threatening account suspension because of excessive credit use, according to Vincent.

The email, sent to all students violating credit limits, said students should have been informed multiple times about their five-credit limit, according to a copy of the email obtained by The Hoya.

“Moving forward, your conference room bookings will be monitored closely and non-compliance will lead to the loss of your WeWork All Access membership,” the email said.

However, Jones said she had not received any emails indicating a credit limit before WeWork threatened to terminate her membership.

WeWork communicated directly with students regarding credit limits, according to a university spokesperson.

“WeWork has sent reminders to all students, and also proactively reached out to those who have exceeded their credit limits, to encourage them to utilize the free, non-credit spaces available for bookings,” a university spokesperson wrote.

Five credits can typically book between one and a half and five hours in a conference room, depending on the size of the room, according to the WeWork webinar. WeWork also charges students more credits to book conference rooms during peak hours, the webinar said.

Because conference rooms and offices cost so many credits to book, five credits is not sufficient to satisfy students who want to regularly work with their peers, according to Vincent.

For this reason, Vicent said he would likely not use a conference room at all.

Prince does not use credits herself, instead choosing to work at hot desks or private phone booths at WeWork. She was grateful, however, that a member of the WeWork team personally explained the logistics to her when she first arrived at an office.

“When I set my card up they said, ‘Some Georgetown students didn’t understand that there was a five-credit limit, just know that.’ So I was like, “Well, thank you for telling me because I don’t know how else I would have figured that out,’” Prince said.

While exposure to COVID-19 at WeWork sites is a concern, students at the sites themselves do not feel unsafe, as people in common areas are required to wear masks, according to Prince.

“I’m not in a common space right now, which is why I’m not wearing a mask. But when I’m in the common spaces, I’ll always wear them,” Prince said during her Zoom interview at a WeWork space.

On the other hand, Wu regularly saw WeWork users sitting in common areas with their masks off at locations in Houston, although maintenance staff seemed to frequently be sanitizing those areas, he said.

“The janitor’s staff were coming by every fifteen minutes or so, wiping down tables, making sure everything was clean. There was hand sanitizer available everywhere,” Wu said.

WeWork has prioritized cleaning and mitigating the spread of COVID-19, according to a WeWork spokesperson. Their plans have been audited and endorsed by a health and safety inspection company, according to the WeWork website.

The safety of WeWork locations remains a concern, however, as new COVID-19 variants spread rapidly around the country and cases increase in the Georgetown community.

Considering these new strains, Jones also had concerns about seeing masks down at WeWork.

“It seems a little worrisome to be in a big space where there’s people who are not wearing masks,” Jones said.

Despite maskless patrons and miscommunications surrounding credit limits, the WeWork experience has been a positive one for many Georgetown students, like Prince.

But as another semester of online school passes by, Vincent plans to tap his All Access card frequently to make the best of things, taking advantage of the comfortable workspace, closeness to peers and many amenities while he can.

“It’s a good place to get work done. It makes me very productive,” Vincent said. “It’s nice to just get conference rooms with other kids and work together and study together. ”