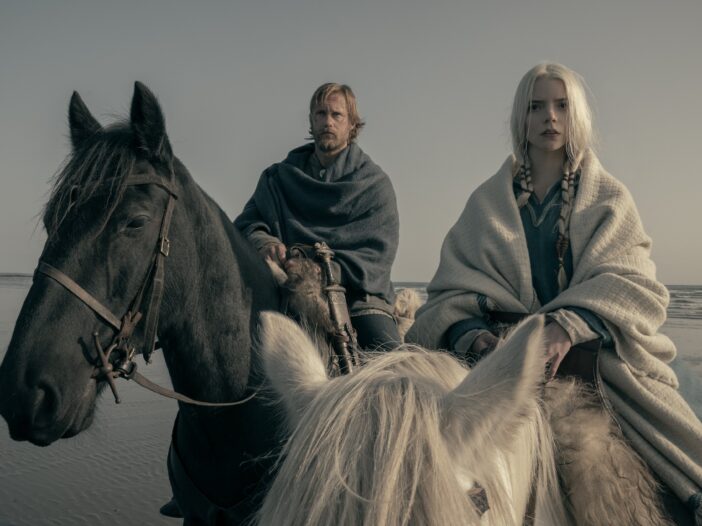 Film fans weary of stale action movie cliches, fear not: “The Northman” has arrived to carry out its pledge of vengeance — and offer moviegoers a thrilling cinematic experience.

Replete with guttural Viking chants, hypnotic cult-like imagery, and nude volcano-side swordfights, “The Northman” takes audiences on an immersive ride through the Scandinavia of 914 A.D. Mesmerizing performances, jaw-dropping cinematography and the screenwriters’ courage to apply a morally nebulous perspective to a revenge-driven narrative all solidify the movie as a certified masterpiece.

The young prince flees his home and spends years plundering villages as a ruthless Viking, until a seeress reminds him of his duty to avenge his father and rescue his queenly mother (Nicole Kidman) from his uncle’s clutches.

“The Northman” avoids tedious exposition in its introduction, as Amleth’s growth from hopeful young prince to brutal Viking marauder is stripped down to only its most essential narrative beats. The script uses this fast-paced opening to grab the audience’s attention, and then applies more deliberate pacing to showcase Amleth’s quest for revenge.

That quest might not have been at all engaging without Alexander Skarsgård’s enticing performance, as he brings Amleth’s character to life. Skarsgård dives headfirst into his character, literally howling with the ferocity of a wolf and sauntering with the brutish intensity of a bear.

Yet Skarsgård’s performance is much more than snarls and muscle-rippling stunts — his occasional tear-filled gazes and quiet, anxiety-infused whispers indicate that beneath Amleth’s battle-hardened surface lies the heart of a broken boy yearning to be loved.

This complex characterization of Amleth is what makes “The Northman” special. Unlike most revenge thrillers, this film’s protagonist is not always heroic — on the contrary, many might describe several of Amleth’s actions, like burning civilian villages, as morally reprehensible.

But those seemingly bloodthirsty acts are offset by Amleth’s vulnerability and unyielding loyalty to his late father. The film trusts its audience members to decide for themselves whether Amleth is deserving of praise or chastisement by the story’s conclusion.

Kidman uses a forceful tone and proud authority to transform her royal character from a damsel-in-distress into a powerful, cunning leader. Taylor-Joy, who plays Amleth’s love interest, matches Kidman’s commanding presence with wily smirks and sensual movements, completing the film’s layered representation of female rebellion against a culture dominated by brutish men.

The film’s towering performances are matched by its breathtaking imagery. The cinematographer balances sweeping shots of icy mountains and burning villages with claustrophobic, hallucinatory moments to create a uniquely visceral feast for the eyes.

This visual juxtaposition mirrors the film’s narrative duality: fantastical, allegory-rich scenes depicting royal family trees and Valkyries riding into the heavens stand in stark contrast to Amleth’s grounded, straightforward mission to avenge his father. Eggers weaves together these contrasting elements to form a seamless narrative, exploring how Amleth is bound to his quest by supernatural forces beyond his comprehension.

The style of “The Northman” will not satisfy every viewer. The thick Norse accents and low, gravelly whispers of certain characters occasionally distort their dialogue, and the gory disembowelments and beheadings are likely to shock even the least squeamish viewers. Because it is so committed to accurately representing its setting, the film often feels designed to repel.

But for those willing to crawl through that repulsive layer, “The Northman” provides immersive thrills. Eggers offers his audience a window into the conflicted heart of a blade-wielding Viking prince who stands alongside Inigo Montoya, Django, and Maximus as one of cinema’s most captivating revenge-driven protagonists.

Go forth and watch this film on the biggest screen possible, lest you be slain by the Night Blade at the Gates of Hel.