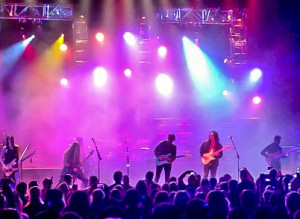 The Warner Theater played host to the Generation Axe Tour, a unique super-group comprised of five of the world’s most respected virtuoso electric guitarists on April 24. No stranger to hosting some of the world’s biggest names, including Duke Ellington, Frank Sinatra, Jay-Z and The Rolling Stones, the Warner Theater retained little of its early-20th century atmosphere, as it was filled by the scream of high-output amplifiers and signature series guitars for the duration of the three-hour set.

As if going back in time 30 years, one would think leather pants, screaming guitars and big hair were still in vogue as the crowd anxiously awaited their heroes to emerge from behind the wall of Marshall amplifiers. Tosin Abasi, Nuno Bettencourt, Zakk Wylde, Yngqie Malmsteen and Steve Vai each represent unique periods in the history of shred, and have adorned the walls and filled the imaginations of music fans for more than three decades. While their music may no longer garner noticeable airtime on FM radio or make headlines in the popular music scene, these men are at the pinnacle of a genre, and a following, entirely their own.

Without an opening act, there was no pretense that the night was about anything else than an appreciation for the world’s most accomplished and influential instrumental guitarists. The set kicked off with a high-octane interpretation of Boston’s “Foreplay” with all five members of the group on stage, taking turns soloing in their own distinctive mind-blowing style. Within minutes, it was clear the earplugs handed out at the front door upon entry had a purpose beyond aesthetics.

Washington, D.C., native Tosin Abasi, the youngest of the group, has gained notoriety as the lead guitarist of the band Animals as Leaders and for his unique style of heavy, riff-oriented progressive metal. In an aside to the audience, Abasi mentioned the Warner Theater was the nicest and most comfortable venue he had ever played in D.C. As the others departed the stage, Abasi remained to perform a selection of his songs, including “Tempting Time” and “The Woven Web,” before being joined by the long-haired Nuno Bettencourt to perform a new joint composition entitled “Physical Education.”

Stylistically the heaviest performer of the night, Abasi employs atonal melodies with complex tonal arrangements that bemuse even the most talented guitarists. Following their duet, Nuno Bettencourt explained that he could have played along better if he could ever understand Abasi’s chordal structure or method of melodic arrangement.

The next performer, Nuno Bettencourt, has tantalized audiences with his incredible dexterity for nearly 30 years as the lead guitarist of Boston-based rock band “Extreme.” The group rose to international prominence following the release of their 1990 album “Extreme II: Pornograffiti.” A signature artist for both Washburn Guitars and Roland Amplification, Bettencourt mesmerized with performances of “Flight of the Wounded Bumblebee,” his interpretation of Nikolai Rimsky-Korsakov’s “Flight of the Bumblebee,” and “Get the Funk Out.”

After teasing the intro of Extreme’s most well known song, “More than Words,” then laughing “Nah, not tonight,” Bettencourt played the most unexpected – and unique – song of the night, the acoustic “Midnight Express.”

Following a medley of his most well-known solos, inspired by a compilation video he found on YouTube, he was joined by Black Label Society and Ozzy Osbourne guitarist Zakk Wylde for a cover of Citizen Cope’s “Sideways.” Wylde, introduced as a man with a heart bigger than his biceps, proceeded to cover Black Sabbath, Jimi Hendrix’s “Little Wing” and The Allman Brothers’ “Whipping Post.”

While Wylde’s solos during these songs included the excitement of him walking out into the audience to play beside adoring fans, they appeared somewhat over-indulgent and did little to display any aspect of his personal style other than his incredible speed. The greatest disappointment of the night, however, came with the appearance of neo-classical shred guitar’s most influential figure, the Swedish Yngwie J. Malmsteen.

While his ability is showcased on such legendary albums as 1984’s “Rising Force,” Malmsteen’s playing relied largely on tricks and the introduction of excessive flair during renditions of fan-favorites like “Arpeggios from Hell” and “Far Beyond the Sun.” The latter became almost unrecognizable before it was cut short by a transition to “The Star Spangled Banner,” and Malmsteen throwing his signature model Fender Stratocaster guitar offstage to his guitar tech. Malmsteen’s performance was saved when perhaps the most commercially successful and universally respected member of the group, Steve Vai, joined him onstage for a performance of “Black Star.”

Vai’s set included one of his greatest hits, “Tender Surrender,” from his 1995 album “Alien Love Secrets,” alongside newer compositions including “Now We Run” and “Gravity Storm.” Vai’s style is built around a heavy use of the whammy bar, sweep picking, legato and two-handed finger-tapping patterns. Having learned a great deal from legendary instrumentalist Joe Satriani as his personal student, Vai gained notoriety for his rigid practice schedule of 10 to 15 hours per day.

The closing moments of the show saw all five members rejoin onstage for a performance of Deep Purple’s “Highway Star,” featuring Yngwie Malmsteen on vocals and solos from each guitarist over the relatively basic groove.

Overall, the evening was an incredible and unmatched showcase of some of the most technically accomplished guitarists of all time. Although their music may have declined in commercial popularity, their craft is impossible to ignore and their talent impossible to respect. While the self-indulgence and inflated ego of Zakk Wylde and Yngwie Malmsteen, respectively, may have detracted from the show overall, the showmanship and affability of Nuno Bettencourt and Steve Vai gave fans more than they could have imagined over the course of the three-hour night.