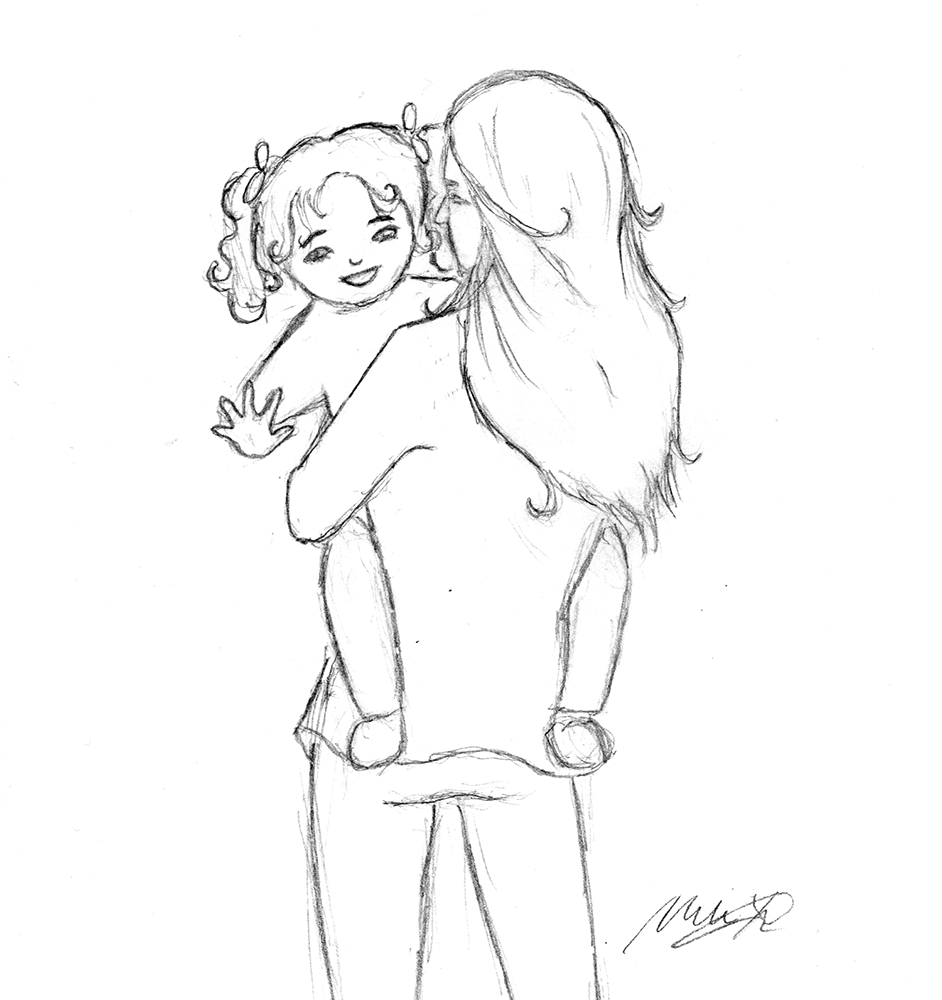 The semi-truck headed north on the 490 split. Tim pointed his car down the on-ramp, careful to speed up just enough to be uncomfortable with how quickly the traffic on his left was approaching. He reached the yield sign, flipped on his blinker and turned the wheel with gentle precision — just enough to clip the bumper of the semi-truck. With a growl, metal merged together; the truck dragged Tim’s car for a mile as the driver tried frantically to slow down. Tim let it all happen.

He watched the car accident from above, as if it was someone else sitting in the driver’s side of the car. He heard metal crunching, glass breaking, tires skidding. The 18-wheeler overturned. The airbags deployed. He marveled at how well timed it all was.

He looked at the chain hanging from his rearview mirror — an eclectic mix of rainbow beads that his daughter had made — closing his eyes to the destruction ahead. He welcomed the airbag as it engulfed the entirety of the space between him and the wheel. Tim welcomed the heat against his face, welcomed the crack of his glasses as they broke in half. He faintly heard the windows shatter, glass kissing the skin on his arms and his bald head. He welcomed the darkness that surrounded him.

Tim thought of his daughter once more — her bright blonde curls and big blue eyes, a slight ping to his heart.

He hoped he was leaving the world for good.

When Tim woke up in the hospital, he first saw the wrinkles in his wife’s face as she leaned over him. They were like rings in a tree, years of her life she had spent caring for him, years that she could not get back. Years of therapy, pills, long nights that turned into days on the couch. He didn’t remember when Ann went gray, but then again, he hadn’t noticed how bald he really was, or how thick his middle had grown. It pained him to think about how much he hurt her — and here he was, doing it again.

Blonde curls peaked over the side of the bed, catching Tim’s eye. Of course, Ann brought her, he thought, pain licking his insides. He was humiliated to let his daughter, his princess, his angel, see him this way. He looked back at Ann’s eyes, full of worry and sadness. She stretched her hand out for Tim’s and put her other on top of Eva’s curls.

“I’m going to call Dr. Meyers. Maybe he can come down to see you now.”

Her voice trailed off. She leaned in to kiss his forehead and squeezed his hand once more before pulling Eva into her arms. Tim watched Eva bounce slowly up and down in rhythm with Ann’s steps. She blew kisses to him, her small hand moving away from her mouth with crinkled fingers.

“Bye bye, Daddy.” A smile rose to his face. He had forgotten what that felt like, a pleasure so foreign in his life now. A flash of light across his dark horizon.

Somewhere deep inside him, Tim knew he needed help, but he had nothing left in him to call out, nothing left to fight with. The darkness had been present all his life, but recently it was everywhere. Days all blurred together. Meals were skipped, other meals binged. His daughter had stopped begging him to play outside. His wife stopped expecting affection altogether. It was like he was working part time in life, allowed to scrape by on the bare minimum requirements.

Tim brought his hands to his face. Tubes and sensors and wires moved with him, pulling uncomfortably at his skin. He glanced at the machines beeping and whirling beside him and realized with horror that he was on a slow morphine drip. Why can’t they just let me go? If Tim had believed in God, he would have pleaded for an end, but what God existed that could let a man suffer this long?

Tim heard scuffling along the floor. A nurse entered the room.

“Hi there, Tim,” she said. Her voice was excessively sweet. “It’s good to see you awake. It’s time to take your pills now.” She handed him a cup with two large white pills and an orange one.

“What are they?” He asked. His voice was rough and indifferent.

“Ah, well, there’s a nice antibiotic to help with your healing, and then your anti depressant to help with some internal healing. You know, right here and here.” She motioned to her heart and her head.

“Get out. I’m not taking antidepressants anymore. I’m done.”

“Well now, Tim, you’re hardly in a place to say no. This is your usual dose.” The pleasantness slowly faded from her tone.

Tim closed his eyes and saw his daughter playing in her sandbox. She was only 18 months and kept putting fistfuls of sand into her mouth. He remembered laughing with Ann — she was not yet gray then. When Tim opened his eyes, the nurse was glaring at him.

“Fine,” he conceded, holding out his hand. She placed the pills in one hand and poured him a glass of water. The pills tasted like rust and dandelions. He took a big gulp of water and swallowed hard. The nurse checked that he had indeed swallowed and sauntered out of the room.

Tim lay back against his pillows and closed his eyes. He hoped he would sleep for a long time.