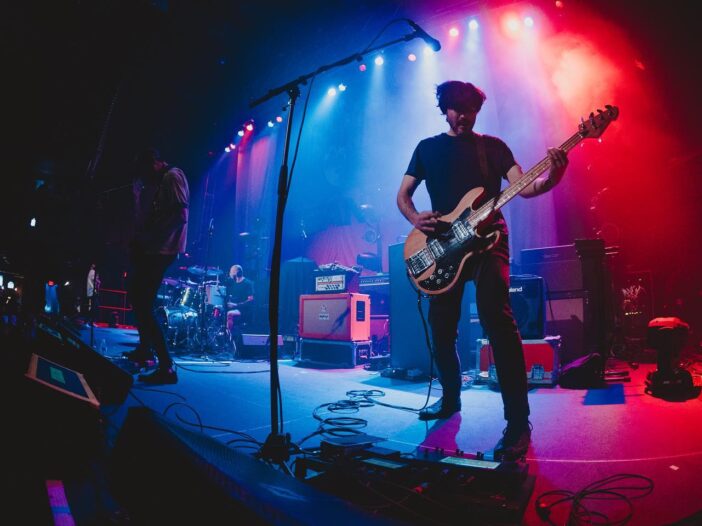 As a kind word of advice, do not arrive at a punk show with a headache or weak arms. It is going to get loud, rowdy and irresistibly intoxicating.

Microwave, Mom Jeans. and Joyce Manor all lit up Manhattan’s infamous Terminal 5 venue on April 22. The pop-punk trio of bands opened for The Story So Far, with the four united on their nationwide spring tour. This unusual group collaboration meant that even before the show could start, the sold-out, 3,000-capacity venue was crammed from head to toe, signaling an exciting prelude of events to come.

Beginning the show with a short but sweet setlist, Microwave electrified the audience from their first chord of the fan-favorite “Lighterless” all the way to their newest single, “Circling the Drain.” The ear-splitting, crashing riffs of each tune had the crowd agape with awe, and Microwave’s thunderous stage presence left the audience exactly the way they started: desperate for more.

Similarly, Mom Jeans. performed like they had something to prove and with a discography half the age of their counterparts of the night, perhaps they did. Nearly every melody of Mom Jeans.’ performance was laced with drummer Austin Carango’s lyrics of depressed longing, from love to friends to existentialism. Despite the tone of these songs, the audience used every opportunity to cathartically moshpit with smiles across their faces.

From a three-part “Happy Birthday” singalong to the band’s bassist, Sam Kless, to a shameless reveal of lead singer Eric Butler’s tramp-stamp inspired by new song “White Trash Millionaire,” and the constant egging by the band to get the crowd even more riotous, Mom Jeans. never hesitated to push their boundaries of what a concert could include.

Kicking off with their hair-raising 2014 hit “Catalina Fight Song,” Joyce Manor’s intensely devout fans within the crowd could not hold back their excitement, dancing and screaming to every lyric. Between the band’s quick song shifts and a notorious knack for one-minute songs, Joyce Manor electrifyingly never left the audience with much room to recover — or breathe between songs.

Additionally, the rather soft demeanors of Joyce Manor’s band members slowly dissipated throughout the show, eventually erupting into an energetic, rowdy and extroverted stupor that lived through every note and beat.

However, it became audibly clear who the headliner was when lead singer Parker Cannon and members of The Story So Far walked across the stage for the night’s final act.

The most popular song from their 2013 EP, “Clairvoyant,” started the show off on a different note from the rock that came before. The song’s slow, acoustic instrumentals and crooning melodies altered the ambiance of the room to be more calm.

Nonetheless, the band carried the rest of the night with pop-punk hits like “Empty Space” and “Nerve” while the audience crowd-surfed multiple, sweaty twenty-somethings across their heads. Crowd surfing was at an all-time high at that time of the night, with passionate fans embracing every word Cannon sang to them.

Yet, The Story So Far seemed to be more reliant on flashy strobe lights and high-tech instrumentals to offset energy derived from the crowd. Likely, this is due to the band calming down their stage presence after a violent reputation followed them on previous tours when the band physically kicked a fan off stage in Toronto.

However, each bands’ small-town beginnings brought a sense of comfort to the chaotic crowd. Joyce Manor’s guitarist was seen casually conversing with a few fans around the merchandise line, and Mom Jeans.’ bassist Sam Kless stood on the outskirts of the stage to support the headliners of the night and relish in the noise.

Amidst the rowdiness of performers, angsty headbangers and mosh-pitters, the four bands and the audience matched each other’s energy to put on a show that felt straight out of a fever dream. Though my body might have felt weak and on fire, I embraced every second.