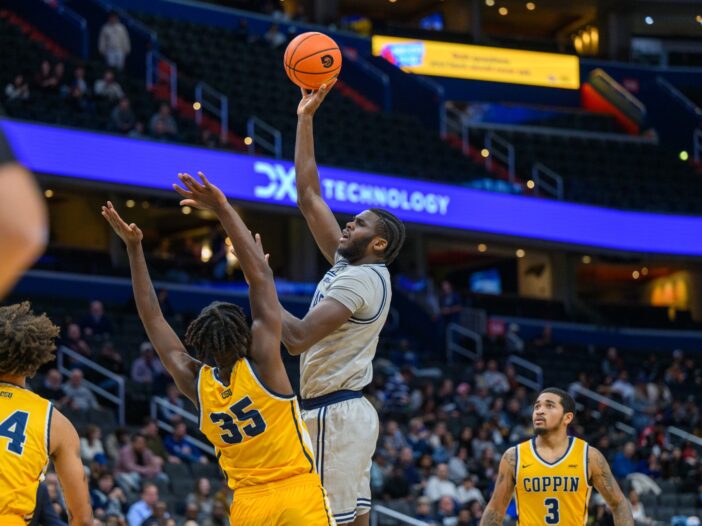 Entering the 2022-23 season, the Hoyas needed help. Last year, Georgetown finished winless in the Big East, ended out the season with 21 consecutive losses for a final record of 6-25, and closed the book on its worst season since the 1970s. In Georgetown’s search for a resurgence, the program turned to the transfer portal, and retooled with the No. 4 transfer class in college basketball.

This busy offseason was much-needed. The team lost ten players, including four of its top five scorers, either to the NBA draft or to the transfer portal. Now, Georgetown will pair its seven transfers with three incoming first-years to fill the hole.

Murray will immediately step in as the Hoyas’ first option after the departure of Aminu Mohammed, who spent one season on the Hilltop before declaring for the NBA draft. At Louisiana State University, Murray averaged 10 points per game and earned a nod to the South Eastern Conference’s All-Freshman Team.

The Hoyas were able to lure Murray to Georgetown largely because they hired assistant coach Kevin Nickelberry from LSU. According to Head Coach Patrick Ewing (CAS ’85), Nickelberry will handle the defensive schemes.

Murray said Nickelberry played an instrumental role in his transition to Georgetown.

“That’s my guy, he’s real important to me,” Murray said during media day. “Having a familiar face around has definitely made me more comfortable.”

But Murray says his desire to become a Hoya goes deeper than reuniting with Nickelberry — he also wants to return Georgetown to its glory days. Murray told The Hoya he wants to revive the glory of Georgetown, a school that feels close to home because of his Maryland roots.

In order to achieve this goal, the Hoyas need to become effective leaders to restore the program, Akok said.

“The history of the program, the players that used to come from this program, we’ve got to lead the right way and also lead for the future guys that are coming here as well,” Akok said in an interview with The Hoya.

The 6-foot-10 forward has been plagued by injuries during his career, but he says he is now healthy.

At UConn, Akok developed a reputation as a high-energy player. With his new team on the Hilltop, he said he hopes to have a similar impact, leaving it all on the floor.

“I give my maximum effort every time I hit the floor,” Akok said. “I love to run in transition, get lobs, block shots, it’s really my game.”

Though Murray and Akok are newcomers to the Hilltop, Hoya fans should recognize one name: Qudus Wahab. The 6-foot-11 center spent two seasons at Georgetown, where he helped lead the team to a Big East tournament title in his sophomore year.

After making the shocking decision to transfer to the University of Maryland last year, Wahab said he has already seen a cultural shift within the program.

“The culture is changing and the mentality is changing,” Wahab said. “We want to bring Georgetown back to the top.”

Murray said the team is proactively trying to get everyone in sync.

“New coaching staff, new players and everything, I feel as though we’ve really done well gelling together,” Murray said.

Wahab echoed Murray’s sentiment and discussed how the coaches have been trying to get players to develop chemistry.

“The coaches have been doing a great job getting us together, I remember in the first few weeks we went to Top Golf,” Wahab added. “The chemistry is getting there.”

Murray, Akok, Wahab, Spears and Mozone all started in the Hoyas’ season opener against Coppin State and led the team to its first win in 328 days. Georgetown will continue depending heavily on them to avoid spending a second season as the laughingstock of the Big East.